Organizers are trying to revive last year's protests, which had halted due to the coronavirus pandemic. The second week of September also saw violent protests in the country. 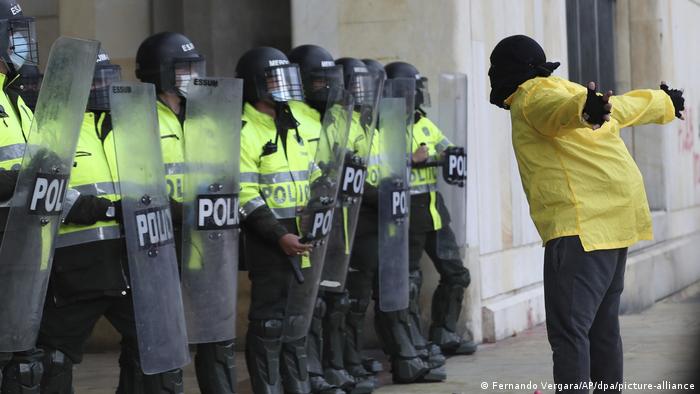 Nearly five thousand Colombians showed up to protest on Monday, taking a stand against the current economic crisis and recent incidents of police brutality.

Protests began peacefully in the morning, with a demonstration of vehicles at the labor ministry, organized by major unions. However, towards afternoon, some violent protesters attacked a bank and some private property in the city center of the capital city of Bogota.

The violence was low compared to the second week of September when protests had claimed 13 lives and left many injured.

Police used tear gas to control crowds but reportedly refrained from using violence. Bogota shut down public transport towards the night, as the mayor urged people to stay indoors.

"I'm protesting for my rights because it's not fair for them to take someone's life. There's so much aggression and corruption," 19-year-old student Alejandro Ortiz told Reuters.

As Colombia has lifted a five-month lockdown, organizers are trying to revive last year's protests against President Ivan Duque.

Protesters asked for more workers' rights, better pension, and health care after a government decree made it easier for employers to pay workers by the hour.

Demonstrators also called on the president to stop massacres by armed groups. This year alone, more than 60 such massacres have claimed over 240 lives, according to the NGO Indepaz. Two killings that took place this weekend have claimed at least 10 lives.

Rebel groups and drug traffickers are considered responsible for the violence after a 2016 peace treaty was rejected by a guerilla movement, led by the National Liberation Army. The groups are fighting for control over illegal mining, drug trafficking routes, and cocoa plantations.

Earlier protests were stopped due to a rising number of infections. Nearly 765,000 Colombians have been infected and more than have 24,000 died. Unemployment rates in urban parts have risen to 25%, and the government expects the economy to contract by 5.5%.