In the first rally since First Minister Nicola Sturgeon said she wanted another vote on Scottish independence, tens of thousands of people marched in support in Glasgow. The rally was twice the size of the one last year. 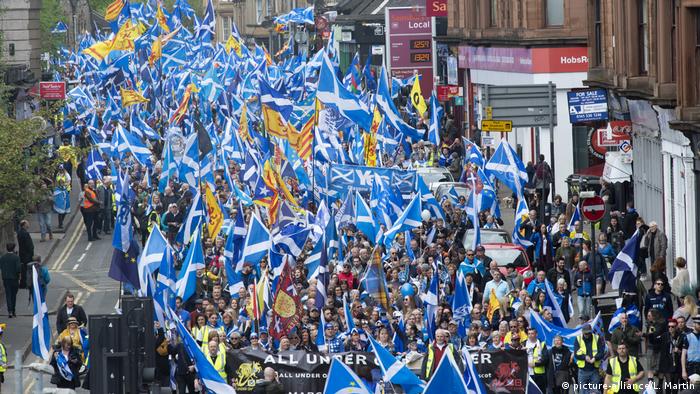 Organized under the "All Under One Banner" (AUOB) slogan, tens of thousands turned out with Scottish flags in Glasgow on Saturday.

It is the first rally since First Minister Nicola Sturgeon said last month that she would introduce new legislation to stage a second independence referendum by May 2021, the end date of the current government in Holyrood.

There was a carnival atmosphere in Glasgow on Saturday afternoon with bagpipes and drums intermingling with calls for "Independence now." AUOB says it is "open to everyone who desires an independent Scotland."

By mid afternoon, organizers estimated 75,000 had joined the rally.

A much smaller crowd of 35,000 had attended a similar event last year, according to the police. 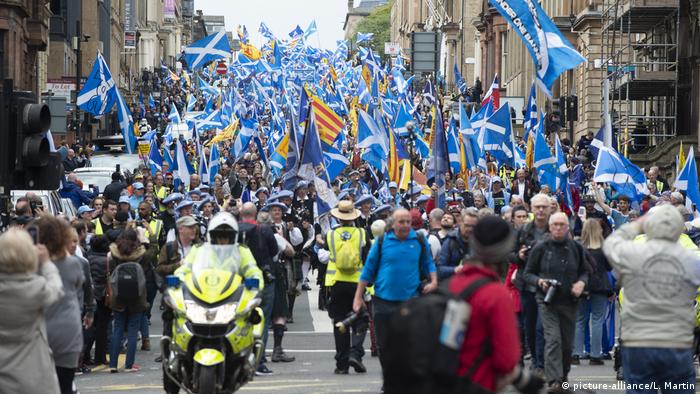 Sturgeon's Scottish National Party (SNP) is campaigning ahead of the European elections later this month on a "Stop Brexit" platform, in a bid to reinforce Scotland's support for staying in the EU. The SNP is expected to win three or four of Scotland's six seats in the European Parliament, with Labour and the Conservatives taking one each.

Sturgeon said that Brexit would have a catastrophic effect on Scotland's economy and that Scottish voters should have the option to choose independence from the UK. Voters in Scotland in 2016 voted overwhelmingly (62%) to stay in the European Union.

The SNP is on course to gather 40% of the Scottish vote for the European elections, with Sturgeon confirming last week to her followers at the SNP conference: "Scotland's not for Brexit, Scotland's for Europe." Just under 4 million of Scotland's total 5.25 million population are registered to vote.

Speaking at the Scottish Conservatives' conference in Aberdeen on Saturday, leader Ruth Davidson said she would resist any new referendum on independence.

The devolved government in Edinburgh cannot hold a referendum without being granted the powers to do so by the Westminster government in London.

A spokesman for Prime Minister Theresa May said last month: "As we have been repeatedly clear, Scotland already had an independence referendum in 2014, and voted decisively (55% to 45%) to remain in the UK. This should be respected," he said. Support for the Conservatives in Scotland has dropped 5% since last autumn to 22%, according to the latest polls.

The All Under One Banner has marches planned across Scotland throughout the summer, with the events ending in Edinburgh on October 5.

A day after Prime Minister Theresa May presented the UK-EU draft withdrawal agreement to her Cabinet, a slew of ministers have quit in protest at the deal. Rob Mudge takes a look at who's gone so far. (15.11.2018)