Around 15,000 people have gathered in Helsinki to protest against racism and violent right-wing extremism. The protests were sparked by the death of a man who was reportedly attacked by a neo-Nazi group. 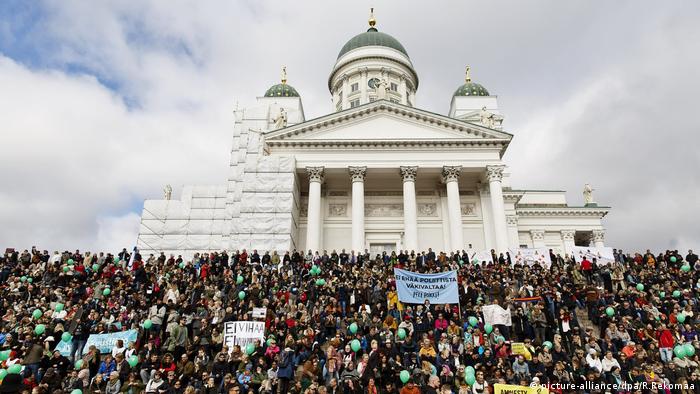 Finland's premier and a former president joined thousands of people across Finland on Saturday as part of demonstrations against violence, racism, and fascism.

In Helsinki, police tweeted that around 15,000 people were taking part in the protest there, while thousands of others attended similar demonstrations in other Finnish cities.

"People are coming out for the right reason, because the rise of violent extremism is a concern to the large majority of Finns," Finnish Prime Minister Juha Sipila told Finnish radio YLE.

Sipila joined a march in the central town of Kuopio and vowed that the government will soon introduce new measures to tackle the problem of extremist groups.

Participants in Helsinki wound through the Finnish capital blowing whistles and carrying green balloons as well as signs which read: "No to Nazism."

Smaller counterdemonstrations with the slogan "Close borders!" were also held in the city, but police separated the two groups and have reported no clashes. 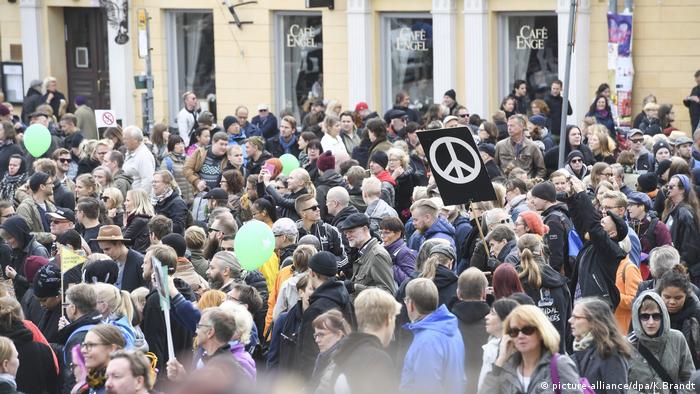 The original protest in Helsinki was organized by a Facebook group under the slogan of "Enough is enough" following the high-profile killing of 28-year-old Jimi Karttunen.

Earlier this month, Karttunen reportedly stopped to spit in front of neo-Nazis who were holding an anti-immigration rally in Helsinki. He was then allegedly kicked in the chest and knocked down onto the ground where he hit his head. Karttunen died of his injuries on September 16.

"Violent right-wing extremism has grown stronger and one brave soul that dared to challenge it has paid the price with his life," wrote the demonstration organizing group on Facebook.

A 26-year-old man, Jesse Torniainen, who is a well-known neo-Nazi leader, has been remanded in custody on suspicion of assault and aggravated involuntary manslaughter. Torniainen, who is a central figure in the far-right Finnish Resistance Movement, has denied any responsibility.

Former Finnish president Tarja Halonen held a speech during Saturday's rally, which concluded with a moment of silence for the deceased 28-year-old.

On the alert against right-wing extremism

In the Interview: Stephan Kramer, Office for the Protection of the Constitution, Thuringia/Germany (20.03.2016)

The first half of 2016 has already seen some 98 far-right musical events in Germany, with some concerts drawing thousands of fans, reported "Die Welt." Authorities have warned that such events serve as recruitment tools. (20.08.2016)