As many as 4,000 migrants have been evacuated from the Moria camp after a major fire broke out at the facility. Some 150 minors were taken to a children's village on the island. 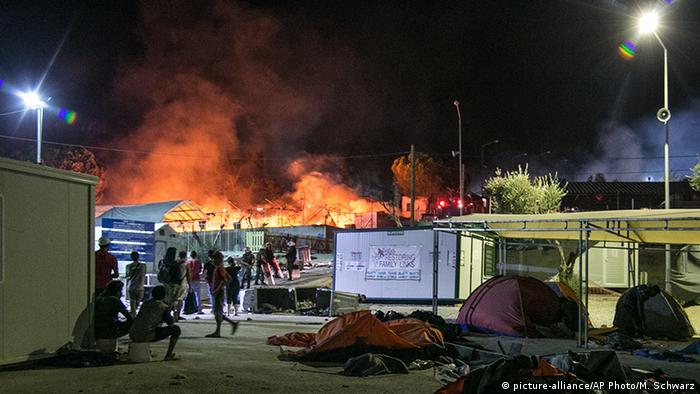 Thousands of migrants fled one of Greece's main migrant camps as the blaze took hold on Monday evening, police said.

A police source told the Agence France-Presse news agency that strong winds were fanning the flames at the Moria camp on the island of Lesbos.

He said there was "no doubt" that the fire had been set on purpose by those inside the camp, where brawls regularly break out among migrants, angry at long processing delays and the possibility of being sent home.

Earlier on Monday, tension rose in Moria after a rumor spread that migrants were about to be deported en masse to Turkey, state agency ANA reported.

Two other fires were started in the olive groves close to the camp earlier in the day, but were brought under control.

It was not immediately clear how extensive the third fire was.

Later, Lifeguards Hellas said the fire was under control and that families had started returning to the camp.

Volunteers have begun to distribute water and help migrants in total darkness, the charity said on Twitter.

Human rights groups have long complained about the conditions in Greek migrant camps, which they say are overcrowded and unsanitary.

The situation is particularly dire on Lesbos and other eastern Aegean islands facing Turkey, where most of the migrants land and are held for registration.

According to Greek government data, there are over 13,000 people on five islands in facilities built to house fewer than 8,000.

Around 5,400 migrants and other refugees are staying on Lesbos, while there is organized accommodation for 3,500.

Also on Monday, officials said the number of migrants reaching Greece had risen sharply in recent days, despite an EU-deal with Turkey, where many of the refugees begin their journey, to ensure they remain on Turkish territory.

Is theater what people in desperate situations need? An EU-funded theater group is traveling around Greece on a sailboat - and has been well received among refugees on the island of Lesbos. (20.06.2016)