Tens of thousands of people joined a protest in Barcelona urging the Spanish government to increase its refugee intake. Only 1,100 migrants have been resettled under a plan to take in 17,000 people. 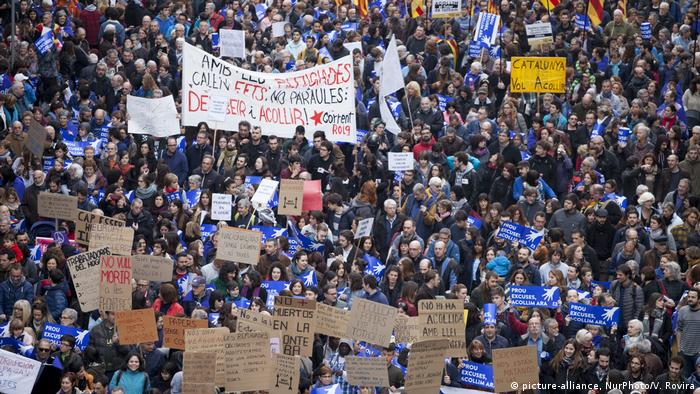 Protesters heeded a call by Ada Colau, the mayor of Spain's second city, who urged residents to "fill the streets" on Saturday to highlight the Madrid government's failure to accept its share of refugees.

Colau has put forward a plan to allow Barcelona, the capital of the wealthy northeastern region of Catalonia, to resettle migrants from Syria, Iraq, Afghanistan and Eritrea.

Local police said some 160,000 people joined the protest along the major Via Laietana avenue, which runs from the city center to the Mediterranean coast.

One protester, 62-year-old Jacint Comelles, said Spain had a duty to help those who have fled conflict in the Middle East and Africa.

"We demand this minimum amount of dignity - that at least this number of refugees [16,000] can come," he said. "In Catalonia, everything is ready to welcome them."

Spanish authorities said 11 guards in a territory in North Africa were injured when some 500 people forced their way through a border fence. The rush came as Morocco threatened it could let more migrants through. (17.02.2017)

A dawn rush by 300 migrants on Spain's barb-wired Africa enclave of Ceuta ended with two people drowned and 12 others badly hurt. The Red Cross said 185 individuals made it onto Spanish territory. (25.12.2015)

In September 2015, Spain's government pledged to bring 17,337 refugees in within two years under a European Union quota plan that would see migrants shared among EU member states.

Among those accepted would be 15,888 from camps in Italy and Greece and 1,449 from Turkey and Libya, an official said.

But to date, only 1,100 migrants have been resettled in Spain.

A group named Castra Nostra Casa Vostra (Our home is your home) organized Saturday's protest, which wrapped up at the Mediterranean coast, where more than 5,000 migrants died trying to reach Europe last year.

On Saturday, the Spanish frigate Canarias rescued another 112 migrants off the coast of Libya, the defense ministry said.