Tens of thousands of Poles have rallied across the country to protest the country's new right-wing government and its tightening grip on power. The central rally in Warsaw was interrupted early due to a bomb threat. 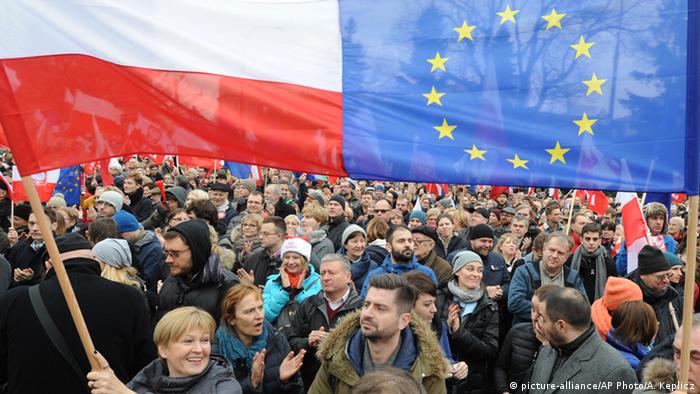 Politicians and artists, as well as former anti-communist dissidents, joined the protests held in around 20 Polish cities on Saturday.

Locals protested the government's bid to install five of its alleged supporters in the 15-member Constitutional Tribunal.

"The ruling party is going to destroy the Constitutional Tribunal," said blogger and activist Marcin Skubiszewski, protesting at the central rally in Warsaw.

"This situation is really dangerous. Poland can go from democracy to either illiberal democracy or dictatorship," he added.

Organizers were forced to halt the central protest after two hours, due to an anonymous bomb threat. The threat turned out to be a hoax.

Warsaw is also set to pass new legislation on Monday, which would require a two-thirds majority for a valid verdict of the country's top court. 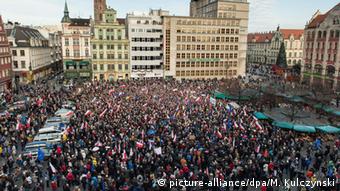 The judiciary is one of the last remaining checks on government's power, with the conservative Law and Justice party (PiS) already holding the presidential post and absolute majority in both houses of parliament.

The party is led by staunch conservative Jaroslaw Kaczynski, a former prime minister and the twin brother of the late president Lech Kaczynski.

The ex-prime minister recently described the government's critics as "the worse kind of Poles with betrayal written in their genes," and descendants of the Gestapo.

The Law and Justice party's approval ratings have slid to 27 percent, compared to 42 percent at the start of December, according to a TNS Institute poll published in the daily newspaper Gazeta Wyborcza.

Some 50,000 people also marched in Warsaw last Saturday, followed by a pro-government rally a day later.