This Town Ain't Big Enough for Two of Us

German traffic police booked a fake American cop they found driving down the autobahn -- possibly jealous because the public seemed to trust him more than them. 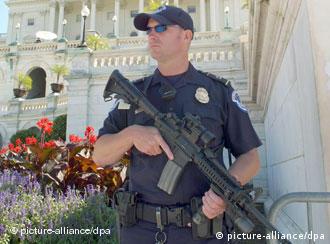 Would you ask this man for directions?

It was a scene straight out of the hit US TV show COPS: A Californian highway patrol car, cruising along nicely, the officer's arm comfortably propped out the window. Only it wasn't LA, it was the central German state of Hesse -- and local police were none too pleased to see their patch invaded. Especially by a fake.

The wannabe from Göttingen -- aka "T.J.Lazer" according to his badge -- was on his way to Bavaria to sell his genuine article 30-year-old patrol vehicle. When German police pulled him over, he told them he thought his outfit would impress the buyer. After all, who wouldn't buy a used car from a patrol officer?

Armed with a baton, handcuffs and a Smith & Wesson, he clearly cut a convincing figure. While being questioned by the German police at a motorway stop, he was asked for directions several times by passers-by -- who completely ignored the real officers.

They recovered from the snub in time to book the man for possessing a replica revolver without a license, having out-of-date registration plates -- and wearing a police uniform in public.

They steal from the rich and give to the poor. And just like Robin Hood and his men, a gang of Hamburg activists are proving difficult to catch despite the fact they dress as superheroes when they raid swanky stores. (08.05.2006)

The Business of Carnival

Germany's Rhineland is on the cusp of its annual carnival climax, and it is not only the local jesters who are dancing a jig of joy. Carnival has, over the years, come to mean big business and big bucks for Germany. (26.02.2006)

In Germany, it used to be that you knew you'd made it in life when you bought your first Mercedes. But as affordable foreign cars offer consumers an attractive alternative, how long will this still be the case? (05.07.2005)