The Business of Carnival

Germany's Rhineland is on the cusp of its annual carnival climax, and it is not only the local jesters who are dancing a jig of joy. Carnival has, over the years, come to mean big business and big bucks for Germany. 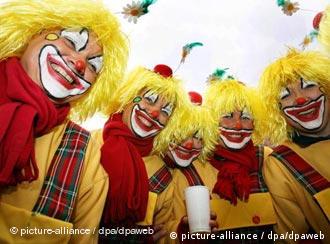 Will they help to boost Germany's economy?

One of the greatest money spinners at this time of year is fancy dress. From funny costumes to crazy wigs -- shops that stock it, flog it. En masse. Spread out over 3000 square meters (32,300 square feet), Germany's biggest carnival store, "Karnevalswierts" is like a scene from the post-Christmas sales. No sign of consumer apath here.

Frank Schröder, who manages the store, said he can't complain.

"Maybe tough times make people all the more determined to celebrate," he said. "Perhaps people work on the basis that even if they can't afford a holiday, they will aim to have a good time at carnival." 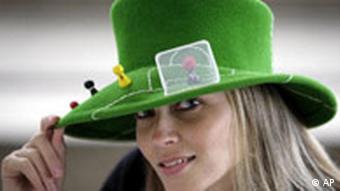 Probably one of the tamer soccer-themed Carnival hats

Preparations for the Rhineland's festive season get underway before the official start on Nov. 11. By the time Christmas rolls around, the Cologne carnival business is kitting out as many as 10,000 customers daily.

Soccer-themed costumes are a big seller this year as Germany is hosting the World Cup in the summer.

"We have soccer overalls, scarves, caps and lots of other things," Schröder said, adding that he believes these kinds of outfits will remain popular way beyond Ash Wednesday, the official end of carnival.

But costumes are only one part of the seasonal industry. Restaurants and bars also do good business, as do those who make the candy -- tons of which is thrown through the air as part of the Rose Monday processions. 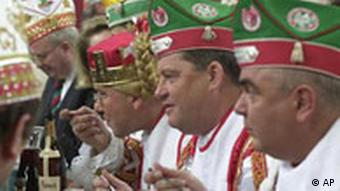 Even crazy folks must eat

"The annual revenue amounts to between 4 and 5 million euros ($4.7 billion to $5.9 billion)," said Volker Wagner, the president of the German Carnival Association, adding that in Cologne alone, carnival brings in revenues of 350 million euros.

About 3,000 people in the city have also found work because of the "fifth" season. Wagner said that 30 companies in Germany produce carnival medals year round.

"Gastronomy, cab companies and others -- they may not live off carnival, but it certainly contributes to business as a lot of extra people are employed during that time," Wagner said.

But not everyone stands to benefit from carnival: Fewer and fewer people attend the big galas put on by carnival associations, opting to watch the festivities on television instead. But Wagner partly blamed gala organizers, who charge outrageous sums for drinks, such as 9.80 euros for a bottle of mineral water.

Carnival in the Rhineland culminates this week, but Germany's economic downturn has created problems for the region's carnival associations. With reduced government support and donations, many face an existential crisis. (Feb. 21, 2004)

Carnival kicks off across Germany this week. Traditionally, no topic is sacred during this time. But the ongoing controversy over caricatures of the Prophet Mohammed will stay out of the festivities. (Feb. 21, 2006)