'This is not how I wanted to arrive in Europe'

A new documentary tells the story of Cameroonian migrant Paul and his perilous journey to Germany. While accompanying his protagonist, director Jakob Preuss was tempted to step outside his role and help Paul make his way 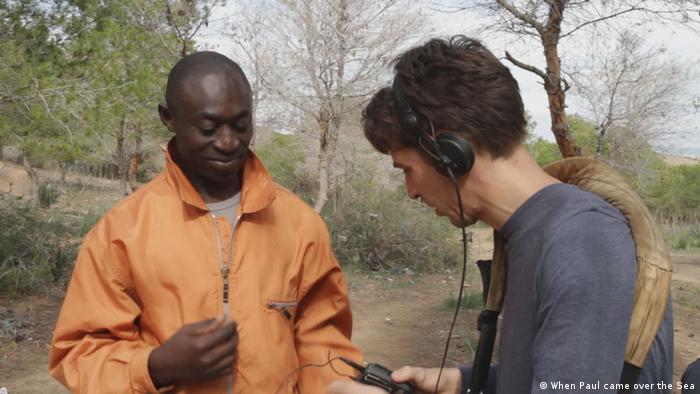 African migrants are stuck on top a six-meter high razorwire fence that separates the small enclave Melilla from Morocco. The fence symbolizes the fortress of Europe. A golf course stretches out peacefully in front of them, two golfers are working on their swing. A photo of this scene went viral in 2014. And it is with this sequence that the documentary film “When Paul came over the sea” also starts. Not much has changed since then, as director Jakob Preuss is implying. Even though his protagonist Paul Nkamani has reached Germany today, he still lives in constant fear that he might get deported back to his home country.

“Every newcomer wants to present his family and friends back home with nice images,”Paul says when asked about his current situation. “That’s what people before me have done. They told us that this is paradise. But I can only talk about my true experiences. And it is hard, very hard.”

Paul and filmmaker Jakob Preuss are currently touring across Germany to promote the film. They are giving interviews at schools and universities. On April 19, the documentary is up for competition at the “Achtung Berlin” film festival. 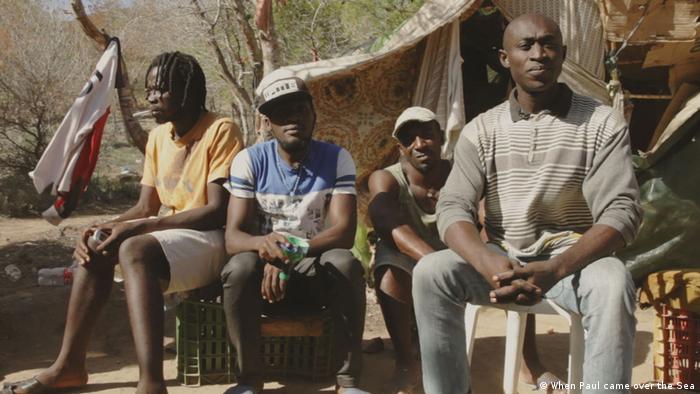 Paul (right) spent three months in the forest near Melilla, waiting for a chance to cross into Europe

The setting has changed completely since their first encounter. Paul and Jakob met in a wild camp in the heart of the Moroccan forest close to Melilla. Paul was waiting along with other migrants for a chance to climb the fence and cross the land border to Spain or travel across the Mediterranean Sea. 41-year old Jakob Preuss was there because originally he wanted to shoot a documentary about the European border agency Frontex.

Jakob met migrants from Sub-Saharan Africa in Rabat and Casablanca who told him about the encampment in the forest. When he went there and started filming, everyone was suspicious, Paul recalls. “We did not know why he made recordings. But then we asked questions and he explained why he was filming and I found that this was all in our interest.”

Paul then confided in Jakob and decided to tell his story in front of the camera. Four years ago, he left Cameroon without informing anyone but his mother. He wanted to flee misery and unemployment. He took the “classic route” via Nigeria, despite the threat of Boko Haram. He then crossed Niger and Algeria to reach the Moroccan woods near Melilla. It took him eight months, and had no money left. “I did not have any resources, and nobody behind me to support me unlike others in the camp who had contacts in Europe.” That’s why he returned to Algeria to work in masonry. Saving enough money took him three years. 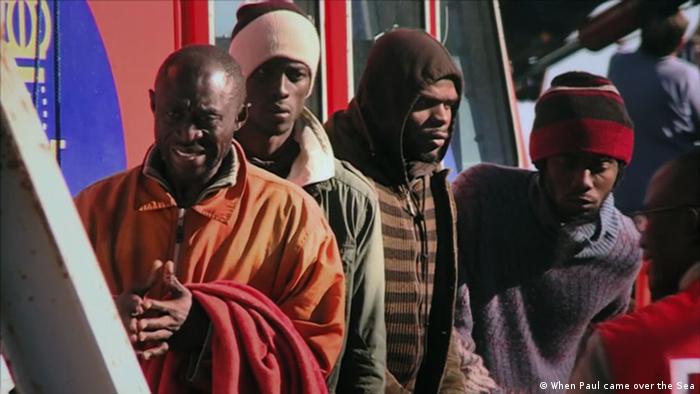 Paul disembarks in Tarifa in Spain

When they met, Paul had already been travelling for four years. In the camp, Paul helped Jakob to make contact with the other migrants. They were there three months until one morning, Paul was missing. He had embarked on a boat to make the crossing. As news of a boat drowning circulates, Jakob immediately heads to Spain in hope that Paul would be among the survivors. And then the miracle happens: Jakob sees Paul on the news showing survivors getting off a boat. Is this much drama necessary for us to finally wake up and take notice of refugee tragedies? “I have not found an answer to this question until this day”, Jakob says.  “I sometimes feel that it needs this Hollywood drama of people drowning in the sea to get people to help. I don’t know how people would react if migrants could just board a plane and come the regular way.” In Germany: Reality and expectations clashing

Looking back in regret

From this moment on, the film takes a new turn. Paul is stranded in Spain and wants to go to Europe. Jakob could help him – he has to decide whether he will stay neutral as the man behind the camera asking questions. “This is a very important dimension of the movie, even though it was not planned. I hope it inspires others to think about it as well. We are often the observers, and we should ask ourselves how we can get involved, if we want to get involved and how far we are willing to go.”

Paul from Cameroon knows to what lengths he has gone to reach Germany. It is with a heavy heart that he sees the images of his own trip on the big screen today. “This is not how I wanted to arrive in Europe. One should not have to take so many risks. I made it, thank God, and I am still alive. Many others are not that lucky. It should not have been like this.”

InfoMigrants does not bear responsibility for the content of external websites

The African Network of Germany (TANG) has launched a project about the dangers of illegal migration to Europe. It's currently being presented to young people in Cameroon. (12.04.2017)