With Cardinal Karl Lehmann resigning as head of the German Bishops' Conference, are the winds of change blowing in the country's Catholic Church? Catholic theologian Uta Ranke-Heinemann doesn't seem to think so. 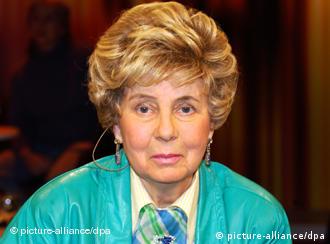 Uta Ranke-Heinemann was ex-communicated in 1987

Uta Ranke-Heinemann was the first woman in the world to hold a chair of Catholic theology, and the first woman in the world to lose it. Born in 1927, the eldest daughter of former President Gustav Heinemann (1969 - 74) converted to Catholicism in 1953 and studied in Munich alongside Joseph Ratzinger, becoming a professor in 1970. In 1985 she began teaching at the University of Essen (now known as the Duisburg-Essen University) but lost her position and was excommunicated in 1987 after she voiced doubts about the Virgin Birth. She subsequently held a religious history chair at the university that was not controlled by the church. In 1999 she was presidential candidate for the PDS (Party of Democratic Socialism), but defeated by her nephew by marriage, Johannes Rau. These days, she is a humanitarian activist and pacifist and writes books on Catholicism, including the international bestsellers "Eunuchs for the Kingdom of Heaven" and "Putting Away Childish Things." DW-WORLD.DE talked to her about where Germany's Catholic Church is headed after Cardinal Karl Lehmann announced this week that he would be stepping down as head of the German Bishops' Conference.

DW-WORLD.DE: Cardinal Karl Lehmann is often referred to as the liberal voice of German Catholicism. Is this a description you'd agree with?

Uta Ranke-Heinemann: Cardinal Lehmann is a tragic figure. He and I were both students of Karl Rahner, the most influential theologian of the 20th century. We were friends. He took me home on occasion -- only as far as the front door, of course, but nonetheless -- and we agreed on everything. These days, however, Karl Rahner is more or less dismissed by the bishops as a heretic. You can't find his books anywhere. But in 1984, Lehmann wrote an introduction to an anniversary publication marking Rahners's 80th birthday, in which he explicitly praised him and other theologians as forward-thinking and progressive on questions such as the Virgin Birth, brothers and sisters of Jesus and the matter of Joseph being the biological father of Jesus, the son of God. In 1987 he became head of the Bishops' Conference, and this was the year I lost my professorship because I quoted Rahner's views on the Virgin Birth. When I turned to Lehmann for help, he failed to respond. He clearly has one opinion for theology professors and another for the flock. So while I consider Lehmann likeable, I believe that he is a master of the double standard. On a number of key issues, he has one truth for the pope and the simple-minded, and another for theology professors such as Karl Rahner. Cardinal Karl Lehmann - a master of the double standard?

The question of the Virgin Birth, use of condoms, abortion from the moment of conception. Personally I am against abortion, but not from the first moment of conception. Lehmann on the other hand called an embryo that's just seconds old an individual, i.e. something indivisible, which is scientific nonsense. Other issues include the practice of exorcism under John Paul II and his successor Benedict XVI, which Lehmann happily goes along with. "Church exorcisms are necessary because otherwise, exorcisms will be performed outside the church and the situation will spiral out of control," he said on Spiegel TV in January 1996. Now and then, Lehmann tried in vain to find compromises with Rome, which is why he is referred to as a liberal. But under the current pope and his predecessor, he allowed the gap between the shepherd and his flock to become ever wider.

Lehmann has said he'd like to see generational change in the Catholic Church here in Germany. Do you think this will happen?

Nonsense -- they don't want generational change at all. All that matters is that they are all clones of the pope. Pope John Paul II only ever appointed clones and Benedict does the same. All the bishops are made in his image. Even the younger ones are no more modern or liberal. Characters such as Joachim Meisner [Editor's note: the archbishop of Cologne] are all hand-picked. They all go along with exorcism at christening for infants and "great" exorcism for adults (in keeping with John Paul II's World Catechism 1992, no. 1237, 1243, 1673), and all they're interested in is the abortion issue. As part of the Church's worship of the Virgin Mary, it believes in the ensoulment of human life at the first moment. Prior to 1869, it adhered to the principle of successive ensoulment and required excommunication for abortions only after 80 days. Rahner returned to the principle of successive ensoulment without attaching a particular time-frame to it. Today, the Church pulls the wool over people's eyes, and in essence it comes down to double standards and dishonesty. And that's my main reproach against Lehmann.

Are there any liberal elements in the Catholic Church?

Not among the bishops. Pope John Paul II put paid to the old guard -- either their authority to teach was rescinded -- such as Hans Küng [Editors' note: Küng rejected the doctrine of papal infallibility and was stripped of his license to teach as a Roman Catholic theologian] -- or they died, like Karl Rahner, and were replaced by new ones who were closely vetted. One reason why the percentage of homosexuals in the Vatican is so high is because all that matters is that none of the bishops have a record of relationships with women. They must oppose birth control -- and of course, women priests are unacceptable. Christianity has become reduced to a credo of celibacy.

Does it really matter who heads the German Bishops Conference, given that the final authority is always with the pope?

No! That's the point. Lehmann was seen as liberal because he would complain a little, he would take a humanitarian stance now and then and bleat a little. He was never a fanatical hardliner like Meisner. But ultimately he always caved in. He kept his mouth shut. All that matters is the pope. The bishops are utterly incapacitated.

Which reforms do you think the Catholic Church needs most?

The pope should not be infallible. But I'm pessimistic. This will never happen. Nothing will change. Anyone who doubts the anti-abortion and anti-condom stance, for example, will simply never be allowed to become a bishop.

Why is the Catholic Church incapable of changing? 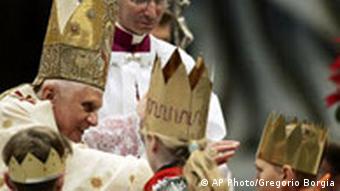 As an entity, the Catholic Church has taken 2000 years to achieve a theocratic concentration of power. The pope doesn't just want to rule the Vatican, he wants to rule the world. He wants God acknowledged in state constitutions, but of course only his God -- after all, a donkey sees God as a donkey, man sees God as man. But people seem to be able to accept this ridiculous fairytale figure of a pope. So long as one doesn't ask too many questions, it's all very easy to believe.

The host of a bishops' conference in southern Germany has taken one of his peers to task for reassigning a priest with a history of sexual abuse to a new parish. He also called for more openness on this sensitive issue. (25.09.2007)

A German bishop has sharply criticized government plans to improve childcare facilities, saying they reduce women to "birthing machines" who quickly have to return to work. The remarks even have conservatives up in arms. (23.02.2007)

Do you agree with Uta Ranke-Heinemann's views? Send us an e-mail, and don't forget to include your name and country of residence.