Head of Catholic Church in Germany to Step Down | Germany | News and in-depth reporting from Berlin and beyond | DW | 15.01.2008

Cardinal Karl Lehmann, the head of Germany's Catholic Church, has announced that he will vacate his post on Feb. 18. The sometimes controversial, but respected bishop is known to have had health problems last year. 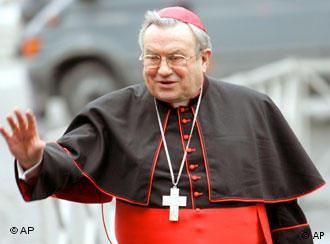 German Cardinal Karl Lehmann is a close associate of the pope

Cardinal Karl Lehmann said he would resign from his post as German Catholic Church leader next month, after having led the country's bishops for over 20 years.

The 71-year-old has apparently been suffering from health problems, having been admitted to the hospital at the end of last year after complaining about his heart.

He was unable to lead traditional Christmas and New Year's services, but did return to celebrate the Epiphany on Jan. 6 in Mainz's cathedral, where he has been bishop since 1983.

On Tuesday, Jan. 15, in his resignation letter, he wrote that now was the appropriate time to step down.

"The recent appointments of new bishops has shown that it's time for a changing of the guard, it's time that a new generation takes over," Lehmann wrote.

Aachen's Bishop Heinrich Mussinghoff, who is also deputy chairman of the German Bishops' Conference, thanked Lehmann for his "unflagging service" for the Catholic Church, and paid tribute to him as "an excellent and reliable representative of the Church and its message."

Hans Joachim Meyer, of the Central Committee of German Catholics, said of Lehmann on Tuesday: "He has set standards through his actions, which will not be forgotten."

Considered to be less conservative than colleagues 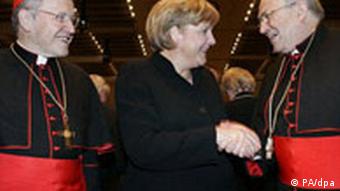 Considered to be a relatively liberal Catholic theologian, the cardinal is a close associate of Pope Benedict XVI, who is also German. Lehmann became deputy head of German bishops in 1985 and was appointed chairman in 1987. He has held that post longer than any other bishop.

He is viewed as a moral authority in Germany, and became a symbol for the Catholic Church in the country. But he has not always appealed to everyone, something with which he has learned to come to terms.

In an interview with public broadcaster Südwestrundfunk (SWR), he said adapting to situations is important.

"Since I have been chairman of the Catholic Bishops' Conference in Germany, I have learned that I must remain open during every type of discussion and that I must not alienate anyone," he said. "So rather than defending myself in certain situations in which it might have been called for, I just let it go."

Indeed, some of his more conservative colleagues have been more than a little irked by his refusal to toe the traditional Catholic line. He tried, for instance, to be a mediator when Catholic university professors protested against the Vatican in 1989.

Mediation has often been his role, also in inter-religious dialogue.

Nikolaus Schneider, a leader within the Protestant Church, said about Lehmann's resignation: "He was and is a blessing, and not only for the Roman-Catholic Church, but for all Christians and for the entire country." 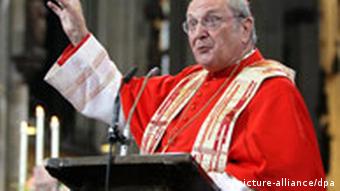 Kurt Beck, the leader of Germany's Social Democratic Party and premier of the state of Rhineland-Palatinate, where Mainz is located, said: "His influence went far beyond the religious circles, and was felt within the public at large."

Beck noted Lehmann's ability as a brilliant theologian to reconcile situations through his humor and humane, down-to-earth approach.

Charlotte Knobloch, president of the Central Council of Jews in Germany regretted Lehmann's resignation, commenting that the bishop has been a reliable contact for Jewish representatives.

Nonetheless, Lehmann upset many Muslims last year, when he spoke out against Islam enjoying equal status to Christianity in Europe.

Cardinal Lehmann said he would like to remain in the service of the Archdiocese of Mainz for several more years and would still like to contribute his knowledge in the German Bishops' Conference in a non-leader role.

He is still to lead the spring plenary meeting of bishops in Würzburg in mid-February before stepping down.

Germany's highest-ranking cardinal has warned against indifference and uncritical tolerance which he says could lead to Islam enjoying equal standing with Christianity in the country. (22.06.2007)

Germany's Jewish community has criticized Catholic bishops for comparing Israel's separation barrier in the West Bank to the Nazi confinement of Jews in ghettoes. But the bishops say they were expressing their shock. (07.03.2007)

What do you think of Lehmann's impending resignation? Please include your name and country in your reply.