Theolgian Warns of Bleak Future for Catholic Church Under Pope Benedict | Germany| News and in-depth reporting from Berlin and beyond | DW | 28.02.2009

Leading progressive theologian Hans Kueng has said the Catholic Church increasingly threatenes to deteriorate into a sect under Pope Benedict XVI, prompting protests from the Vatican. 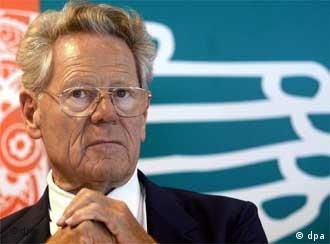 In an interview with German news agency DPA on Saturday, Feb 28, Hans Kueng defended earlier remarks to a French newspaper in which he said that Pope Benedict had lost a great deal of credibility and that the Catholic Church was floundering under him.

An emeritus professor of ecumenical theology at the University of Tuebingen in southern Germany, Kueng said he was "very sad" over the direction that the current church leadership was taking.

Kueng, whose authority to teach Catholic theology was rescinded by the Vatican over his criticism of papal authority, said he was still optimistic after meeting Pope Benedict XVI four years ago.

"I was hoping that he Pope Benedict would show himself as reforming, ecumenical and open for the future. But this hope has been bitterly disappointed," Swiss-born Kueng said.

Benedict XVI, formerly cardinal Josef Ratzinger, strained relations with the Protestant churches because of his lack of willingness to engage in ecumenical dialogue. Neither did the pope's dialogue with Islam amount to more than lip service, Kueng said. 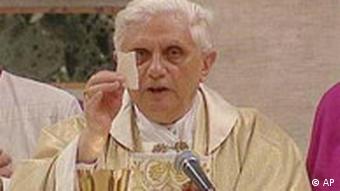 Furthermore, the German-born pope severely damaged relations with members of the Jewish faith by revoking the excommunication of Richard Williamson, a Holocaust-denying bishop of an arch-conservative Catholic group.

"Pope Benedict XVI seriously angered many faithful Catholics and suffered a severe loss of his credibility. This is sad," Kueng said.

The pope should state that the revoking Williamson's excommunication without conditions has not been justified, Kueng demanded.

Kueng's remarks have prompted fierce criticism by the Vatican.

Cardinal Angelo Sodano, dean of the College of Cardinals at the Vatican rejected Kueng's criticism, calling it "bitter" and "hurtful" and said it didn't promote the unity of the Church.

The Vatican said on Friday it was not satisfied by the apology issued by Holocaust-denying bishop Richard Williamson and called on him to "unequivocally and publicly" withdraw his comments. (27.02.2009)

The Catholic church sees the faithful leaving the church in droves after the controversial lifting of the excommunication of a group of rightist bishops, a German Vatican expert said Saturday. (07.02.2009)