Pope′s Call for Bishop to Retract Holocaust Claim Welcomed | Germany| News and in-depth reporting from Berlin and beyond | DW | 06.02.2009

The Yad Vashem Holocaust memorial in Jerusalem welcomed Thursday the pope's decision to demand that Bishop Richard Williamson publicly and unambiguously recant his stance regarding the Holocaust. 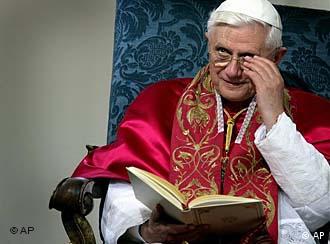 Yad Vashem Chairman Avner Shalev said the pope's decision sends an important message that there was no place within the church for those who deny that the Nazis killed between 5 million and 6 million European Jews during World War II.

"When the highest moral authority of the church states that Holocaust denial is unacceptable, that is a vital message for the entire world," he said.

The pope's decision last month to re-admit the British-born Williamson, who has denied the Holocaust, into the church caused an uproar, especially in the pontiff's native Germany.

Prompted by comments from German Chancellor Angela Merkel, the Vatican issued a statement Wednesday calling for the ultra- conservative bishop to distance himself "clearly and publicly" from remarks he made denying the Holocaust.

Merkel described Thursday the latest move by the Vatican as an "important and good signal."

Speaking after a meeting with international organizations in Berlin, the chancellor said, "This makes it clear that a denial of the Holocaust can never be left to stand without consequences."

Catholic theologian Hans Kueng went further Thursday, demanding that the pope reverse the re-admission to the church of Williamson and three other ultra-traditionalist bishops, all members of the Society of Saint Pius X (SSPX). 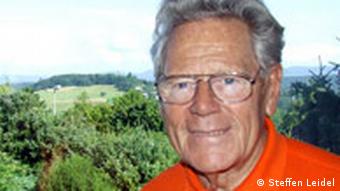 Kueng demanded a full reversal of the pope's decision

"That would surely be uncomfortable for the pope," Kueng told the DPA news agency. However, he added, "The pope shouldn't think he can just wait for this to go away. Then there's a risk that this decision will always taint him."

In Kueng's opinion, Pope Benedict's belated call for Williamson to retract his Holocaust denial is useless. "By lifting the excommunication without precondition, the pope has become prisoner of the Pius Brotherhood," the theologian said.

He added that the Vatican had no further means of extracting any form of statement from the traditionalist bishops.

Chancellor gets flak for comments

Earlier in the day, Merkel had faced criticism from within her Christian Democratic Union (CDU) party over her call for Pope Benedict to take a clearer stand on Williamson's remarks.

The Speaker of parliament, Norbert Lammert, told the daily Hamburger Abendblatt that "much of what is being imputed to the pope is almost malicious, and certainly not fair." 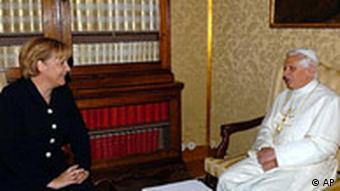 Merkel's involvement has angered the Vatican

The Vatican has reportedly also expressed anger at Merkel's involvement in what was originally an attempt by the pope to heal a rift within the Catholic Church.

Georg Brunnhuber, of the CDU, spoke in person to the pope Wednesday.

"People in the Vatican are downright appalled at the discussion in Germany," he told daily Financial Times Deutschland.

This has given the impression, he added, "that all anti-Catholic resentments slumbering in Germany are now rising to the surface."

The Catholic archbishop of Munich, Reinhard Marx, speaking to the daily Sueddeutsche Zeitung, also expressed surprise at Merkel's criticism of the pope.

"The pope took a clear position against any form of Holocaust denial," Marx told the paper. To suggest that the pope would tolerate anti-Semitism, he said, "is outrageous."

Williamson, who is based in Argentina, received backing Thursday from the German wing of SSPX.

Asked if someone who denied the destruction of Jews by the Nazis could still be a brother, SSPX superior Father Franz Schmidberger said, "as long as he recognizes the Catholic dogmas. Yes, of course." 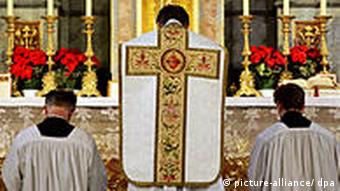 The SSPX dissociated itself from the Holocaust denier

Speaking in an interview with German SWR television, Schmidberger dissociated himself with Williamson's claim that Jews were not killed in gas chambers.

However he said this was to be considered as a separate matter from the pope's readmission to the church of the four SSPX bishops.

Schmidberger also spoke against a dialogue between Christians and Jews, saying this was not a road to salvation. "Christ deliberately sent his apostles into the world, in order to convert all the world, including the Jews, to him," he said.

Kueng is of the opinion that anti-Semitism is widespread throughout the SSPX brotherhood. "They consider the Jews to be God- murderers and are averse to any dialogue," Kueng said.

The SSPX brotherhood has its roots in the decision, by Archbishop Marcel Lefebvre, to reject the liberalization of the Catholic church during the Vatican Council of 1962-65.

When Lefebvre disobeyed orders by Pope John Paul II and consecrated Williamson and three other men as bishops, they were all excommunicated from the church.

While the public dispute over Williamson's remarks rumbled on, it was not clear whether Pope Benedict would achieve his desired resolution of the rift between the SSPX brotherhood and the Catholic church.

Opinion: The Pope is Trapped

The decision by Pope Benedict XVI to allow a Holocaust denier back into the Catholic Church was greeted with outrage, especially in Germany. DW's Felix Steiner takes a critical look at the controversy. (05.02.2009)

Kueng: Rome Should Not Open Arms to Ultra-Conservative Bishops

Catholic theologian and contemporary of Pope Benedict XVI told Deutsche Welle the Vatican should not accept ultra-conservatives who deny freedom of conscience and religion back into the Catholic flock. (04.02.2009)