The world in pictures: How photography revolutionized the press

Barely a century ago, the invention of photojournalism turned the press landscape upside down. A new exhibition at Berlin's German Historical Museum reimagines a photographic revolution.

A new exhibition at Berlin's German Historical Museum titled "The Invention of Press Photography: From the Ullstein Collection 1894-1945," shows how photography first appeared in newspapers and magazines at the turn of the 20th century - and rapidly boosted circulation.

Featuring defining examples of an emerging art form that are held in the image archives of the Ullstein publishing house, the exhibition particularly draws on the weekly news magazine, "Berliner Illustrirte Zeitung," published by Ullstein from 1892 to 1945.

With a circulation of nearly two million copies at one time, it was Germany's most successful magazine. This was largely due to the images it displayed from renowned press photographers and picture agencies, photos that drew in readers from across the social spectrum. 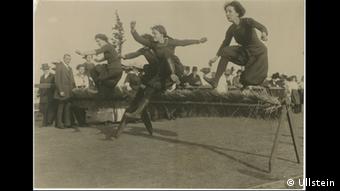 More generally, the exhibition shows how press photography represented a historical turning point in the development of the press in Germany and beyond - and was also front and center of documenting the coming turbulent times.

"Photography changed the press landscape and thus our perception of reality," wrote the German Historical Museum of the exhibition.

The "Berliner Illustrirte Zeitung," in particular, "stood for the birth of a new medium, the illustrated magazine, and the way it dealt with photography, which influenced people's viewing habits and engaged the visual longings of its readers."

Featuring works by noted photographers such as Georg and Otto Haeckel, Philipp Kester, Martin Munkacsi, Yva, Max Ehlert and Regina Relang, "The Invention of Press Photography" runs from June 23 through October 31 in Berlin.

Associated Press photographer Burhan Ozbilici has garnered this year's World Press Photo of the Year, one of the most prestigious accolades for photo journalism. (13.02.2017)

US photographer Stephanie Sinclair gives young, vulnerable women a voice. She tells DW what motivates her to risk her life and why the US bears a special responsibility when it comes to defending women's rights. (08.06.2017)

The world-renowned Magnum photographer has renounced the responsibilities of a photojournalist after heavily editing several of his images. But his use of Photoshop has breached photojournalism's ethics, say colleagues. (31.05.2016)