The world-renowned Magnum photographer has renounced the responsibilities of a photojournalist after heavily editing several of his images. But his use of Photoshop has breached photojournalism's ethics, say colleagues. 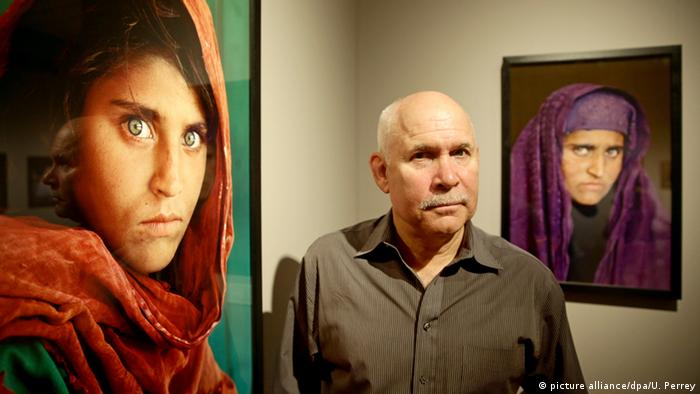 Steve McCurry, a Magnum photographer and contributor to National Geographic magazine, admitted on Monday to using the image editing software Photoshop in a selection of his images, crossing what many consider the ethical red line of photojournalism.

However, the world-renowned American photographer, known for the National Geographic magazine front-cover image titled "Afghan Girl," told Time Magazine that despite "years of covering conflict zones," he now considers himself a "visual storyteller."

'Sometimes I just have to cry while doing my work'

Award-winning war photographer Adriane Ohanesian documents the fate of people in conflicts neglected in the media. She told DW what drives her to face death.

"Even though I felt that I could do what I wanted to my own pictures in an aesthetic and compositional sense, I now understand how confusing it must be for people who think I'm still a photojournalist," McCurry said.

"Going forward, I am committed to only using the program in a minimal way, even for my own work taken on personal trips," he added.

American photography blog PetaPixel broke the story earlier this month after Italian photographer Paolo Viglione posted a botched image from McCurry's trip to Cuba he discovered on the Magnum photographer's blog. The photo in question showed remnants of a traffic sign sticking out of a passerby's leg.

The post prompted a backlash from social media users, who questioned the integrity of the photojournalist's works. McCurry's personal blog, which contained an archive of his images dating back several years, has since been deleted in its entirety.

Late April, Gianmarco Maraviglia, founder and director of Echo Photojournalism agency, posted on Facebook two of McCurry's images, an unprocessed one and the same image with two people missing from the scene.

"What he did in Photoshop is totally outside the limit of power in the profession. In my opinion, one cannot move any pixel when it comes to journalistic photographs," Maraviglia told DW.

Sean D. Elliot, ethics committee chairman of the National Press Photographer's Association (NPPA), said in a statement that McCurry "bears the responsibility to uphold the ethical standards of his peers and the public, who see him as a photojournalist."

"Any alteration of the journalistic truth of his images, any manipulation of the facts, regardless of how relevant he or others might feel they are to the deeper 'truth,' constitutes an ethical lapse," said Elliot.

Pictures must always tell the truth'?

Although using an image editing tool such as Photoshop is generally accepted to process RAW camera files and lightly tweak colors and lighting, most photography agencies ban removing or inserting objects in the image.

"AP pictures must always tell the truth. We do not alter or digitally manipulate the content of a photograph in any way," states The Associated Press' code of ethics for photojournalists.

"No element should be digitally added to or subtracted from any photograph. The faces or identities of individuals must not be obscured by Photoshop or any other editing tool," the code adds.

Meanwhile, Reuters news agency last year emailed its photographers informing them of its decision to ban the use of RAW files, stating that their photographers should only capture JPEG files, which do not allow the same flexibility in processing visual information as the former format.

"While we aim for photography of the highest aesthetic quality, our goal is not to artistically interpret the news," a Reuters spokesperson told American photography website PetaPixel.

Meanwhile, Echo Photojournalism agency's Maraviglia told DW that although McCurry is a role model for many aspiring photojournalists, his actions in digitally removing objects is "totally wrong."

"I respected him and his work in the past. But the rules have to be the same for everybody," Maraviglia told DW.

"I know a lot of young photojournalists struggling with this - to be completely honest with themselves and the story they are trying to tell," he added.