The women of Kyiv′s Independence Square | Europe | News and current affairs from around the continent | DW | 26.01.2014

The women of Kyiv's Independence Square

They hand out food to the demonstrators, clear away snow and ice from the streets and assist the wounded. Hundreds of women are getting involved in the opposition protests in Ukraine's capital, Kyiv. 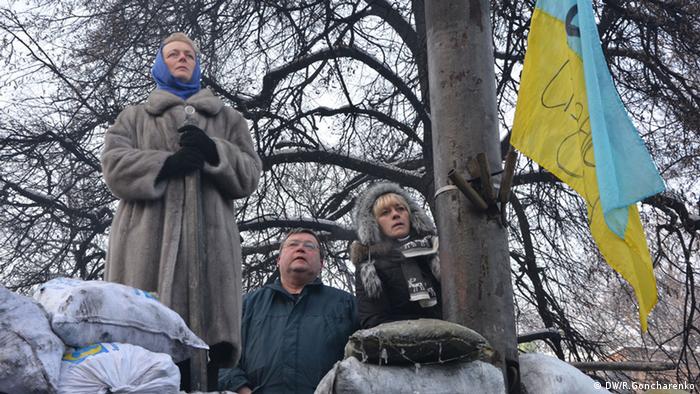 The snow along Kyiv's Hrushevskoho Street has turned black - like the faces of the people standing between the barricades here, darkened by smoke. For days, opposition demonstrators have been burning car tires to prevent the police from getting too close.

A section of the street around 200 meters (656 feet) long is currently the most dangerous point in Kyiv's ongoing skirmishes between demonstrators and the government. Some have died from the police's bullets, and hundreds have been injured. Radical opponents of the government have also used it as a position for throwing Molotov cocktails at police officers, who have responded with stun grenades and rubber bullets.

Hundreds - perhaps thousands - of Ukrainian women are also part of the protests in Kyiv. Neither the icy temperatures below minus 10 degrees Celsius, nor the explosions and shots fired have deterred them. 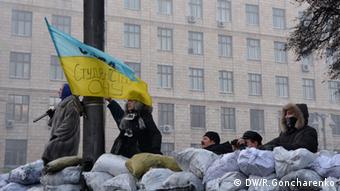 Women are discouraged from entering the most dangerous protest zones

Unlike the men, who are generally wearing helmets and carrying clubs, many of the women can be seen moving through the barricades without protection.

A teacher, an economist

Two women carry a large plastic basket with sandwiches between the opposition's barricades. "Bread rolls with bacon," they call out.

One of them, Halyna (Ed. Note: All names have been changed.), is a teacher in Kyiv in her early 50s. Her companion, Natalia, is in her late 30s and works as a finance director at a local company.

The two women got to know each other at Independence Square, the epicenter of the country's protests. They are both volunteers and wear masks so as to avoid recognition. A court has made it illegal to protest here, and new laws on extremism also raise the threat of imprisonment for oppositional demonstrators.

"We came here so that our children can live in a peaceful European state," said Halyna, the mother of two grown sons. Halyna is on vacation right now and comes to Hrushevskoho Street for hours every day. "We don't go over to the areas where shots are being fired. Women aren't allowed in there," she says.

When the situation grows precarious, men block women from the entrance to the first rows of the barricades. 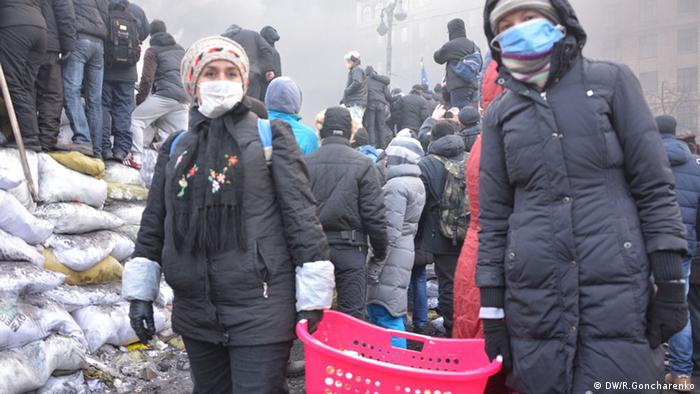 Halyna and Natalia hand out sandwiches to opposition members

Natalia says she has come in order to show solidarity with the protesters and to voice her opposition to President Viktor Yanukovych. "We're doing what we can - preparing sandwiches and bringing them to the demonstrators," says Natalia.

Both women's husbands know they are here. Natalia says she's not afraid of the shots and explosions around her and makes frequent trips on the weekend and after work.

"If we're afraid now, we'll be afraid our entire lives," she says.

Immediately afterward, a member of the crowd yells, "Watch out! Snipers!", as everyone looks up to the top of a building. Boos can be heard. But Halyna and Natalia seem untroubled and continue on.

A few meters further, Marina is helping to clear ice from the street. She is 35 and the mother of two children, aged nine and two.

"I'm here because of my kids," she says. "I would like for them to live in a democratic country and not in a dictatorship."

Marina is a housewife but also works in a children's store. "I come with my husband here every day, and we also bring our children." 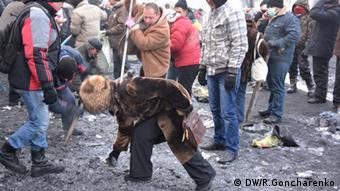 Blackened ice poses a hazard to those protesting in Kyiv

That's been true since the beginning of the protests in late November 2013, she adds. Tens of thousands have demonstrated in Kyiv against the president's decision to forge closer ties with Russia at the expense of a deal with the EU.

Marina says she is especially outraged at the victims who have died at the barricades, but she stresses she is not afraid, saying, "To simply sit at home isn't possible for me."

Oxana is standing at the edge of the street, hardly 50 meters from the blazing tires. "Please no photographs," she says. "Otherwise, my mother would recognize me, and she cannot find out that I'm here."

She is in her late 20s, a graphic designer in Kyiv with a five-year-old daughter. "I came here out of desperation. I cannot imagine living in a country in which such things happen as they are now in Ukraine."

Oxana comes every day after work and on weekends to Independence Square and to Hrushevskoho Street. Sometimes she brings along borscht, a traditional Ukrainian soup made with cabbage and beetroot.

Once she came at night, which led to a fight with her husband. "He didn't talk to me and said I was crazy," she explains with a smile.

The protests were initially caused when the Ukrainian president suddenly set his sights on closer ties with Russia instead of Europe. So far, the EU has kept on the sidelines of the conflict. But that could change soon. (25.01.2014)

Klitschko: Situation 'could spin out of control'

Vitali Klitschko, one of the key leaders of the Ukrainian opposition movement, tells DW that violence may continue to escalate in Kyiv. He says it's up to the president to take action to end the conflict peacefully. (25.01.2014)

Ukrainians in the US: 'Please help us!'

The US government and media are concerned about the mass protests in Kyiv. Ever since the violence escalated there, the Ukrainian community in the US makes itself heard. It wants the West to help. (25.01.2014)

The Kyiv native seemed headed for a bright future that he wanted to devote to his country — like many young people from his generation. He was killed fighting Russian troops on the eastern front line on June 9, aged 24.