Lederhosen and dirndls are rare, but everything else Oktoberfest is found in Taybeh, near Ramallah, in the West Bank. The German festival, celebrated here with home-brewed beer, is a little protest against Israel. 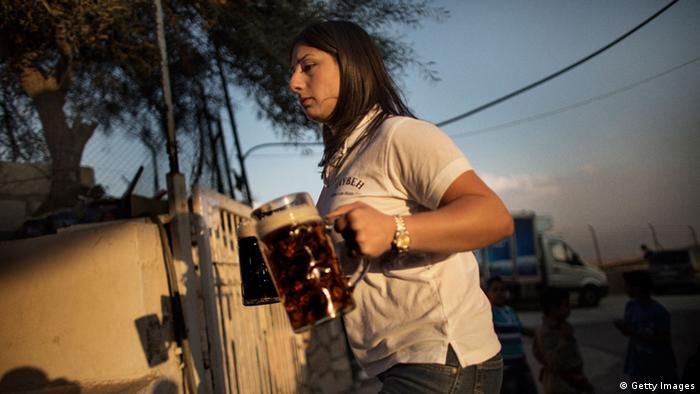 In the unlikely place of Palestinian West Bank, the Schuhplattler dance by the Bavarian brass band dressed in traditional Lederhosen appears rather exotic.

Those singing along to the song "Ein Prosit auf die Gemütlichkeit" ("A toast to coziness") also stumble across the words at times. But that doesn't put a damper on the great atmosphere at the "Palestinian Wiesn" in the village of Taybeh, where many visitors - Palestinians and foreigners alike - have traveled to the annual Oktoberfest. 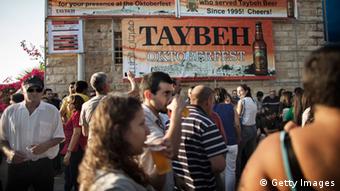 People come from all over to attend Oktoberfest in Taybeh

Bolus and his friend Fadi, wearing designer sunglasses and loose shemaghs over their shoulders, listen to the oom pah pah sounds of the brass band. Admittedly, it's a different rhythm than they're used to, but the two Palestinians still enjoy the music played by the band from the Bavarian town of Leobendorf.

"The music is actually quite nice, but the best thing is the great atmosphere," say the two, who traveled here from Haifa. They had heard a lot about the Taybeh Oktoberfest and wanted to experience it for themselves. "Everything is better anyway after a beer or two," Bolus says, smiling and holding up his glass to say "cheers!" with his friends.

Arine Shubari, from Nazareth, also appreciates the festive atmosphere here. "Hilwa ketir" (very nice), the young woman says. "Especially because so many Palestinians come - and they're not only from here, but also from far away. A lot of foreigners, too. And they all travel here for our Palestinian beer." 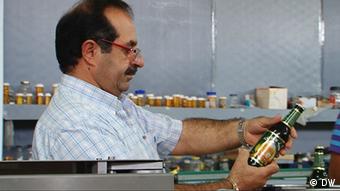 After all, beer is what Oktoberfest is really all about - whether it's the Palestinian youth testing their strength lifting beer kegs or just drinking a glass fresh from the tap from the local brewery. Either way, the beer flows generously.

Visitor Elia Ballan is a huge Taybeh fan, and loves the beer. "It's the best in the Middle East," says the man from Haifa, who has been at Oktoberfest for only half an hour and said he's downed five glasses.

The beer is brewed in Nadim Khoury's ultra-modern brewery, located just a few kilometers from Taybeh. Khoury returned to his native region in the 1990s, after having lived in the US. Some 2,000 Palestinians live in the tranquil place near Ramallah; the majority of them are Christians, allowing them - unlike Muslims - to imbibe.

"We had to struggle with a lot of problems over the years, whether economic, religious or cultural," the beer brewer says. "And we had to convince people that a locally produced beer can be of high quality." 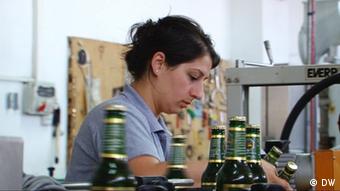 Advertising slogans like "Be revolutionary, drink Palestinian" have long won over local beer lovers. It also helps that the beer can advertise that it's been brewed according to the German beer purity law - the so-called Reinheitsgebot of 1516. It's something Khoury puts a lot of faith in.

Taybeh beer is now exported, despite the many trading limits imposed by the Israeli occupation. Khoury has also introduced a non-alcoholic beer to the market - with a green label, the symbolic color of the Prophet Muhammad.

Khoury's daughter, Madees, is now learning how to brew beer - also a novelty for the Arab world. The up-and-coming master brewer, casually dressed in jeans and with her dark hair uncovered, has devoted herself to the art of brewing.

"I've more or less grown up with it. I love my work," she says brightly. "And yes, it's unusual for a woman to brew beer in Palestine. People say: 'Oh, that's nice. We have great things in our country.'"

Oktoberfest as a form of protest 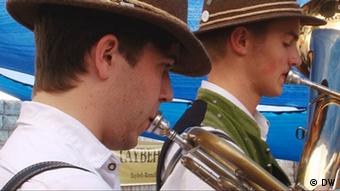 What would Oktoberfest be without a Bavrian brass band?

The Bavarian brass band has meanwhile been replaced by a Brazilian band. It's time to chat with them over a beer.

The brass band from Bavaria band never would have imagined that they'd land in the Palestinian West Bank. But after a little research on the Internet, they realized what they were missing. "Oktoberfest is a lot more down-to-earth here than in Bavaria," says Christian Helmiger, leader of the band. "The people are very nice and open; it's great."

The situation in the Palestinian territories isn't exactly the rosiest for having parties, but that's exactly the point, says brewmaster Nadim Khoury. "It's a kind of peaceful protest against the occupation," he says. "And we want to promote a different image. On TV, you normally only see shootings and explosions. Palestinians as terrorists. But we're just normal people. We love life, and we love to celebrate," he says.

Brazilian rhythms and locally brewed beer certainly help along the celebration - allowing some of the people here to forget the Middle East conflict, if only for an evening.

As more than 3.5 million visitors have visited Munich's Oktoberfest in its first week, the 16-day beer fest is set to break all records. Business is booming as the world spends big on beer, pretzel and Bavarian costumes. (02.10.2012)

The home of the Oktoberfest may be in Germany, but you don't need to go to Munich to experience the famous Bavarian beer festival. Instead, you can head to London, Ohio, Sydney, Brazil - or even Palestine. (22.09.2012)