The Specter of Hooliganism Returns | News and current affairs from Germany and around the world | DW | 07.04.2005

German soccer hooligans have made a violent return to the international stage with just over a year to go before Germany hosts the 2006 World Cup. Officials have faith in security measures but experts predict trouble. 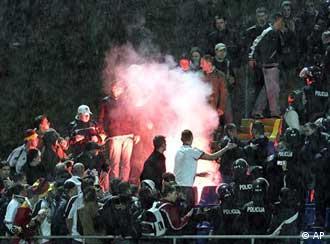 After four years in the dark, German hooliganism has burst into life again

German hooliganism initially took off on the international stage at the 1988 European Championships on home soil and to a larger extent four years later at the same tournament held in Sweden when the Germans matched the notorious England fans fist for boot.

German hooligans had increased their reputation among the European firms -- the insider name for groups -- over a number of years after a 'golden age' of disorder in the 1970s, when club soccer was blighted by violent rivalries and infiltration by politically motivated groups.

But, it was an incident in 1998 that really besmirched the world of German soccer. Just hours before the crucial match between Germany and Yugoslavia at the World Cup in France, the sunny tranquility of the city of Lens was shattered by hundreds of German soccer hooligans engaging in running battles with riot police.

While the 2-2 draw meant Germany progressed as Group F winners, the enduring memory of that day would be the sight of Gendarme Daniel Nivel fighting for his life on the bloodied sidewalk after being beaten into a coma by rampaging fans. 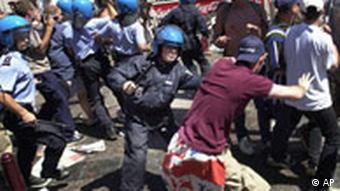 A Belgian riot police clubs an English soccer fan in the centre of Charleroi, Saturday June 17, 2000, following clashes between German and English hooligans ahead of the Euro 2000 soccer match England versus Germany.

Two years later at the European Championships in the Netherlands and Belgium, it was the turn of the Belgian town of Charleroi to count the cost of German hooliganism. Despite moving the potentially volatile clash between England and Germany to a stadium better equipped to cope with partisan fans, the authorities did not foresee the anarchy that would reduce the town center to a war-zone when the two rival 'firms' met in the alcohol-drenched hours before the game.

And then, after the dust of Charleroi had settled, there was very little to report. The World Cup in Japan/Korea in 2002 passed without incident due to the expense and distance of travel and the Far East's cultural environment while Euro 2004 in Portugal was hailed as an unqualified success in terms of security. Hooliganism looked to have been put on the back foot. 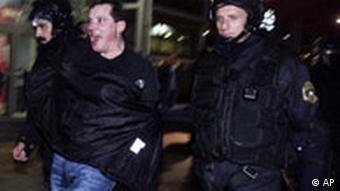 Until March 28, 2005 that is, when the shadow of German hooliganism once again crossed the face of the beautiful game when Germany played Slovenia in a friendly match in preparation for the World Cup in 2006. Over 40 Germans were arrested in the wake of rioting involving over 200 fans before, during and after the match in Celje and the violence raised fears of a resurgent hooligan element, preparing to disrupt the global soccer festival in Germany next year.

German officials were quick to assure the world that the violence of Celje would not be repeated in German cities during the World Cup. "The troublemakers target countries where they can get away with more," explained World Cup Organizing Committee Chairman Franz Beckenbauer after the violence. "The Slovenians underestimated the situation but that won't happen in Germany."

Slovenia riots a message to the world

But not everybody is convinced. "The Slovenia game gave the Germans the opportunity to announce to hooligans all over the world that they were still here," said John Williams, a European soccer hooliganism expert and one of the first academics to study the subject. "The riots put the message out there that the Germans are ready."

Williams admitted that the Slovenians didn't implement the same security and ticket restrictions that have been uniform across most of Europe for the last few years. "There were tickets for sale at the game; the stadium was not sold out. Saying that, both the Slovenians and the Germans underestimated the situation," he said.

Alfred Sengle, head of security for the German Football Federation (DFB), admitted the Slovenia incident would force Germany to review their security procedures for the World Cup. "The security aspects now need to be reviewed," said Sengle at a press conference. "The World Cup organizing committee is taking the incidents very seriously."

Clemens Binniger, a politician from the conservative Christian Democratic Union (CDU), called on the German Interior Ministry to alleviate fears and formulate clear initiatives for the World Cup. "At the next meeting, they should lay down concrete plans on how the danger of hooligan violence can be met," he told reporters. 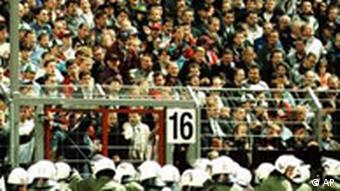 Gabriele Kautz, a spokesperson from the German Interior Ministry, however assured that existing policies, formulated on a European level in symposiums held over the last three years, had been finalized and would be implemented at the 2006 World Cup.

"Germany wants a safe World Cup. Under the leadership of the federal ministry, a committee of national and state officials are collaborating closely with national and international authorities on the so-called 'national security concept' for the World Cup 2006," she said.

"This concept includes the improvement of police authority collaboration through the deployment of liaison officers and the deployment of officers and organizations dealing with security issues," Kautz said, adding that security authorities would also share information on potentially disruptive people without compromising data protection policies.

Complex ticket regulations, stadium bans for trouble-makers, fast track court proceedings and undercover officers will feature in the concept, much as they did at Euro 2004.

Otto Schily, the federal minister for the interior, himself recently promised that the security forces would prevail. "The police will ensure that these rowdies won't be able to destroy the world's most beautiful celebration of soccer," he told reporters last week.

The German authorities are confident that the security measures and cooperations which helped to make Euro 2004 a relatively trouble-free tournament will have a similar effect on the World Cup. But John Williams urged caution. "Germany 2006 will have differences that must not be overlooked."

Williams cites the banning orders and traveling restrictions implemented by the joint European police initiative as a major factor in preventing German hooligans and ringleaders from attending the Euro 2004 tournament. But he is conscious of the differences between Portugal and Germany as host countries. 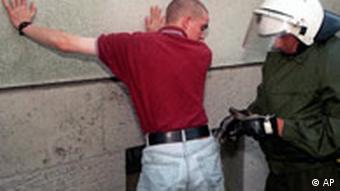 "Germany has a reputation for its fans. This may dissuade some casual supporters from abroad from attending the World Cup but encourage others with hooligan intent to travel in numbers. The security may be tight at the stadiums but there are no laws banning people from the streets and bars," Williams said.

While this, in essence, is true, Andreas Morbach from the German police's Central Sports Intelligence Unit said that public places would be protected: "There is a law in Germany which gives the police preventive powers. We can take known trouble-makers into preventive custody and place prohibition orders on certain areas, and even whole cities."

"Also, on specific days such as match days, we can order known hooligans to report to a police station at a certain time. It is possible in these situations to make them return every two hours in some cases."

John Williams accepts that while police identification of ringleaders would help, there would be more than the usual catalysts for trouble in Germany.

Violence may have only tenous link to soccer

Williams believes there are a number of risk factors for the World Cup: German hooligans may want to defend their turf; extreme displays of nationalism by German and visiting fans may incite minority groups within German society such as Turkish or Eastern European immigrants, and that potential violence may erupt between traveling fans and locals aggrieved at having large numbers of boisterous foreign supporters in their cities. 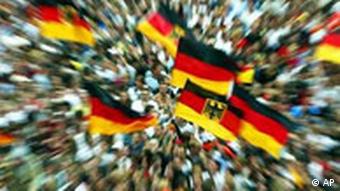 Saying that, no-one can be sure of what is gong to happen until nearer the time. "We have monitored hooligan Web sites and there is a lot of boasting and challenging about the World Cup. But it is very hard to tell which of these are credible threats. The tournament is still 15 months away," Williams concluded.

Andreas Morbach agreed: "It is still too early to tell if there is anything being planned but we know that the German hooligans will not want to lose face. They know they have to make a point."

German hooligans could be at the forefront of a "struggle for dominance" at the 2006 World Cup, according to hooliganism expert Professor Eric Downing in an interview with DW-WORLD. (April 5, 2005)