German hooligans could be at the forefront of a "struggle for dominance" at the 2006 World Cup, according to hooliganism expert Professor Eric Dunning in an interview with DW-WORLD. 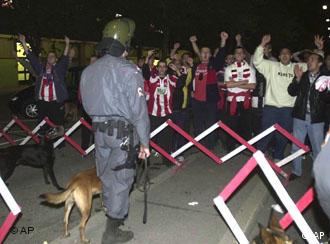 Could German streets become the frontline in hooligan clashes?

Prof. Dunning: Those in the former East Germany in particular have a neo-Nazi core where the task of the organization is more a political one. The political center of the group can have an agenda other than the one supported by the outer circle which could be along the lines of purely football rivalry. German hooligan groups with neo-Nazi influences within them may have a xenophobic or national pride aspect to their actions which forms a catalyst. Other hooligans may then get swept up in that and fight for what they see as team or national allegiance. In terms of football violence, the Germans are like many other hooligans in so much as some of the violence may be opportunist, spontaneous outbreaks while others can be meticulously organized. Some clashes can be politically motivated while others can be just for the pure adrenalin rush of fighting, something many hooligans have professed to being addictive, calling the buzz "better than sex and drugs."

As with many sophisticated hooligan elements in the modern game, especially within Europe, German hooligans use technology in their organization. Mobile phones are used to establish contact, to arrange fights and locations while the Internet plays a big role. While a lot of the chatter is made up of younger hooligans' bravado which doesn't come to much, there is evidence that Internet contact does lead to actual confrontations taking place.

Before the violence in Slovenia in March, there had been little or no large scale violence involving German hooligans on the international stage. What, in your opinion, has been happening in that time?

The problem has never gone away. It is obviously less of a problem that it was in the 60's, 70's and 80's but it has never been eradicated. Police forces have become more skilled at preventing hooliganism at stadiums and the immediate areas around them; monitoring entry points to cities and countries and identifying ringleaders. But hooligans have learnt to take their fighting away from the points where control measures are most efficiently executed. The fighting has been moved away from stadiums into railway stations, motorway service stations, even towns nowhere near those hosting matches. Surface policing (visual shows of strength, applied techniques at points of entry and stadiums) has been successful in keeping violence away from the where the game is played but only undercover operations can truly root out the core of hooligan organizations and prevent violence. In this respect, hooliganism has continued, only not as much in the public eye.

Is the 2006 World Cup in Germany destined to be tainted by hooliganism?

In my opinion, there will be a struggle for dominance at the World Cup with the Germans and the English at the forefront, with the Dutch and the Italians also involved. The Germans are perceived as one of the most violent groups in Europe, at the 1998 World Cup they also most beat a French police officer to death, and they will clearly have a home advantage. At the World Cups which offered little incentive for the hooligans, there was no violence. In the United States in 1994, the reputation of the armed US police did much to put hooligans off and the cultural differences in 2002 (in Japan/Korea) meant that very few traveled. Germany, with its proximity to many countries with rival hooligan groups, will not have that luxury.