Fans, not Hooligans the Story of Portugal | News and current affairs from Germany and around the world | DW | 03.07.2004

Soccer's chronic plague, hooliganism, was little more than a footnote at the European Soccer Championships in Portugal this year. Organizers say more effective measures and a new fan culture are the reasons. 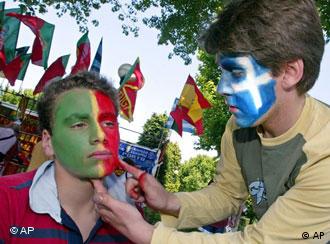 Am I doing it right?

After a promising tournament, the English national team lost a heartbreaking quarterfinal match last week in Lisbon on a penalty shootout.

Organizers were braced for the worst. English fans, by far the biggest group to attend the three-week European Soccer Championships in Portugal, already had a hand in rioting that led to injuries and arrests in the south of the country during the first week of the tournament. Now, police feared a bigger outbreak of hooliganism following the loss that eliminated the team from the tournament.

Instead, fans on both sides shook hands and exchanged compliments. On the streets of Lisbon, euphoric Portuguese, flags wrapped around their waists, consoled sullen English fans, their faces still painted with St. George's crosses.

"Everybody wants to be a winner, but in this game there are also losers," said Steve Collins, who had driven 34 hours from Manchester with his son just to see the game. "You have to be gallant when you lose."

The sentiment is evidence of what analysts say is a new fan culture to emerge from the tournament in Portugal. Hooliganism, the bane of tournaments both in Europe and on the world stage in the past, made only small appearances at European championships.

Nothing compared to past tournaments 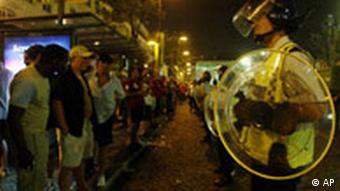 The most severe incidents took place in the Algarve region in the south of Portugal, where thousands of fans set up camp in the resort town of Albufeira. Riot police and mounted officers clashed with hundreds of fans on June 14, many of them English, arresting 33 people. England supporter Gary Mann, 46, was sentenced to two years in a Portuguese jail for inciting a riot, but English officials said he will not have to serve his term.

The interior ministry deported more than 64 fans, including 41 English and five German citizens, according to official figures. The five were in a group involved in a melee with Dutch fans ahead of Germany's game against Holland in Porto on June 15.

"If we compare them to the previous tournament (in Belgium and the Netherlands), I thought the numbers of arrests for public disorders would be relatively higher," said Paolo Gomes, the deputy head of the committee responsible for tournament security, in a DW-WORLD interview. "There is already talk of a new fan culture in Europe … where people are concentrating on the soccer itself, on living the moment, on enjoying themselves."

Leaning on the advice of experts

Gomes said that the Interior Ministry did place a high priority on keeping hooligans from disturbing the tournament. Better cooperation with police forces from the countries participating in this year's championships provided officials with comprehensive lists of violence-prone fans.

Portuguese police practiced rioting control in simulations leading up to the tournament.

Many weren't allowed to travel to Portugal in the first place. Those that did were caught at the border and sent home.

Law enforcement specialists from each of the participating countries also joined their counterparts in Portugal to keep an eye on violence-prone fans. English officers trained in containing fan rioting helped train Portuguese police.

"We should not forget that we have gathered relevant experience (at club tournaments) in recent years," Gomes said.

Some fans, however, said the Portuguese police were a little too aggressive in stopping potential troublemaking.

English fans told reporters that the situation in Albufeira only got out of hand because police officers were jittery. Paul Donahue, who was among those deported, told the BBC that he suffered broken ribs and other injuries from police brutality even though he wasn't doing anything wrong.

"We just feel like we've been made scapegoats," Donahue told the BBC.

Portuguese police deny they did anything wrong and that they will stick to the methods they have employed throughout the tournament. Some fans think they don't have any other option.

"These have become national showpieces," said Desmond McCabe, who was visiting his third soccer tournament with his family. "They can't afford to get it wrong."

When Portugal hosts this year's European Championship this summer, thousands of visiting soccer fans will spend plenty of euros. That's good for the economy, but the longer-term impact of the tournament is less clear. (June 7, 2004)

Portugal may have already spent millions on security in preparation for possible hooliganism at the Euro 2004 championships but authorities have said it is equally ready to avert any terror strike at the finals. (May 28, 2004)

Click here for our complete special coverage of the European Championships

Ada Hegerberg's return to international football was a disappointment, as the star player did little to improve a disjointed Norway. A team touted as favorites have fallen far short of their own lofty expectations.