The Siemens-Alstom deal: A closer look | Business| Economy and finance news from a German perspective | DW | 27.09.2017

The Siemens-Alstom deal: A closer look

The deal merging Siemens' railway division with train maker Alstom has been hailed as the making of a "European champion." But what will it mean for workers, and will it be enough to compete with Chinese behemoth CRRC? 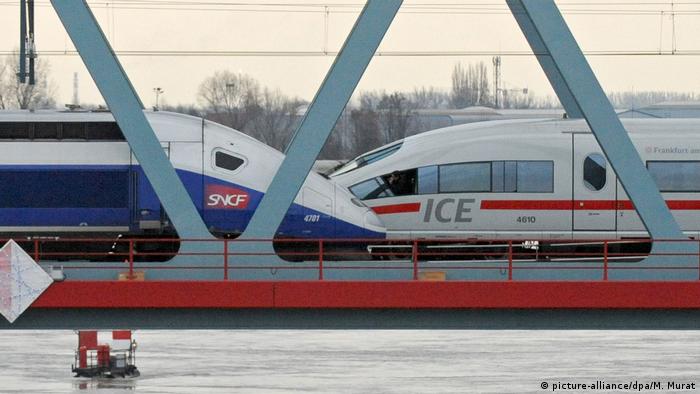 At times, the rhetoric was soaring. At a press conference on Wednesday morning held by the CEOs of Germany's Siemens and France's Alstom to mark their historic train production merger, there was talk of "the European spirit" being alive and well and of a "powerful message" being delivered in dark times.

The deal to merge their extensive rail operations has been heralded in glowingly positive terms by both companies as the creation of a "European champion."

"The message is clear - the European spirit is alive," declared Siemens CEO Joe Kaeser. He hailed the deal as a "powerful message in times of populism, nationalism, social and political divides and self-centered leadership," and also made several thinly veiled references to US President Donald Trump.

Alstom CEO Henri Poupart-Lafarge, who will head the new Siemens-Alstom group, was equally effusive. While the enthusiasm was understandable, plenty of questions result from the merger, which will see the new entity catapult into second place in the list of the world's leading train builders.

There is the looming question of the increasing power and dominance of number one in that list, the Chinese state-owned CRRC. Then there's the issue of job losses, particularly sensitive in France, where takeovers and mergers have been historically unpopular and where there is plenty of union and political opposition to the French state's strong support for the deal. Not least, there's also the matter of antitrust competition law and what the European Commission's take will be.

A European champion, a Chinese superpower?

The merger of China's two largest train or "rolling stock" manufacturers to form CRRC in 2015 transformed the global market. Clearly aiming to become more competitive on the world stage, that merger has had precisely that effect as CRRC is by a huge distance the world's largest rolling stock manufacturer, boosted especially by its unfettered access to its own domestic market.

In terms of worldwide delivery by locomotive manufacturers from 2011 to 2015, CRRC provided almost half (46 percent) of the planet's stock, according to an independent study by consulting firm SCI Verkehr.

The Siemens-Alstom merger will put the company into a clear second place, with around 20 percent market share, but, future European torchbearer or not, the scale of the challenge it faces in competing with CRRC is underlined by the fact that the Chinese giant currently sells around $35 billion (€29.7 billion) worth of railway infrastructure annually, more than its rivals Siemens-Alstom, Bombardier and General Electric combined.

By contrast, the combined sales of Siemens and Alstom came in at around half of that last year, at $18 billion.

Since its own merger in 2015, CRRC has increasingly switched its focus from China toward Europe and other parts of the world. In this context, the Siemens-Alstom merger, and all the talk of "the European spirit," can clearly be interpreted as an attempt by two industrial European powers, and indeed the French government, at upping their game in the face of the Chinese challenge.

Siemens and Alstom expect the deal - by year four at least - to achieve annual savings of about $550 million as a result of the overlap of much of their operations. Yet, that has inevitably led to fears of job losses, particularly in Alstom's operations in France, where opposition has been strongest.

Siemens CEO Kaeser admitted on Wednesday that there would be job losses but he was short on details. Siemens-Alstom will employ 62,300 people when they officially join together.

"The merger is necessary to challenge the Chinese mastodon (CRRC) which is two to three times bigger than we are," said Claude Mandart, head of the CFE-CGC, one of the key Alstom trade unions. "At the same time, we're worried because we're in direct competition with Siemens in all areas."

IG Metall, the influential German metalworkers union, issued a statement in broad support of the deal, but it underlined the importance of securing jobs. "It is not companies that grow together, rather it is the people working there. Employees therefore need security and good future prospects," said Jürgen Kerner, a senior leader of the union.

As for the issue of antitrust, both Siemens and Alstom appear confident. "We believe that there is no fundamental risk," asserted Poupart-Lafarge.

'We need to be realistic'

While market watchers have been somewhat mixed in their reactions to the news - Deutsche Bank expressed some doubt in the cost-saving potential of the deal, for example - Florent Laroche, an associate professor in transport economics at the University of Lyon, sees the deal as "a good signal for the European industry and future."

He told DW that while it is true that CRRC currently dominates the overall global market in terms of revenues, the company would not do so without having such protected access to the huge Chinese domestic market.

"It would be more relevant to compare the different players according to their turnover on the international market," Laroche argued. "According to this yardstick, Alstom and Siemens are the world leaders. Yet it is obvious that without a merger, and considering the aggressive strategy of CRRC, it will be difficult to remain at the top if nothing is done."

Laroche says the deal is not a surprise, given that the European Parliament called for a consolidation of the European rail supply industry as far back as June 2016. "The European industry is inherited from the national monopolies with one customer for each industry. This model is over and the industries need to extend their market and their critical mass to be competitive," he pointed out.

In terms of the prospect of job losses, particularly in France, he noted that jobs were already under threat in some Alstom factories in France. "A merger with Siemens could be an opportunity to renew activity," he said, "and concerning the national strategy, we need to be realistic. Can we make a world leader alone? Certainly not."

Siemens and Alstom clearly believe they are stronger together, and if they are proven right, many others in Europe will start believing the same.

The French President Emmanuel Macron has laid out his vision for a more federal Europe. We look at what he wants and and the chances of it being executed in the face of German reluctance. (26.09.2017)