When the French diving instructor Henri Cosquer discovered in 1985 the access to a flooded cave at a depth of 37 meters (121 feet), during a diving tour in the Mediterranean off the coast of Marseille, he didn't know that it concealed an archaeological sensation.

He and his companions dived down to the entrance of the cave several times over the next few months. But it wasn't until 1991 that he managed to reach the main cave through a tunnel. It would later bear his name.

The archaeologists and scientists who later examined the cave found that the drawings were approximately 19,000 to 27,000 years old. The paintings mainly showed animals — seals, fish, horses, bison, mountain goats, sea birds — that were surprisingly lifelike.

"It's the only underwater Stone Age cave that is known to us to date," explains marine archaeologist Fritz Jürgens from the University of Kiel, who also dives to explore such caves. "There are particularly good conservation conditions there."

Towards the end of an ice age, this cave, which is about 11 kilometers (7 miles) off the coast in southern France, was used and painted by Stone Age people. But as the polar ice caps thawed, the sea level gradually rose, and the cave entrance was at some point deep under water. Yet the higher cave itself remained dry.

"That's how these 20,000-year-old and very unique Stone Age cave paintings survived," researcher Jürgens told DW. "They include a stencil painting of a human hand and the only known Stone Age depiction of a penguin." 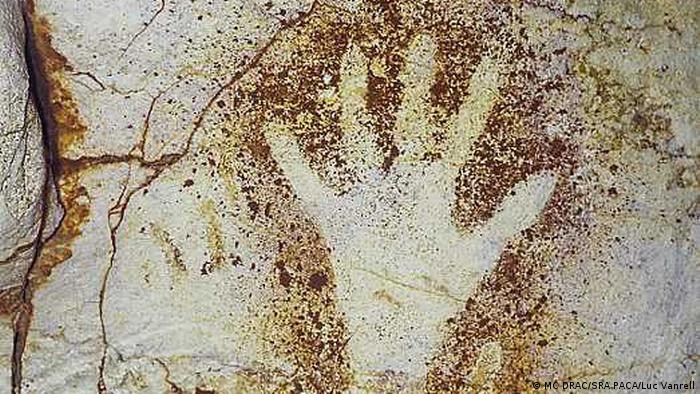 The stenciled Stone Age hand in the Cosquer Cave

A replica to secure the prehistoric art

The prehistoric Cosquer Cave is now a protected area open only to researchers.

"The Lascaux caves, for example, were opened to visitors after they were discovered," points out Fritz Jürgens. "But within 50 years, the visitors' torches and breathing had damaged the works of art so badly that they had to be closed."

Scientists and specialists are currently building an exact replica of the Cosquer Cave for a maritime museum in Marseille. It is scheduled to be made public in June 2022. The original cave is threatened by rising sea levels, due to climate change. 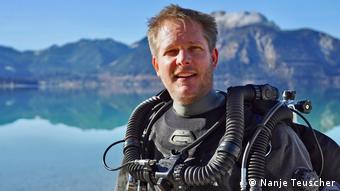 Underwater archaeology is a special method taught at the Institute for Pre- and Protohistoric Archaeology at the University of Kiel, where Fritz Jürgens also completed his training. Each year, only 10 to 12 students are trained there, and the job opportunities for graduates are limited.

Jürgens' colleague Florian Huber has been working as a professional research diver for many years and dives in the North and Baltic Seas, as well as in large inland lakes in Germany. "As underwater archaeologists, we actually find all kinds of items that were thrown or got into the water at some point, from the Stone Age to World War II," he told DW. "Of course, there are shipwrecks that we find everywhere — in rivers, lakes and seas. And we find submerged settlements that are now under water due to the rise in sea levels." 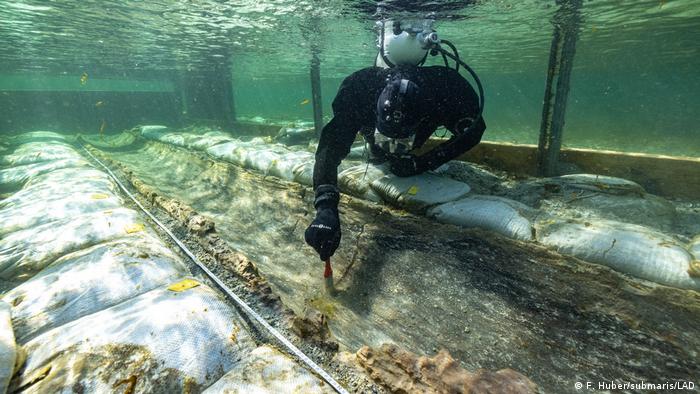 Excavation of a boat from the 24th-23th century BC, found in Lake Constance

This is an advantage over conventional archaeology, says Jürgens. "Things are preserved under water that would have long since disappeared on land: all organic materials, for example textiles, leather and wood. On land they only survive in the rarest of cases."

Most finds are accidental

Archaeological research under water also has a clear disadvantage: the GPS system, which has already contributed to spotting many sensational terrestrial finds from the air, does not work at greater water depths. "It only goes a few centimeters below the surface of the water. Then it breaks off," says archaeologist Huber.

"What we use in underwater archaeology to track down finds are side scans or multibeams. We scan the seafloor with acoustic signals. These are reflected, come back to the research vessel and are visualized on the computer as converted signals. And then we can see if there is a wreck on the ocean floor."

Historical nautical charts or logbooks are also used by underwater archaeologists, but most finds are discovered by chance, says Huber. "New discoveries are always being made underwater, for instance, when new port facilities are built, but also by recreational divers who go down and discover shipwrecks, remains of boats or stakes underwater somewhere."

As German law specifies that all finds must be notified to authorities, researchers can usually quickly secure new archaeological sites. 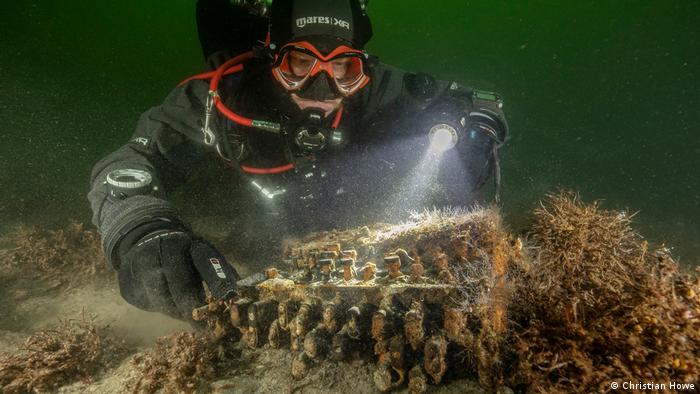 In 2020, Huber found an Enigma machine from World War II

Underwater archaeologists don't only dive for research purposes. Huber and his company in Kiel often work for the World Wildlife Fund (WWF). "Mainly to salvage ghost nets in the Baltic Sea. These are abandoned fishing nets that have been lost but continue to drift in the sea. And fish, birds, whales, seals or turtles can get tangled up in them and die."

It was on one of those missions that Huber's team made a sensational find in 2020, not from the Stone Age, but from the Second World War. "We found an Enigma machine in one of the nets." The special typewriter was developed and used by the Nazis to encode and decipher their encrypted messages during WWII. The find attracted international media attention. For the team of scientists, it was definitely a more valuable discovery than finding ancient gold coins.