Discovered by chance in 1940, the 20,000-year-old art in France's Lascaux cave is so fragile, visitors can't see it. The second replica of the valuable ancient treasures is opening to the public this week.

The International Center for Cave Paintings is a museum just outside a small French town called Montignac, in the Dordogne. The long grey building designed by the Norwegian architectural firm Snohetta creates a rocky edge in the natural slope where it is built.

From the flat roof, a path leads down the hill to the entrance of an artificial cave, eight meters (26 feet) under the earth, which reproduces the famous Lascaux Caves.

The air is cool and humid, just like in a real grotto. Archaeologist Jean-Pierre Chadelle points towards the entrance above us: A dim light shines on a pile of rubble. "This reproduces the exact state of the cave when explorers found it," says Chadelle. "The heap was removed in 1958. The numerous visitors breathing in the small cave created such a high concentration of carbon dioxide that many people started fainting, so a huge machine had to be installed instead to allow the air to circulate."

How people painted during the Stone Age

The original caves with the famous Paleolithic art were also disfigured by pipelines and protective grids, whereas the reproduction goes without them. The paintings are, however, identical.

"The pigments have kept their strong colors, red, yellow, black. We can recognize the Stone Age painting techniques: They sprayed the pigments on the wall to portray the snout and the fluffy fur on the throat of the bull. You can even see in which direction they turned their writing instruments to draw these small dots," says the archaeologist, sounding as enthusiastic as if he were standing in the real cave, which he has also researched himself. 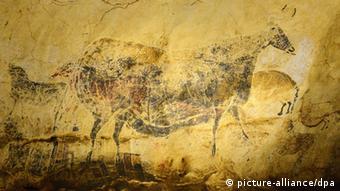 The first hall is lushly painted, with oxen on both sides, as well as wild horses, deer and wild goats. The following cave is almost bare in contrast. Calcite did not build up on its walls; without this mineral, the pigments couldn't adhere well to the rock. Researchers have still found many drawings there: "There are about 1,000 drawings incised into the stone. That's about a tenth of all the cave drawings known worldwide. This also shows how little is left from those communities," says Jean-Pierre Chadelle.

To better decipher the drawings, the so-called Lascaux workshop can be visited right after going through the life-size replica of the Lascaux cave. The exhibition highlights individual paintings. Ultraviolet light reveals some of the more hidden incision drawings. The only depiction of a human figure can also be seen here: It is a man with a bird's head and an erected penis. He was painted in a well shaft that is difficult to reach.

The history of Lascaux also includes a history of original paintings and copies. The cave was discovered in 1940 and opened to the public after World War II. The 1,200 visitors per day threatened the 20,000-year-old paintings. They were therefore closed to visitors in 1963.

A partial copy of the caves opened 20 years later, called Lascaux 2. It was extremely popular, but as it was located too close to the real caves, it started threatening them, too, with mold spreading through the walls and ceiling.

That's why Lascaux 4 was built with the most modern techniques, and far away enough from the original caves. Lascaux 3 is the name of a wandering exhibition shown in different locations worldwide.

"The new exhibition center is perfectly suited to transmit knowledge about cave painting," says conservator Muriel Mauriac, who also monitors the conditions in the real cave.

Conditions in Lascaux I stabilized

At the beginning of the 2000s, researchers sounded the alarm when they discovered white and black mold was developing. Meanwhile, the state of the caves has stabilized, according to Mauriac. "We have to be extremely careful; we have developed research programs to better understand the processes in the cave."

A Bronze Age sculpture has been uncovered at an excavation site near Tel Aviv, in an area intended for the construction of houses. Archaeologists have hailed the piece, which depicts a figure "in a state of reflection." (23.11.2016)

A Mayan ruler was once thought to have been buried at the control center of a spaceship. Now, researchers have found that he's buried above a canal system, which would carry him down to the underworld. (26.07.2016)

For the first time since its discovery, Egypt has opened the tomb of King Tutankhamun's wet nurse Maya. The antiquities minister said the boy king's enigmatic wet nurse may have been his sister Princess Mirette Atun. (20.12.2015)