"Madonna Benois" and "Madonna Litta": Of Leonardo da Vinci's nearly 20 preserved paintings, two are located in Russia. From June on, they are on show in Italy for a brief period. But are they authentic? 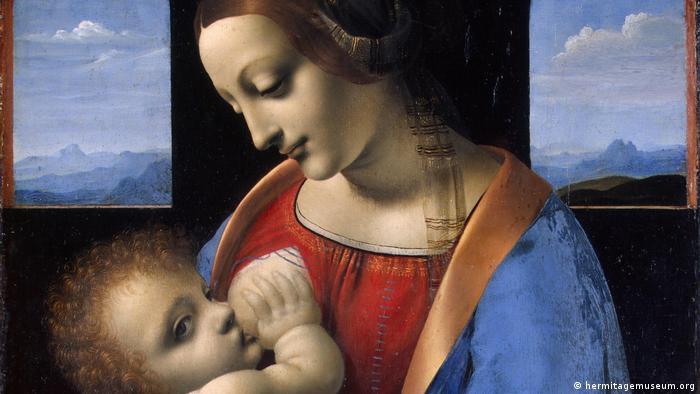 After France, Russia possesses the second most Da Vinci masterworks on the planet. While five artworks by the Italian Renaissance master are held by the Louvre — and museums in Florence, Munich, Krakow, London and Washington have one a piece — the Hermitage of St. Petersburg is the proud owner of two "Leonardos."

These came to Russia via interweaving paths. Named after the previous owners, Benois Madonna and Madonna Litta, the jury is still out on the authenticity of the latter — though the State Hermitage Museum promises it's a genuine Leonardo. Nonetheless, on the fifth centenary of the artist's death, both paintings will travel outside of Russia, offering a rare opportunity to bring the masterworks to a wider audience.

Back to Italy — for a brief period

The route leads to the historical homeland: Benois Madonna, also known as Madonna and Child with Flowers, is on display from June 1, 2019 for one month in the small Italian town of Fabriano, and then from July 4 to August 4 in Perugia. In June, Fabriano will host a major UNESCO conference dedicated to "Creative Cities," in which Russia will also participate. Madonna Litta will be exhibited in Milan from November 8, 2019 to February 2020.

The fact that both pictures are allowed to leave Russia in the "Leonardo Year" of all years is mainly due to diplomatic skill and a "generous counteroffer" on the party of Italy: Italian museums support numerous exhibitions in Saint Petersburg with their loans. The "Madonna Tour" can certainly also be interpreted as a symbolic gesture: Hermitage Director Mikhail Piotrovsky likes to see himself as a counterpart to the numerous isolationists of Russian cultural policy. 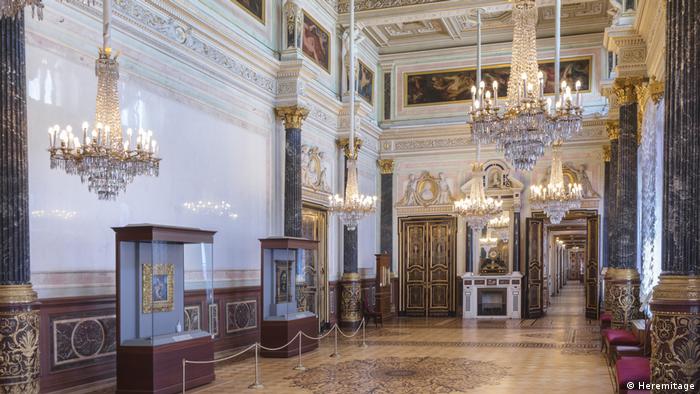 The "Leonardo Hall" in the Hermitage in St. Petersburg

Not everyone in the Hermitage is enthusiastic about the exhibition plans. "I have a queasy feeling about all this traveling," confessed Hermitage expert Tatyana Kustodiyeva. "The best thing for such pictures is not to leave their museums. After all, every day thousands of people from home and abroad come to the Hermitage to see the Leonardos."

For an incredible past five decades, the elegant and resolute lady has been responsible for the storage of the two "Russian Leonardos." She also directed the redesign of the Leonardo Hall of the Hermitage, which was completed in time for the anniversary year. Both masterpieces were fitted with new air-conditioned and armored display cases, and the placement of the works in the hall was also changed. 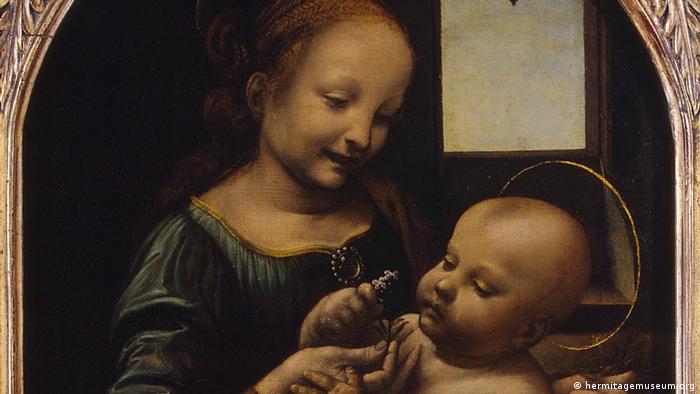 Fragile beauty of the Benois Madonna

"The Benois is absolutely unique because there is hardly anything preserved of Leonardo's early works," said Kustodijeva. The painting, with the mother of Jesus depicted in delicate, green-gold shimmering colors, is probably one of the first independent works of the master, which he would have created at the age of 26-27. Leonardo had just left the workshop of his teacher Andrea del Verrocchio.

Legend has it that the painting was brought to Russia by Italian musicians around 1790. Since the beginning of the 19th century, the work was stored in large private collections until it was handed over to Maria Saposhnikova and her husband Leonti Benois as an heirloom at the beginning of the 20th century. Benois, the offspring of a famous Russian-French dynasty of architects and artists, sold the painting to Tsar Nicholas II in 1914 for 150 thousand gold rubles, which at that time was about the equivalent of 1.5 million dollars — a record price for the time.

If in the case of the Benois Madonna there is no doubt that it is a Leonardo, then the second Hermitage picture, Madonna Litta, remains in the crossfire of debate. Some art historians, among them leading British Leonardo expert Martin Kemp, Oxford professor and author of the book Living with Leonardo, are of the opinion that the painting was created in the surroundings of the master and according to his drawing, but was painted around 1490-1495 by Giovanni Antonio Boltraffio. The Virgin Mary is dressed in traditional red and blue, with the colors glowing (see top picture).

Tatyana Kustodiyeva defends her charge decisively: "Generations of art historians have recognized Madonna Litta as a Leonardo painting; the Hermitage has irrefutable evidence. And anyway, rub your eyes, you doubters, and take a good look at this jewel!" The painting was purchased in 1864 as a true "Leonardo" from the Milan aristocrat Antonio Litta for the Russian tsar's collection.

At the exhibition in Milan, the painting will presumably be shown as a Leonardo — so a further escalation of the dispute among experts is inevitable.

Another bone of contention in the world of Leonardo experts is the Salvator Mundi. The representation of Christ, which was formerly a part of the collection of Russian billionaire Dmitry Rybolovlev, was sold at Christie's in November 2017 for $450.3 million (€399.5 million).

The buyer, Saudi Crown Prince Mohammed bin Salman, stated that he wanted to exhibit the painting in the Louvre Abu Dhabi as a "gift to the world." For several months, however, the picture has been missing. Neither the Louvre nor its branch in Saudi Arabia can provide information about the whereabouts of the most expensive picture in the world. However, there are persistent doubts about its authenticity.

Britishman Martin Kemp confirmed Leonardo's handwriting at that time. "For me, there is no doubt that it is not a Leonardo Da Vinci," retorted Hermitage expert Tatyana Kustodiyeva. "Look at how roughly the clothes are painted, or the ball in his hand: this is no Leonardo, but at most the work of one of his less gifted pupils."

So the Da Vinci thriller doesn't seem to want come to a close —  not even 500 years after the death of the great painter.