The rise of wooden skyscrapers | Environment | All topics from climate change to conservation | DW | 10.04.2018

The rise of wooden skyscrapers

Forget steel and concrete — wood is the latest go-to material for building skyscrapers. The renewable resource has high potential. 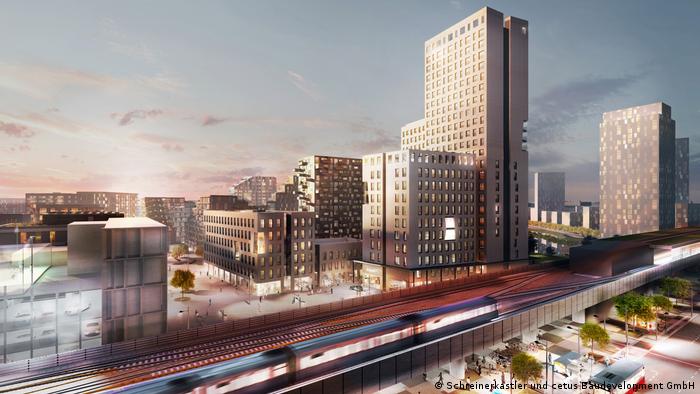 "The world's tallest wooden house!" reads a huge poster on the side of a building under construction in the Norwegian municipality of Brummundal.

The house doesn't have any scaffolding; cranes and an outdoor elevator are used to transport the building material to where it's needed. The wood is sourced from Norwegian forests. 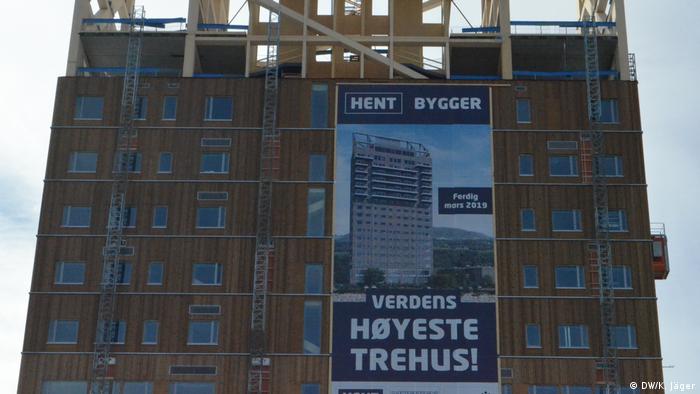 Maybe not "the world's tallest wooden house," as the poster reads - it will be 81 meters tall when completed

But despite the declaration on the poster, this is not actually the world's tallest wooden house after all. Vienna is currently working on an 84-meter-tall wooden building 24 stories tall (with a staircase made out of cement).

The building in Vienna will also combine apartments with offices, shops and a spa.

Ask the Austrians and they will tell you they're the ones who came up with the concept of using wood as an industrial product. Austria is the world's largest producer of cross-laminated timber.

And though that may sound unsustainable, it's done under the number-one rule of Austria's lumber industry: Never log more than can grow back.

In the Parisian district of Terne, an entire building complex is being built from cross-laminated timber and glass.

The rooftops of the structures — which will be nine stories tall — will be accessible to the public, and are supposed to encourage citizens to engage in urban gardening.

In Germany, an eight-story wooden house was built on an area that used to belong to the United States army in the Bavarian town of Bad Aibling. It is a current showpiece for energy-efficient construction. 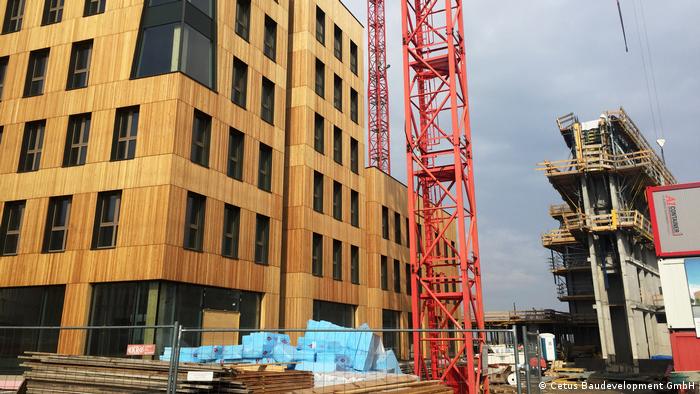 This wooden building in Vienna will combine apartments with offices, shops and even a spa

Berlin architects Kaden+Lager are building Germany's tallest building, the Skaio building in Heilbronn, using mostly wood. It will have 10 stories and be 34 meters tall.

Renowned architect Tom Kaden told German magazine Das Haus that he wants to make wooden houses affordable for everyone. That's why he uses metal rather than wooden nails. It's all about making the most of each material, he says.

Kaden teaches architecture and wooden construction at a university in Austria. There aren't more wooden houses yet because every architect and every carpenter has to create new models every time. This is not efficient, he points out.

"Today, we have hundreds of different ways of building timber houses. That's not profitable."

What's more, local planning and building laws often limit construction with wood. Germany has no country-wide regulations yet, and often individual permits are necessary, which are time-intensive and costly.

It's not surprising then that projects for the most spectacular wooden buildings only exist on paper so far. 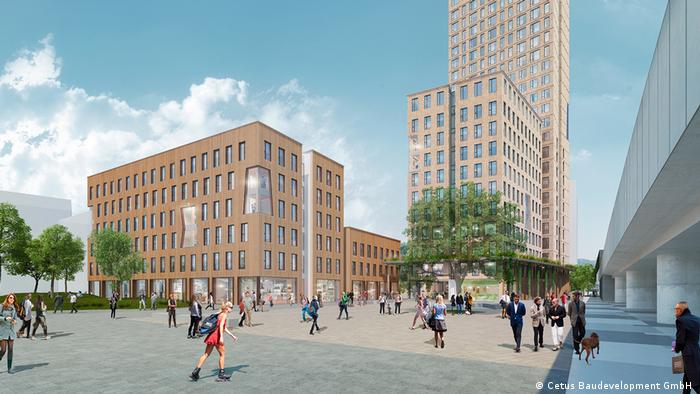 Architects and researchers at the University of Cambridge created a concept for London's first wooden skyscraper. The wooden frame of the 80-story-high "Oakwood Towers" is supposed to rise 300 meters into the sky.

"Using wood as a construction material could change the way we build in this city," says architect Kevin Flanagan. "Wooden houses have the potential to create a more visually appealing, relaxing and creative experience."

A wooden high-rise planned for Tokyo will stand at 70 stories and 350 meters tall.

Ever more people are moving into cities. By using wood as a construction material for houses, nature can re-enter urban spaces.

And wood can be an environmentally friendly choice as well. Wood is a renewable resource — it grows back after being logged — and growing trees remove the greenhouse gas CO2 from the atmosphere.

As long as a wooden building stands, that carbon dioxide is locked away from contributing to climate change. 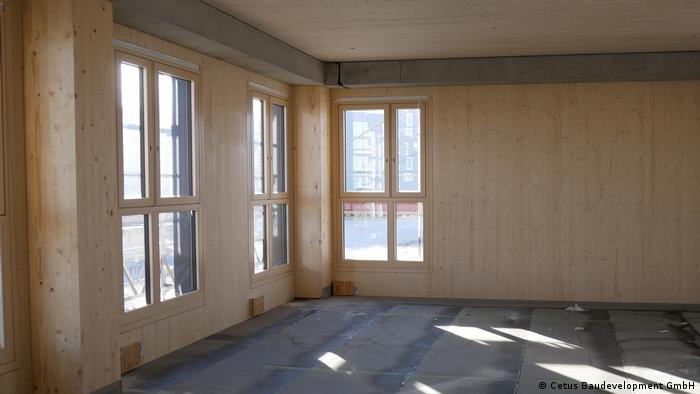 Timber as a building material has many advantages, but architects say it's still not profitable enough

The fact that wooden buildings are becoming increasingly taller and more extensive is due to the possibilities inherent in the original raw material.

Plywoods and laminated veneer can be glued together in order to form several layers at right angles to one another. Cross-laminated timber is easy to process, very stable across dimensions, and can transfer its load both lengthwise and crosswise.

Wooden elements can be used in construction of detached and semi-detached houses, multi-story housing, schools, commercial, religious, and industrial buildings for the roof, ceiling and wall components.

Whole sections can be pre-made and erected quickly on-site. Due to the relative strength and lightness of the wood, it is also suitable for closing gaps, or construction projects on existing buildings.

Some structures are quite spectacular, such as the wooden dome of the elephant house in the Zurich Zoo.

Resistance to earthquakes is another advantage of building with wood. With regard to fire safety, architect Tom Kaden refutes claims wood can be dangerous.

"Every well-trained firefighter knows today that an adequate solid wood construction made from cross-laminated timber will withstand fire long enough for them to rescue the residents," he told DW.

"At the end of its life, a wooden house will still be easy to recycle," he added.

The wood-building community of Frickingen is not building up, but rather out. For 30 years, the municipality has been using silver firs from local forests, and has since become a leader in climate protection in Germany.

At the beginning, however, architect Manfred Fetscher had to fight for his projects.

"In terms of prices, ours were significantly lower than those of our competitors who do not build with wood," he told DW. "We were obviously too cheap, which seemed suspicious to the clients."

Today, everyone is thrilled with the individual buildings, says Frickingen Mayor Jürgen Stukle.

"They have charm and flair — even after 30 years — and so far we have had almost no costs for the renovations."

Massive quantities of illegal timber may have been imported into the European Union by inventing fake trees, according to a report released this week by Greenpeace. (21.03.2018)

Wood to build human body parts — and other bio-innovations

Experts around the world agree that bio-based products are essential for a sustainable society. Researchers are working hard to develop innovative projects such as regenerating human body parts out of wood fibers. (14.02.2018)