The rebellion of Lanzarote chambermaids | Business | Economy and finance news from a German perspective | DW | 22.04.2019

The rebellion of Lanzarote chambermaids

Low wages can be found in many sectors of Spain's economy. That's particularly obvious in the hotel industry, where wages come close to exploitation. Chambermaids are staging protests, as Stephanie Müller reports. 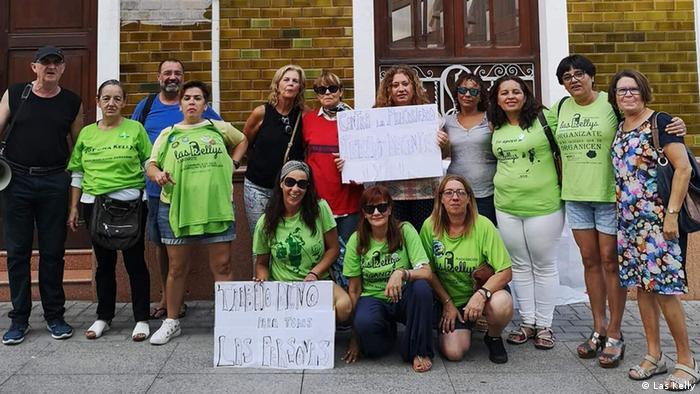 Until the turn of the century, hotel guests in Spain would give the chambermaid a tip before leaving. It was clear that they earned little, and visitors wanted to show their gratitude for the hard work of restoring complete order for the next guest to feel at home.

But, over the past two decades, the situation has become a lot worse; tips are hardly given anymore. About 82 million foreign vacationers come to Spain every year, and they've become more demanding. Rooms have gotten bigger, while wages have gone down.

"Cleaning has become modern-day slavery," says Maria Carmen Caston, who used to work in various hotels for many years. "We'd received the lowest wages of all anyway, but since the global financial crisis in 2008 many of us have worked for temporary employment agencies as this is even cheaper for hotels." The chambermaids concerned do not have collective bargaining agreements to fall back on. The big trade unions in Spain do not care much about the maids either.

According to Spanish hotel lobby group Confederacion Espanola de Hoteles y Alojamientos Turisticos (CEHAT), the average gross wage in the country is €1,560 ($1,756) — that's not so bad by Spanish standards, but only 40% of employees get it. Low wages are not just a problem among chambermaids. "Whether it's academic professions or jobs in call centers — we are below the EU average," says Madrid-based economist Aldo Olcese.

On Lanzarote, one of Spain's Canary Islands that lie off the coast of North Africa, chambermaids teamed up as their anger over low wages grew. Frustrated female employees got organized in the Las Kellys group and took to the streets in their colorful shirts. Not only did they raise public awareness about their own situation, but also conditions of workers in other services and the nursing sector.

In the spring of 2018, they were received by former Prime Minister Mariano Rajoy. His successor, Pedro Sanchez, wants to bring about improvements, should he stay in power after the April 28 elections. There's no lobby group for chambermaids in Spain, but similar protest movements exist in Italy, Greece and Argentina. 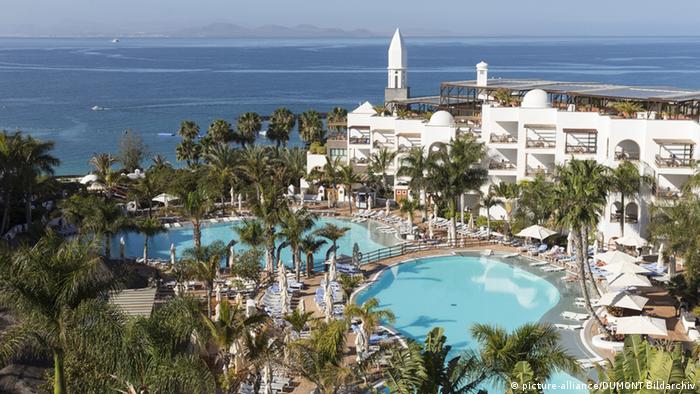 Lanzarote attracts hundreds of thousands of vacationers annually. Packages including hotel accomodation are not exactly cheap, but local chambermaids don't get a decent slice of the cake

Whoever visits Spain's Mediterranean island of Mallorca as a vacationer might not notice how working conditions for hotel employees are getting increasingly worse, whether it's at the reception or in the restaurant. "Managers want people who speak three languages, but they pay under €1,300 in take-home wages per month," complains Ricardo Sanchez.

The 30-year-old trained as a hotel clerk in Germany. "But that's worth nothing here. Job contracts involve quite a bit of resourcefulness to reduce employers' social insurance contributions." Sanchez has predominantly worked in five-star hotels in Madrid and Seville. "The situation is likely to be even worse in lower-category hotels."

Sara Garcia from the Spanish trade union USO says there have to be concrete improvements. "To reach the European average and be able to live decent lives we need wage hikes of 4% annually for a longer period." Right now, though, annual wage increases hover around just 1%.

Economist Aldo Olcese welcomes the recent 22% minimum wage increase to €900 a month. "Higher wages have a motivating function; we've exploited our workers in the past years which has seen our productivity suffering."

The 2012 labor market reforms enacted under Rajoy did create some new jobs, but the shadow economy still accounts for 25% of Spain's gross domestic product (GDP). Officially, the unemployment rate is 14%. Las Kellys President Myriam Barros demands more on-site inspections and wants trade union officials to change their mentality. "The unions have become inert; they're too slow and don't know how to handle social media."

While Barros is still a chambermaid, Maria Carmen Caston now works as a nanny as the Las Kellys movement came too late for her. Like many of her former colleagues, Caston was left with acute back pain from her previous job. "There was a time when chambermaid was a profession of its own, but nowadays ordinary cleaners have to do that job."

The job is demanding physically. "You have to move pieces of furniture and heavy laundry carts," Caston explains.

On top of that, the job requires dealing with more and more aggressive detergents that can trigger allergic reactions. "A worker cleans 20 to 30 rooms per day — a third of these rooms have to be cleaned completely when guests have left the hotel," says Barros. That's 15 minutes per room for a gross wage of €2.50.

Robots to the rescue?

"On Lanzarote, where tourism is our only source of income, we all have a daughter or friend working as a chambermaid, and we fight for their future," says Barros. She says they're being exploited by big hotel chains, but also by hotels from the welfare and charity category which pretend to be different from the rest.

Barros doesn't hold the tourists accountable for the chambermaids' situation, but says it wouldn't do any harm, if vacationers were more careful about picking the right hotel. "If they paid more attention to how employees get treated, there would be faster changes in the sector." For the time being, she's dreaming about "robots that carry the laundry for me and operate the vacuum cleaner — that could make our job a lot easier."