Spain's labor unions have taken to the streets of Madrid to protest government austerity measures. With the country emerging from an economic downturn, the protesters have demanded an increase in salaries and pensions. 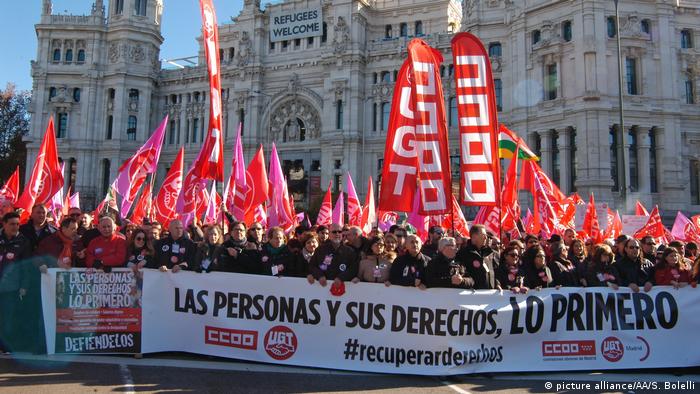 Some 30,000 protesters marched on the streets in the Spanish capital, Madrid, on Sunday, protesting the government's labor policies, according to local media.

The protest was organized by the country's two main labor unions, UGT and CCOO, under the theme "People and their rights first." The march, backed by the Socialists and far-left Podemos (We Can) parties, was followed by dozens of smaller rallies across the country.

"We won't allow the government to maintain the cuts of recent years," said UGT leader Jose Maria Alvarez. "These demonstrations will continue if necessary. It only depends on the government's ability not only to discuss, but also to negotiate and make agreements."

Labor unions have said that Madrid's austerity measures - cuts to public spending and labor reforms intended to deal with the five-year economic crisis - have hurt workers.

In 2012, the conservative-led government of Prime Minister Mariano Rajoy overhauled Spain's labor laws to make it cheaper for companies to fire workers. But the country's economy has shown signs of improvement in recent years. The unemployment rate is down from 27 percent in 2013 to under 20 percent this year - still the second highest percentage in the European Union.

"It's a key moment. Now is when the policies that will mark the budget for next year are being decided," said CCOO leader Ignacio Fernandez Toxo.

Labor Minister Fatima Banez urged the unions to engage in talks with the government instead of protesting.

"If the unions want a change, then they should agree to one with employers and we will consider it," Banez told Cope radio.

The newly-elected mayors of Madrid and Barcelona, both female, have been sworn in on anti-austerity programs. Both intend to cut their own salaries, halt home evictions and end the privatization of city services. (14.06.2015)