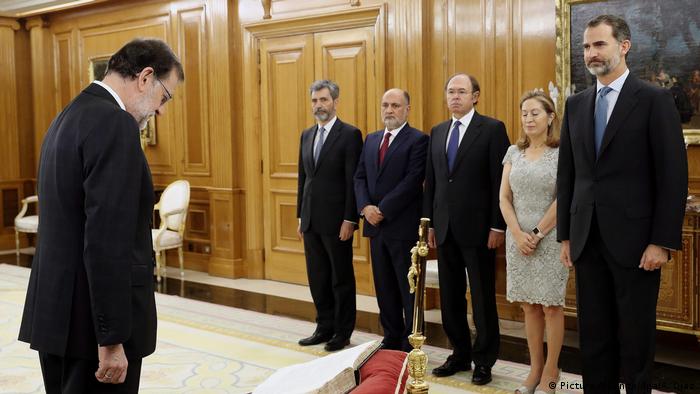 Spain's King Felipe presided over Rajoy's swearing-in ceremony at the royal palace in Madrid on Monday.

The formalities mean that Rajoy can formally begin his second term in office, after assuming the role of acting prime minister for more than 10 months when the country was left in political limbo by two inconclusive elections.

Although Rajoy's People's Party (PP) won both the December and June ballots, it failed to retain its parliamentary majority, which led to months of political jockeying, with the Socialist (PSOE) party and ultra-left wing Podemos parties refusing to govern with Rajoy.

Mariano Rajoy will serve a second term as prime minister, although it will be at the head of a minority government. Rajoy won a confidence vote thanks to the opposition Socialist Party's decision to abstain.​ (29.10.2016)

Spanish impasse over, but Socialists in turmoil

PSOE’s internal and external tensions won’t go away with the end of the deadlock. Dissident MPs and left-wing competition herald a difficult period for the Socialists. Santiago Sáez reports from Madrid. (24.10.2016)

The leader of the center-right People's Party has vowed to put aside differences to form a new government. The king's mandate marks a likely end to more than 10 months of political deadlock. (25.10.2016)

However, PSOE agreed to abstain in a parliamentary confidence vote on Saturday, which allowed the conservative leader to win enough support to form a government.

But the 61-year-old will still head a minority administration that could have difficulty passing laws in parliament.

Analysts predict Rajoy can expect an unprecedented opposition to additional economic reforms that his government plans to pass during its second term in power.

His first challenge will be to pass a 2017 budget that must find some 5.5 billion euros ($6 billion) in cuts or tax hikes to meet a deficit target agreed with European Union authorities.

But with Spain having the EU's second highest unemployment rate and an economy that is still struggling following the 2007/8 financial crisis, any wrong move could jeopardize business investment or be opposed by left-wing parties.

His best hope would be to appeal to parliament's 32 centrist Ciudadanos MPs, analysts said.

As well as the economy, the issue of independence for Spain's wealthy northeastern region of Catalonia remains a threat.

The independence movement has gathered pace since Rajoy first came to power in 2011, and Catalan regional president Carles Puigdemont has vowed to press ahead with an independence referendum next year if Madrid refuses to negotiate.

Rajoy is expected to name his Cabinet on Thursday.