The pro-Europe grassroots movements aimed at saving the EU | Europe | News and current affairs from around the continent | DW | 01.04.2017

The pro-Europe grassroots movements aimed at saving the EU

Hashtags, blue and yellow balloons, manifestos: Thousands of people are celebrating Europe, online and on the streets. Pulse of Europe is getting lots of attention, but it's not the only such movement. DW takes a look. 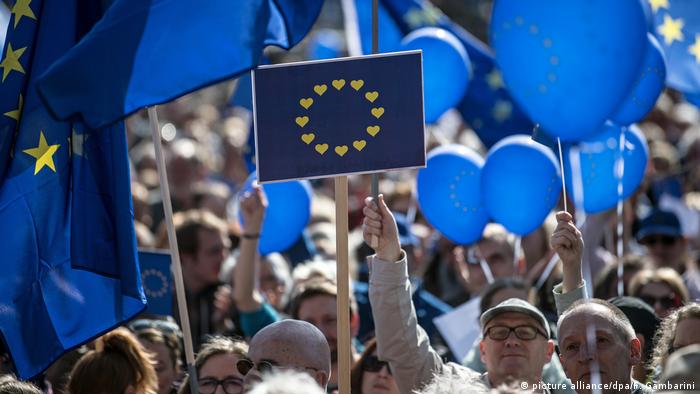 A sea of blue and yellow in public spaces across Europe: Almost every weekend, supporters of the German initiative Pulse of Europe demonstrate in European cities - and they are growing in number. A few months after its founding, the movement now has 15,000 followers on Twitter, and almost 74,000 Facebook fans. Unlike other initiatives, what it doesn't have are concrete political demands. But who are the others, and what do they all want?

On an evening in February 2016, Yanis Varoufakis, motorcycle fan and former enfant terrible of Greek politics, stood in a darkened Berlin theater and spoke about saving Europe. One by one, he was joined on stage by prominent supporters, including Left party leader Katja Kipping. Julian Assange joined in via video link, as did star philosopher Slavoj Žižek and Barcelona's Mayor Ada Colau.

"Europe has to become more democratic, or it will fall apart," said Varoufakis that night. It was the birth of Democracy in Europe Movement 2025 (DiEM25). The group now says it has some 60,000 members and more than 100 local activist groups in 56 countries. The website is available in nine languages, the manifesto in 19. Since its inception, DiEM25 has started campaigns for more transparency at EU institutions and against the EU's migrant deal with Turkey, and it has issued a 100-page paper with ideas for a "European New Deal."

Croatian philosopher and DiEM25 co-founder Srećko Horvat is happy. "In Germany alone, we have members in almost every city, from Frankfurt to Heidelberg, from Berlin to Munich," he said. "These groups take part in the protests against TTIP; they provide solidarity help for refugees, like in Barcelona; they organize so-called democratic salons all over Europe where they have discussions on topics that are connected to the European crisis and the way out."

Although DiEM25 sees itself as a grassroots movement, it does have a hierarchy as well as congresses attended by celebrities such as Noam Chomsky and Vivienne Westwood. The initiative also maintains close contact with leftist parties across Europe - for Horvat, no contradiction. "What DiEM25 is trying to do, and this is something radically new, is to build a hybrid movement. We believe that we can only be effective by combining the energy and activism of our volunteers with some sort of verticality, for instance economic experts developing the European New Deal and the Coordinating Collective leading the way towards its implementation," he said.

He said that while he's happy to see lots of people demonstrating in favor of Europe, that's not enough. "I think protests are important on a symbolical level, but we have to aim for much more. The real question isn't: How many people will gather to a protest? The real question is: What do you do after the protest is over? If your life goes on as usual the next day as if the protest never happened, what is the meaning of it?"

In May, DiEM25 will be back where it all began, at Berlin's Volksbühne theater, to present its plans for the next two years.

"The day after the Brexit vote, I felt really bad," said Katja Sinko. "I drove up to the Baltic Sea in order to clear my head. For me, it was just terrible that something I find so important is suddenly being questioned." The 27-year-old is a European through and through: Erasmus, a job in Brussels, and now European Studies in Frankfurt (Oder) in eastern Germany. Since the start of the year, though, she's had little time for her studies. In January, Sinko and a group of other EU fans started a campaign called The European Moment. "Politically, 2016 was a crappy year," said Sinko. "There was some outrage, but then it seemed like nothing else was happening. I think 2017 will be the year that lots of people say, I have to do something!" 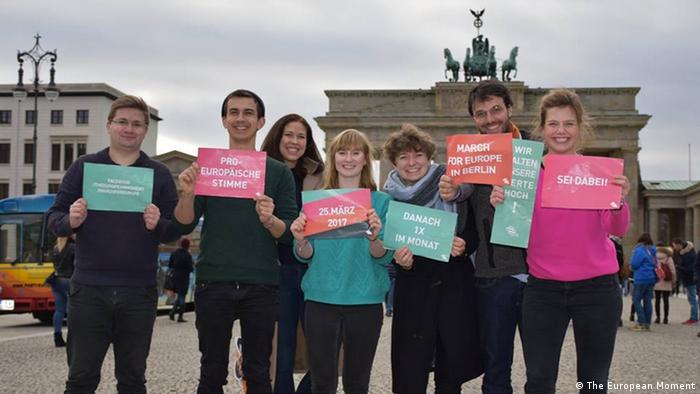 The European Moment: "We're going to save Europe"

With its trendy-looking website, complete with a countdown timer until the next demo and messages like "Sorry! We're a little late, but now we're going to save Europe," the movement hopes to appeal to young people. Behind the self-mockery hides a serious purpose. "My generation inherited the achievements of the EU; we didn't have to work for them. I feel like it's now up to us to defend them and to shape the Europe of the future," said Sinko.

For her, Pulse of Europe doesn't go far enough. "It's not enough to wave little EU flags. We want a changed Europe." That means dealing with the current deficit, and demanding more solidarity. "When I think about the fact that every second Spanish person under the age of 25 is jobless, it breaks my European heart. It's just not fair," she said. The European Moment is calling for fair economic and social policies and ambitious EU-wide commitment to fighting climate change. The movement also aims to bring together various pro-European initiatives. Going forward, it plans to hold a pro-EU demonstration in Berlin once a month. The first is set for April 29.

Stand Up For Europe

Bundling resources, and bringing different initiatives to one table - that's also the goal of the Belgian Stand Up For Europe movement. The pro-European scene is very fragmented, says its president, Richard Laub. "Everyone wants to hang onto their little baby," he said. "Our goal is to bring everyone together. We're in contact with Pulse of Europe and lots of other associations and we want to collaborate with them to build a critical mass that can truly have an impact." 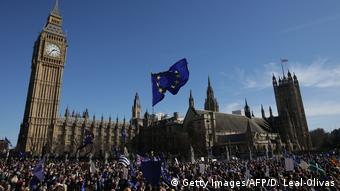 The Brexit has galvanized pro-EU elements

Like DiEM25, Stand Up For Europe has an ambitious concept: greater European integration, more direct democracy, more solidarity. Among its concrete demands are a European constitution and a European intelligence service. The initiative is organized into local city teams and is represented at universities across Europe. Members regularly contribute articles to the Belgian press, a practice that activists want to expand to other countries. But it reaches most supporters via social networks. Its in-house social media team comprises 25 people. It has 80,000 Facebook fans, some of whom have even formed their own city and university teams. It hopes to crack the million mark within a year. "With a million Facebook fans, we will be reaching 20 million people a week," said Laub. Stand Up For Europe has plenty of future plans: a Europe-wide citizens' initiative on migration, an art project involving famous artists from different EU states, and a European youth day.

Laub is also of the view that demonstrations alone don't have much of an effect. "It's extremely difficult to maintain momentum if all you do is ask people to take to the streets every Sunday."

As Britain prepares to start its formal divorce from the EU, pro-European demonstrators have gathered in London. The rally went ahead amid tight security following Wednesday's deadly terror attack on Westminster. (25.03.2017)