The link between India′s biometric identity scheme and starvation | Asia | An in-depth look at news from across the continent | DW | 26.03.2021

The link between India's biometric identity scheme and starvation

The Indian government's biometric identity scheme has drawn criticism for many reasons, but new reports suggest the plan is causing deaths by starvation and increased hunger across the country. 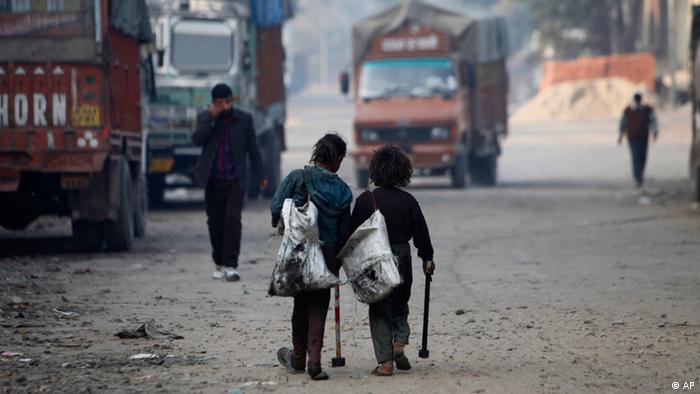 In 2017, Koili Devi — a Dalit woman from the eastern Indian state of Jharkhand — lost her 11-year-old daughter to what she claims was starvation. Local authorities say she died of malaria.

Devi claimed she could not feed her daughter because she failed to link her food rationing card to Aadhaar — the government's biometric identity scheme — through an official website.

Devi's food rationing card was among some 30 million official documents that were canceled across India between 2013 and 2016. The government had set a deadline for people to link their cards to Aadhaar, after which a blanket cancellation was carried out on the assumption that those cards were fake.

Devi says that many other people lost their food rationing cards because they could not connect them to Aadhaar. As a result of this, they were denied food rations.

Last week, the Supreme Court called the cancellation of rationing cards a "serious matter" and issued notice to the central government, seeking a response to the allegations.

"Koili Devi's case is not an isolated one; there are tens of thousands of such cases in the country. In at least 10-15 states, people have died of starvation," Colin Gonsalves, a lawyer representing Devi, told DW.

"If you are canceling a person's entitlement, the law says that you give them notice. The authorities should tell them that they have reason to believe that their card is bogus and that they will come to their house to check it. But they didn't do it," said Gonsalves, who is also the founder of the Human Rights Law Network, the organization that helped file Devi's petition in the court.

In 2013, India passed the National Food Security Act (NFSA), which guarantees provisions such as the mid-day meal — a school meal program — and the Public Distribution System (PDS), which provides food and non-food items to the poor at subsidized rates. Rights activists say that linking it to the biometric identity scheme is resulting in food insecurity in the country.

"The government is trying to prove that Aadhaar has enabled it to cancel bogus food rationing cards. Some of these cards belong to people who actually need them," Jean Dreze, a developmental economist and activist, told DW.

Experts say that many of these canceled cards belonged to people from marginalized communities, including "lower castes" and tribal communities living in rural and remote areas of the country.

Dreze says that although there are multiple reasons why many people were not able to link their rationing cards to Aadhaar, the main problem is that the biometric technology is not reliable.

"Linking cards to Aadhaar is one problem; other problems include biometric authentication, which sometimes fails," he added.

If a person is unable to authenticate themselves using the biometric scheme, the dealer from the PDS is bound to give them food rations and put their names on an exemption register, explains Dreze. "But the problem is that dealers are only getting as much grain as they can distribute, in accordance with the Aadhaar-generated records," he added.

P Sainath, a journalist, has documented several instances in which biometric failure, such as nonfunctioning of the fingerprint, has denied people access to basic services.

Activists say that a simpler technology like smartcards, which do not depend on biometrics or the internet, would be more appropriate for rural areas.

The government continues to deny that many people are dying of hunger in the country. Dreze says the situation is quite disturbing.

"We know from the National Sample Survey and other sources that it is not uncommon in India for people to go without two square meals a day. Deaths by starvation are well-documented; many cases have been thoroughly investigated," the expert said.

"Hunger is a national issue, but unfortunately the central government is not addressing it," Dreze added.

Parshottam Rupala, the union minister of state for agriculture, told parliament last week that hunger reports by NGOs should be discarded because "even stray dogs are fed" in the country. Rupala was reacting to a report that ranked India 94th among 107 nations in the 2020 Global Hunger Index.

Journalist Sainath says the hunger problem can only be addressed through state intervention. "It is the duty and responsibility of states to address this issue," he said.

"In the 1980s, the mid-day meal scheme was introduced in Tamil Nadu state. Many people were skeptical of it, but the scheme eventually became successful and even UNICEF used it as a model," Sainath said.

Activist Dreze believes there is a need to do more than just launching symbolic programs.

"The central government has launched symbolic schemes with a meager budget. They are meaningless. We cannot address a serious issue like this with symbolic measures," he stressed.