For the first time since the Nazi era, there's a Jewish Carnival club: the Kölsche Kippa Köpp. Its aim: to show that they are an integral part of the local Carnival traditions. 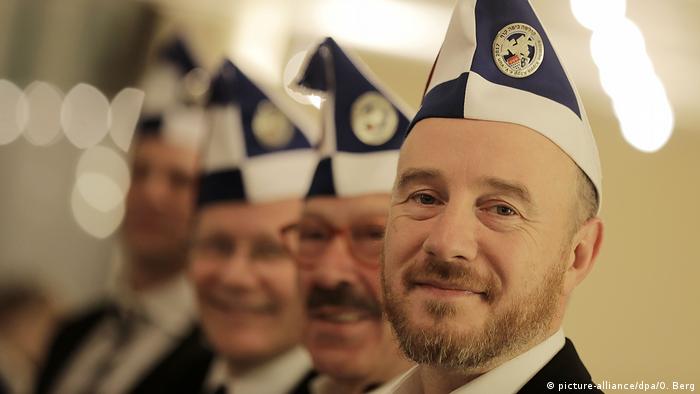 In Germany's Carnival strongholds, people of all ages and of all backgrounds celebrate together wearing colorful costumes: young and old, locals and newcomers, Christians, Muslims — as well as Jews.

There are currently an estimated 200,000 Jews living in Germany today, but apart from news stories related to anti-Semitic attacks or Holocaust remembrance, little attention is given to their participation in different fields of social life — including Carnival.

That's where Aaron Knappstein, with his Carnival organization Kölsche Kippa Köpp (Cologne Yarmulke Heads), comes into play: "We want to show that there is a very lively Jewish community in Cologne today. We are a group of people who simply love to celebrate Carnival."

Even before Kölsche Kippa Köpp was founded by Knappstein, who is also the president of the Jewish Association, its members were active in other Cologne Carnival clubs. That's how the president of the festival committee, Christoph Kuckelkorn, came up with the idea of creating a new club specifically for those who are Jewish.

It took some time before Knappstein and his 11 colleagues finally joined forces to form the Kölsche Kippa Köpp association, but they finally decided to do so in 2017. 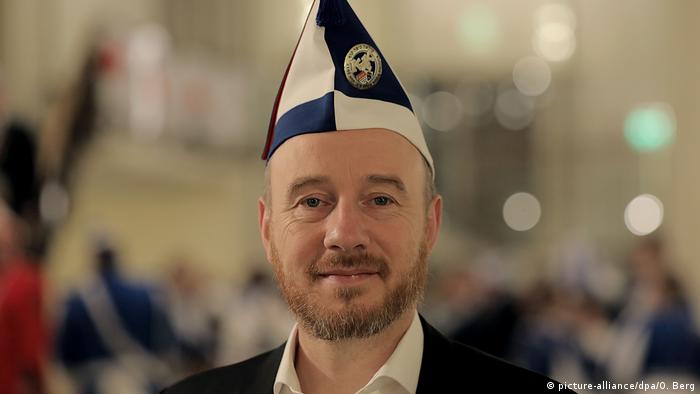 In the 1920s up until the early 1930s, there had already been a Jewish Carnival club in Cologne: the Kleiner Kölner Klub (Small Cologne Club). Kölsche Kippa Köpp wanted to commemorate their forerunners, which is why their name also has three Ks as initials, like the former Jewish association. "It was important to us to remember that Jews have always been part of the Cologne carnival," explained the 48-year-old Knappstein. Yet the group likewise tries to avoid using the initials, which also refer to an infamous anti-Semitic group based in the US.

There were already Jewish Carnival-goers in the early 19th century, according to historian Marcus Leifeld. They played important roles in the preparation of the festivities, such as creating Carnival floats or writing and performing plays. Among them were songwriter Hans David Tobar and Carnival speaker Gertie Ranshoff.

With the economic crisis at the beginning of the 1920s, Jews were used as scapegoats and accused of causing many of the Weimar Republic's problems.

That's when peaceful celebrations between Jews and non-Jews during Carnival began to crumble. The first anti-Semitic Carnival songs and speeches were heard by around 1922. Associations started arguing if they should keep accepting Jews in their club or tolerate them as passive members. Some decided to exclude them completely. 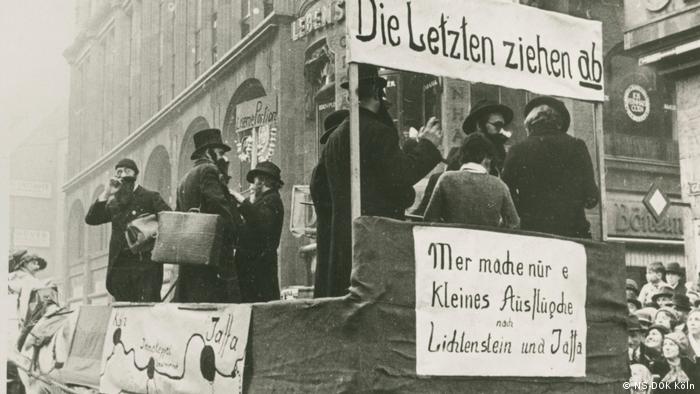 One of the first anti-Semitic Carnival floats in Cologne, in 1934

So it is certainly no coincidence that the first Jewish Carnival association, the Kleiner Kölner Klub, was also founded at that time. According to Leifeld, the KKK of the 1920s — just like the Köklsche Kippa Köpp today — was probably the only Jewish Carnival club in the world.

The members of the 1920s Kleiner Kölner Klub, founded by brothers Willi and Max Solomon, were mainly Jewish textile merchants.

They organized every year at least one costumed event, to which the Rote Funken, one of the oldest Carnival clubs in Cologne, and the Carnival's "Triumvirate" of highest representatives — the Prince, Farmer and Virgin — were all invited. So it wasn't a "Jewish Carnival" but rather Jews who celebrated the Cologne Carnival like everyone else.

The Kleiner Kölner Klub ended abruptly with the rise of the Nazis. Willi and Max Salomon fled to Palestine and the US; other members were deported and murdered.

The last documented activities of the Kleiner Kölner Klub date back to the 1930 Carnival session, Marcus Leifeld told DW. It is unclear whether the association continued to exist afterwards. 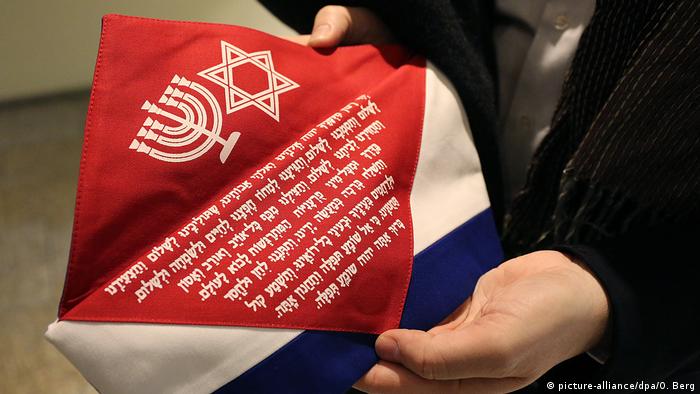 The inside of the caps of the Kölsche Kippa Köpp members depict the Star of David, the menorah and a Hebrew prayer

Conscious participation instead of segregation

Now, some 90 years later, Aaron Knappstein and his Kölsch Kippa Köpp associates want to demonstrate that Jews are active Carnival participants. Their goal is not to isolate themselves from other Carnival-goers but rather to establish the normalcy of their presence.

Everyone is therefore welcome to the club; Kölsch Kippa Köpp has recently received 30 new applications — Jews and non-Jews, men and women.

"When we make an appearance as a club and organize a session, or when we join the table of associations as a new member," explains Knappstein, "Then people see that we are sitting around the same table and drinking Köslch beer just like the other Carnival clubs. And that is simply normal."

As the carnival season opens in western Germany, tens of thousands of residents take to the streets to party. The season of beer, colorful costumes and silliness is set to last until Ash Wednesday in March next year. (11.11.2018)

The world celebrates Carnival over five days in February. A few German carnival strongholds actually get an early start at it, on 11/11 every year. Here are 11 unusual and colorful Rhineland traditions. (12.02.2018)