Richard von Weizsäcker, the German president from 1984 to 1994, had a gargantuan task: the reunification of Europe. After his death on Saturday, Germany's eastern neighbor Poland was also mourning the former leader. 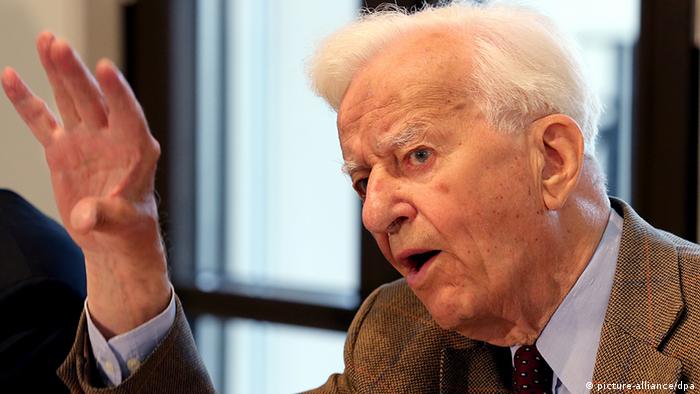 DW: How was President Weizsäcker's death received today in Poland?

Rafal Kiepuszewski: Polish media said right away that Weizsäcker is the greatest German friend that Poland has ever had. The most widely circulated daily, Gazeta Wyborcza, has just published on its website, "He categorically rejected fascism."

"All his life, he tried to right the wrongs committed by his compatriots against his neighboring nations."

We have to remember here that Weizsäcker is the son of a well-known Nazi. And yet, Polish leaders commend him for his rejection of his past. Wladyslaw Bartoszewski, adviser to the current Polish president, and known as one of the architects of Polish-German reconciliation after the fall of communism, said today: "It was significant that Weizsäcker went from someone we could have met on the opposite side of combat to being one of the greatest supporters of Polish-German rapprochement."

Was Weizsäcker, given the horrors that preceded him, then perhaps a catalyst in the metamorphosis of German-Polish relations?

It was perhaps the most evident from the '50s and '60s; Weizsäcker encouraged German politicians to recognize the postwar German-Polish border, which previously had been a contentious issue … Generally, from what Polish media are saying today, Weizsäcker was aware that although Germany and Poland were very close geographically, the two nations didn't know too much about each others' histories, and that compounded the shadow that had been cast by World War II. And Weizsäcker was aware of this, and his generation had a burden to bear, and he did his utmost to lead Germans in the direction of understanding with Poland. 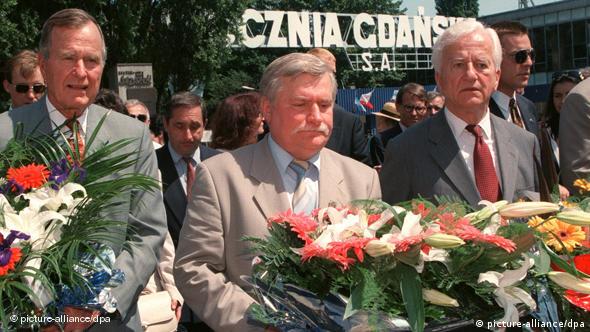 Along with former presidents George Bush (left) and Lech Walesa, Weizsäcker paid tribute at the Monument to the Fallen Shipyard Workers in 1997

In 1985, Weizsäcker gave a very significant speech in which he acknowledged the guilt of Germans with regard to the atrocities that were committed during World War II. What symbol did that speech send to the Polish people?

That was a very important time to be saying those things. In Russia, perestroika was already under way. Polish leaders were actively looking for a way out of the Soviet deadlock. Although Poland was still technically under the grips of communism, and there was a lot of hardship that ordinary Poles had to endure - also the media wasn't free to report everything - [but] the signal that was sent out then didn't fall on deaf ears. Active contacts started out. We weren't in direct contact with Germans at the time. But it must have proved very reassuring to the Polish opposition at the time. The opposition was of course very strongly in touch with Western political circles, notably Germany. In essence, that did mark a watershed moment in terms of Polish-German relations.

It was Chancellor Willy Brandt who fell to his knees at Auschwitz in perhaps the most iconic moment in Polish-German reconciliation history. Does Weizsäcker have a similarly lasting impression on Polish-German relations?

He does, actually. He visited Poland for the first time in 1990, following the fall of the Berlin Wall. He came to Poland to lay flowers at the Westerplatte monument, which was the Polish outpost of the then free city of Gdansk. It was perhaps the beginning of World War II. Weizsäcker attended the ceremony in 1990, and he said very strongly afterwards that this was the most important visit of his career. This is still remembered in Poland. Polish media, today, still carry this information. During that ceremony, he also made a point to stress that the Polish-German border was inviolable. That, again, was a very strong signal.

Richard von Weizsäcker has passed away, aged 94. The sixth president of the Federal Republic of Germany was the country's highest-ranking representative from 1984 to 1994. DW takes a look back at his tenure. (31.01.2015)

German leaders have united in mourning former President Richard von Weizsäcker, who has died at the age of 94 in Berlin. Weizsäcker's stint as head of state saw the fall of the Berlin Wall and German reunification. (31.01.2015)

Richard von Weizsäcker, who was West German, then German president from 1984 to 1994, has died at the age of 94. He was internationally respected as an integrative figure in German politics. (31.01.2015)

How important was Weizsäcker, with regard to the future of Europe, for the reunification of West and East?

There wouldn't have been a complete change on the map of Europe without people like Weizsäcker. They were behind the scenes for decades, step by step, and they tried to make the German people more aware of Eastern Europe, more aware of the fact that it wasn't just an Iron Curtain that was just the end of world for them, that there were countries beyond that were important - also strategically - for the future of Europe.

The role of people like Weizsäcker is very fondly remembered here in Eastern Europe. You have to bear in mind that there was a lot of ill feeling with regard to Germany, not just in Poland but also in other countries in Eastern Europe, after what happened during World War II. A lot. But from that, it went to full understanding between not just the elites and corporations on the European level. Real economic development followed. All of this wouldn't have been possible without Weizsäcker's political role.

But he didn't stop there. Even after he was no longer president, he still was very active in trying to improve Polish-German relations, as well as Germany's relations with other Eastern European states. Today, on the day of his death, Polish media have confirmed in resounding fashion that Weizsäcker was instrumental in working behind the scenes to restore relations to a pragmatic level. And that indeed happened.