The German savers who must pay interest to their own bank | Germany| News and in-depth reporting from Berlin and beyond | DW | 19.03.2017

The German savers who must pay interest to their own bank

Negative interest rates were originally just for businesses, but now private individuals are paying the price. One of Germany's major banks has decided its wealthy customers will lose money on savings accounts. 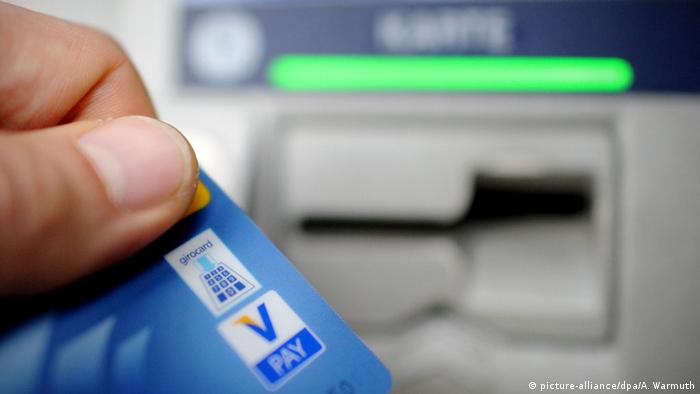 Many Germans are still wary about buying shares despite an environment where saving money doesn't seem to make much sense because of continuously low interest rates.

The European Central Bank (ECB) has done everything in its power to fuel inflation and boost economic growth, but has had limited success. Now, risks and side effects are becoming more evident. (02.12.2016)

Will cash soon be a thing of the past?

More and more countries are phasing out large denomination bills - but few people are aware of the reasons for limiting cash transactions. (18.12.2016)

Germany's biggest private lender has sold its British insurance business to raise urgently needed cash to pay looming penalties for its past misdeeds and to fight speculation of requiring state aid to stay afloat. (28.09.2016)

Wealthy customers at a major German bank will earn negative interest rates on their deposits, the bank announced this week.

Sparkasse Köln-Bonn was the latest in a series of major German institutions to pass on to its private customers the European Central Bank's negative interest rates.

Most financial institutions had only required business customers to suffer the negative interest rates, not private account holders.

In March 2016, the ECB set depositary rates at -0.4 percent to help battle deflation in European countries, hoping to push banks' excess cash into the economy. It first entered negative territory when it set the rate at -0.1 percent in June 2014.

At the time, ECB President Mario Draghi said the measure was exclusively about the banks. "The interest rates we have changed are for banks, not for the people," the German newspaper Frankfurter Allgemeine Zeitung reported.

The savings bank Sparkasse runs in a decentralized structure with nearly 400 banks worth a total of about 1 trillion euros (US$1.1 trillion). Köln-Bonn is the second-largest Sparkasse with about 900,000 private customers.

Financial newspaper "Handelsblatt" reported that the negative interest rates would apply to those with an account balance of at least three million euros.

Hamburger Sparkasse, the biggest Sparkasse in Germany, was reportedly in discussions with its wealthy customers to impose negative rates.

Negative interest rates cost banks dearly since they were introduced. Sparkasse Köln-Bonn estimated it cost them between 30 to 40 million euros, and 560 million euros for all Sparkassen together.

Two of Germany's large private banks, Commerzbank and Deutsche Bank, assured "Frankfurter Allgemeine" that they had no plans to impose negative interest rates on their private customers.

Read: Will cash soon be a thing of the past?