The fascinating rhythm of the Rainforest

Sarawak, the land of the hornbill, the headhunter and the orang utan, is also the land of the Rainforest World Music Festival. Bands and indigenous musicians from around the world gather here every year in July. Pingasan'K (Malaysia) at the Rainforest World Music Festival in Sarawak

Unlike so many music festivals which squeeze visitors into industrial concert venues, the Rainforest World Music Festival allows music lovers to enjoy its loud rhythms in the heart of the one of the world's oldest rain forests of the Malaysian Borneo jungle: in the Sarawak Cultural Village, a living museum showcasing the heritage and history of the Iban, Bidayuh, Orang Ulu, Penan and other ethnic groups. 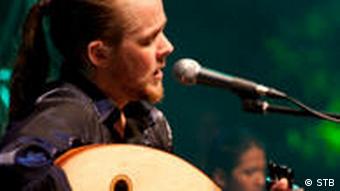 Debu (Indonesia) performing on the first day of the festival

from a variety of daytime workshops and interactive ethnomusicology lectures in the afternoon, where performing artists of similar instruments or interests are brought together to demonstrate their craft and find a common musical voice. "The instruments that we have here are mostly made of wood and bamboo," an official at the Dewan Lagenda said. "The material used comes from the jungle. That is what the Rainforest Festival is all about. We make use of what we have in our jungle to make instruments. The instrument that I have with us now is called pratuon’k".

The workshops are the real heart of the Rainforest World Music Festival. Held at locations like the Iban Longhouse or the Dewan Lagenda, visitors sit next to each other, legs folded or outstretched, on floors made from strips of wood. The enthusiasm is contagious and before long the crowd is drawn into the musicians’ passionate performances, clapping along to their soulful rhythms and vibrant beats.

Today, the legendary former headhunters of Malaysian Borneo live peaceful agrarian lives, but they still like playing the traditional tunes they did when the headhunters returned with the head of the enemy.

The 13th Rainforest World Music Festival held this month featured 20 performers from countries as diverse as China, Indonesia, Bulgaria, Canada, France and Portugal and attracting around 20,000 spectators from around the globe. Austrian nanophysicist Ille Gebeshuber was one of them. "I am a university professor of Physics at the University Kebangsaan Malaysia. Once I was at a bookstore and I saw a book about the 501 things that should be done before you die, and one of those things is to visit the Rainforest Word Music Festival".

For the musicians, the festival recognized by UNESCO represents a unique opportunity to come into contact with new instruments and techniques, explains Clemont Bazin from the French band Minuit Guibolles. "The first thing that amazed me when I arrived here was the variety of instruments that I discovered - that I think everybody is discovering - especially during the workshops, because you can see everything from Chinese or Japanese bongos to the steel pan. There is really a variety of traditional instruments".

After the workshops, the heavens opened up. Thunder and heavy rain accompanied most of the evening performances. But what is a rain forest music festival without some rain?

The grand finale featured all 20 bands together on stage, each performing about a minute of their music and then jamming all together. Memories of the three-day world music extravaganza blurred and came together, and the audience was determined to be back again for the next Rainforest World Music Festival.

Wynton Marsalis gets the Berlin Phil to swing

Jazz is dance music, says start trumpeter and composer Wynton Marsalis, and that's what he brought to Berlin with his freshly premiered "Swing Symphony," commissioned by the Berlin Philharmonic. (11.06.2010)

The German Echo Awards, like the Grammys, are among the world's most prestigious music prizes. On May 5, the first-ever Echo for jazz is awarded to the Vijay Iyer Trio from New York. (05.05.2010)

Your favorite band might just show up at your door very soon. The Live in Your Living Room project started in the Netherlands and is now out to get top musicians performing in homes all over the world. (30.10.2009)