Wynton Marsalis gets the Berlin Phil to swing

Jazz is dance music, says start trumpeter and composer Wynton Marsalis, and that's what he brought to Berlin with his freshly premiered "Swing Symphony," commissioned by the Berlin Philharmonic.

Equally at home in both the classical and jazz genres, Wynton Marsalis is one of the most renowned trumpeters and composers of our time. He is the artistic director of Jazz at Lincoln Center in New York City.

The Berliner Philharmoniker commissioned Marsalis to compose a "Swing Symphony" for them to play together with his Jazz at Lincoln Center Orchestra. The unique work premiered this week in Berlin, where Deutsche Welle's Laurie Schwartz was among the journalists who met up with Wynton Marsalis.

Deutsche Welle: What was the main challenge for you in writing the "Swing Symphony" - in uniting the classical orchestra with the jazz orchestra in this project?

Wynton Marsalis: The challenge is one of time. We play within the time a different way. We play a different style of music and it's always a challenge. And also, the orchestration is very difficult - it's a skill.

And there's the time element that comes from being and playing different cultural musics. We, the Jazz at Lincoln Center Orchestra, have played with many different musicians from other cultures - we did something with a group from Ghana, "Yacub Addy." It was very difficult for us to understand how to play with them because we don't listen to African music all the time. We get lost in the time. So, we had to figure out over a few years how can we play with these musicians. 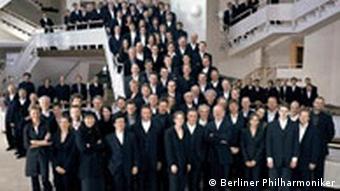 The Berliner Philharmoniker have the potential to swing, says Marsalis

Does the Berliner Philharmoniker "swing"?

Um, I think that there's the possibility of the Berlin orchestra swinging, but they don't swing in the style of jazz. With the way they play, like the way we heard them playing in "Petrushka" [Ballet Suites by Igor Stravinsky] and the way they play the music that they play, they're an unbelievable ensemble. And we have as much respect as you could possibly have for a group of musicians for them.

We are great fans of the orchestra and we are instrumentalists so we understand. And as musicians, we all practice the same material. If you're a jazz musician, you play in the same books classical musicians play in. So we have a common ground and there's a tremendously great deal of mutual respect.

Are there other orchestras that could play this music or is the Berliner Philharmoniker unique?

The Berliner Philharmoniker is a unique orchestra. There are other great orchestras.

I don't find the need to say there's only one great orchestra, only one great trumpet player. There are many, you know we are human beings, there are people who have talent everywhere. But it's more difficult to find a great group of people than a great person, because groups generally come together and - it's like a family, you know - bad behavior many times can become the agenda. But this orchestra has a very unique personality, of the many orchestras I've played with.

You occupy a particular position in what you represent for jazz. You are quoted in the program notes to your piece saying, "Jazz is dance music, if it doesn't sound good, people won't want to dance to it. And if you can't dance to it, then it's not jazz." This excludes a lot of music - a lot of jazz - that happened after the 1960's. What is your particular take on that?

My feeling about that is that music can be improvised and not be jazz. It can be very good music and not be jazz. A person can pick up a horn and play unbelievable improvised music that's wonderful music. Jazz music has swing as its basis. When you stop swinging, you're playing another form of music, which is okay. There's nothing wrong with choosing to play other styles of music. I play different styles of music.

That does not mean that a person who is a jazz musician can only play jazz. They can play whatever they want to play, and they do. But at a certain point, it's something that ceases to be lemonade and becomes water with lemon in it. We would never come to an understanding of what that point was. We could argue that forever. But I could give you a glass, you say, "Okay, it's some water with lemon in it." Or you say, "Wow, this is lemonade." But if I start testing it and say is it 35 percent lemon or is it 50 percent - we could go on and on because the conversation takes precedence over the fact.

Do you consider yourself a classicist? It's seems to be more of a classical position on jazz that allows you to actually bridge this gap with the symphonic form.

No. I don't consider myself that. I consider myself a realist. Terminology can be very confusing because "theory speak" can consume a lot more space than the actuality of some art. 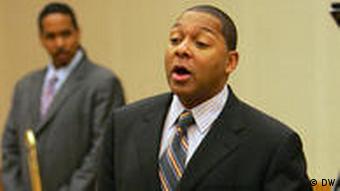 I mean, my thing is on the bandstand. I've played a lot of different kinds of music with many different musicians - from Ornette Coleman to Sweets Edison to Danny Barker. So I feel like my understanding of music is experiential. It didn't come from school, it came from bandstands.

There's been a tremendous investment - theoretical investment - in the breakdown of jazz. And part of my mandate when I came out here was to rectify a lot of that [breakdown of jazz]. That caused a lot of hurt feelings and anger. My feeling is: so what? That is my mandate and I live up to it. Now, I'm 48 years old; I started when I was 20. I remain in that position. And I remain able and willing to present that point of view. It's not a "classicist" point of view; it is a realistic point of view. And it's based on being on bandstands and playing a lot of music.

You have a very lively educational program going on at Lincoln Center and one thing you've spoken about is music being "a model for life." Could you say a few words about that?

The main thing you try to teach kids is how to find themselves and be proud and happy to be themselves - whatever it is that they choose to do. And play or not play - if you have short hair, if you have a big nose, if you have some trait that people might tease you about, there's nothing wrong with that. That's you. So in jazz, if you have a distinctive tone or something characteristic, we tell you to do that - celebrate it. You don't have to be like everybody else. Find your individuality.

Then, the second part of what we teach is that other people are okay, too. They have the same thing you have. And you co-create with them when you play jazz, so you're constantly in the position of having to find them. And providing the environment where you may not agree with them, but for y'all to work together, you have to find a common ground. And that common ground is the swing. And if y'all can't find that swing, you're not going to sound good.

The German Echo Awards, like the Grammys, are among the world's most prestigious music prizes. On May 5, the first-ever Echo for jazz is awarded to the Vijay Iyer Trio from New York. (05.05.2010)

With his talent and unconventional image, the English musician Nigel Kennedy manages to attract thousands of people to classical concerts. At the moment, he is busy entertaining his German fans. (30.04.2010)

Born one hundred years ago, manouche jazz legend Django Reinhardt is often considered the best jazz guitarist of all time. France is honoring the musician with concerts, special edition CDs and TV programs. (22.01.2010)