"The Einstein of pop music:" Bob Dylan at 75

As Bob Dylan's birthday is widely noted, music experts wonder whether there could ever be a worthy successor to him as poet, musician and cult figure.

He was once dubbed "the greatest singer without a voice" - but that hardly comes near to describing the phenomenon of Bob Dylan. Neither can he be labeled a folk and rock singer. Bob Dylan defies clichés, continuing to move outside categories even late in life.

Dylan refused to be an idol

The more things change, the more they stay the same. Dylan shocked his fans for the first time during the 1965 Newport Folk Festival. Just when music historians were dubbing him an idol of the folk, blues and protest movement, he stuck his guitar into an electronic amplifier and performed with a rock band. Seeing that as an act of treason against their folk music, his irritated fans booed. Until then, his career had been quite straightforward. Under his original name, Robert ("Bobby") Allen Zimmerman, the guitarist and pianist, born in a Jewish family in Duluth, Minnesota, started playing rock 'n' roll in high school bands in the mid-50s. As a student in Minneapolis in 1959, he discovered his love for the new movement in folk music, finding himself more interested in Woody Guthrie, songwriter tramp, and Pete Seeger, icon of US leftists, than in rock 'n' rollers Little Richard and Gene Vincent.

The young Bob Dylan ended up in the trendy New York district of Greenwich Village. Joan Baez, already famous, discovered him there and took him along on tour. Performing with her for big audiences, he established himself as a figure in the political protest movement with wild and furious songs like "Masters of War" and "A Hard Rain's A-Gonna Fall." 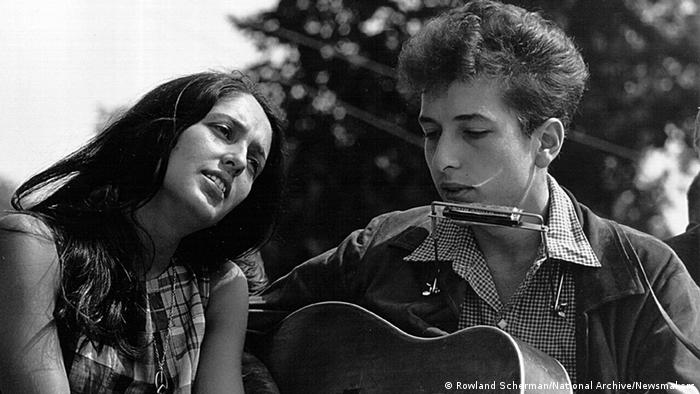 Joan Baez and Bob Dylan: two icons of the protest movement perform together

Dylan and Baez performed together at the March on Washington civil rights rally in 1963. Later, he broke free from his mentor. His influence in the protest scene grew so strong that it is felt today. "Newsweek" magazine describes Dylan as just as important to pop music as Einstein was to physics.

After a motorcycle accident in the summer of 1966, Dylan withdrew from the public, neglecting the counter culture he'd been so influential in shaping. Living with his wife Sara Lowndes and their children near Woodstock, New York, he was absent when the most decisive festival of the decade took place there in 1969 - even though like the Beatles and the Rolling Stones, he was considered one of the most important pioneers of rock and pop music. 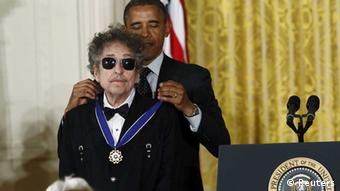 Obama personally bestowed the Medal of Freedom on Dylan

Dylan considered the hiatus a moment of liberation from his exhausting appointment schedule and the unhealthy lifestyle of a rock musician. The 70s brought difficult changes, including his separation from Sara Lowndes, artistic stagnation - and, towards the end of the decade, his turn towards Christianity, which some fans strongly disliked. Another rough patch came in the 80s, with rather unsuccessful records, alcohol problems and chaotic concerts. The commercial success of the all-star-band Traveling Wilburys and, in 1988, the beginning of his famous "Never Ending Tour" with 100 concerts a year ever since both marked a turn of fortune.

The list of Dylan's awards and distinctions is long: 11 Grammys, an Oscar for Best Music, the Pulitzer Prize for "lyrical compositions of extraordinary poetic power," - and the "Presidential Medal of Freedom," the highest civil award of the US, awarded by President Barack Obama in 2012. Dylan has also worked as an actor, for example in "Pat Garrett Hunts Billy the Kid" (1973). Having sold roughly 100 million records, chances are he doesn't mind the fact that Justin Bieber has sold more.

Bob Dylan has kept his datebook free on his 75th birthday, and his "Never Ending Tour" has come to a halt. Time for the artist to think about his role in music history? Plenty of others are doing that for him, including Sean Wilentz, a professor of history at Princeton University in the US and Dylan fan. Noting that in the 60s, Bob Dylan put ideas and feelings into words that other people could not, "It expressed what he wanted to express," says Wilentz, "but people caught onto it as an expression of what they were feeling, what they were thinking."

Who is the new Bob Dylan?

As Bob Dylan releases his new album "Fallen Angels," we explore a long-lasting media trend: proclaiming the "new Bob Dylan." These musicians have all been compared to the living legend - but some come closer than others. (20.05.2016)

There is a future for the classical art song, says the founder and director of the Lied Center in Heidelberg, Thorsten Schmidt. He told DW how the institution's goal is far more than preserving a historic music genre. (10.05.2016)

British producer and musician George Martin, who helped launch the Beatles and was behind countless hits over more than six decades, has died at the age of 90. "Music was pretty well my whole life," he once said. (09.03.2016)