British producer and musician George Martin, who helped launch the Beatles and was behind countless hits over more than six decades, has died at the age of 90. "Music was pretty well my whole life," he once said.

George Martin, the British record producer and musician responsible for more than 50 number one hit records and singles in the United States and UK over the last six decades, is best known for helping launch the Beatles to success. But his first impression of the band was mixed.

"As composers, they didn't rate. They hadn't shown me that they could write anything at all," he remembered later in an interview with "Melody Maker" magazine. But he added, "I liked them as people apart from anything else and I was convinced that we had the makings of a hit group."

Martin signed the Fab Four to the Parlophone record label in 1962 when all other labels had turned the group down, and ended up producing all but one of their albums. He shaped the band from the start, kicking out original drummer Pete Best and replacing him with Ringo Starr - though he relegated Starr to the tambourine on the band's first hit single, "Love Me Do."

Their collaborations led to some of the band's biggest hits, including "She Loves You," "I Want to Hold Your Hand," "Strawberry Fields Forever," and "Love Me Do" - the Beatles' first top 20 hit in the UK in 1962.

Martin's influence was invaluable. Though he found the lyrics to "She Loves You" corny, he suggested that the band begin the song with its well-known, upbeat chorus. It would later go on to become the biggest-selling single in British history, and was ranked number 64 on the "Rolling Stone" list of the 500 Greatest Songs of All Time. 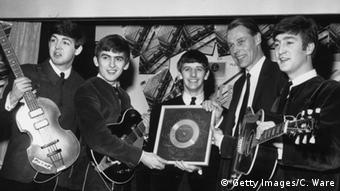 Martin was behind some of the Beatles' biggest hits

During another session recording of the single "Please, Please Me," Martin suggested they speed the song up. When the band had finished, he reportedly told them, "Gentlemen, you have just made your first number one record."

Martin was extensively involved in most of the music the Beatles recorded in the 1960s, leading to him often being named the "fifth Beatle." A classically trained musician, he also contributed some of the musical arrangements, including the striking string quartet passages in the songs "Eleanor Rigby" and "Yesterday."

He would also sometimes play along with the Beatles on their records. One of his contributions included the well-known instrumental solo near the end of "In My Life," from the 1965 album, "Rubber Soul." Though it sounds like a harpsichord, the sound was actually produced by an electric piano which was later sped up on tape.

Martin's death was mourned by many on Wednesday (09.03.2016), including British Prime Minister David Cameron.

On his blog, former Beatle Paul McCartney called Martin "a true gentleman and like a second father." He recalled Martin's advice to add a string quartet to "Yesterday," instead of having McCartney perform the song solo with his guitar.

"When we recorded the string quartet at Abbey Road, it was so thrilling to know his idea was so correct that I went round telling people about it for weeks," wrote McCartney.

Martin's interest in music began early. He taught himself to play piano from the age of six and formed his own band a decade later, "George Martin & the Four Tune Tellers." He went on to graduate from the Guildhall School of Music, studying composition, orchestration and performance on the oboe and piano.

"Music was pretty well my whole life," Martin wrote in his 1979 memoir, "All You Need is Ears." He began his career as a record producer at EMI's Parlophone label in 1950, after spending some time working for the BBC's classical music department. He was named head of the label in 1955, at the age of just 29, and worked with artists like Judy Garland and jazz stars Stan Getz, Cleo Laine and John Dankworth.

With the rise of the Beatles, the label's focus began to turn toward pop music. He would help the band develop their style, experimenting with sound and incorporating seldom-used instruments like strings and trumpets. Later, Martin would work with them to develop the psychedelic rock genre they were known for in the late 1960s, with hit albums like "Sgt. Pepper's Lonely Hearts Club Band" and "Yellow Submarine." 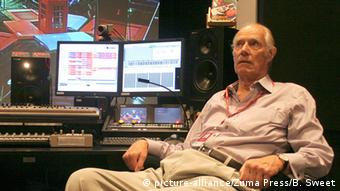 Martin carried on working well into his later years, producing for artists like Elton John and Celine Dion

"Once we got beyond the bubblegum stage, the early recordings, and they wanted to do something more adventurous, they were saying, 'What can you give us?'" Martin told The Associated Press in 2002. "And I said, 'I can give you anything you like.'"

Artistic differences led the band to split with Martin for the album "Let It Be," which was produced by Phil Spector. But they reunited with him for "Abbey Road," their last recording before the band officially broke up in 1970.

Life after the Beatles

Along with the Beatles, Martin also produced many other acts that defined the sound of the early and mid-1960s in the UK, including Cilla Black and Gerry and the Pacemakers. He went on to become one of the most in-demand producers in the world, working with a high-calibre list of artists that included Elton John, Celine Dion, Kenny Rogers, Jeff Beck, Bob Dylan, and Sting.

He also produced two top "James Bond" themes: "Goldfinger" by Shirley Bassey and "Live and Let Die" - the latter with Paul McCartney and his band Wings.

Martin continued to write music and work with music charities, producing and scoring Elton John's "Candle in the Wind '97," his tribute to Princess Diana at her funeral, and playing a prominent role at Queen Elizabeth II's Golden Jubilee concerts in 2002. He received a knighthood in 1996 and was inducted into the Rock and Roll Hall of Fame three years later.

DW has compiled a playlist dedicated to George Martin. Listen below for a retrospective of his work.

The British record producer and musician George Martin, who helped launched the Beatles on their way to world fame, has died aged 90. His career spanned more than six decades. (09.03.2016)

Until recently, songs by the Fab Four have only been legally available on physical media like CDs or as commercial downloads. But now Beatles songs are showing up on various streaming services. (23.12.2015)