The Biltmore Estate in North Carolina is proving that bigger is better when it comes to historic houses. The property now draws 1.7 million visitors a year. But the gilded mansion is only a part of its many attractions. 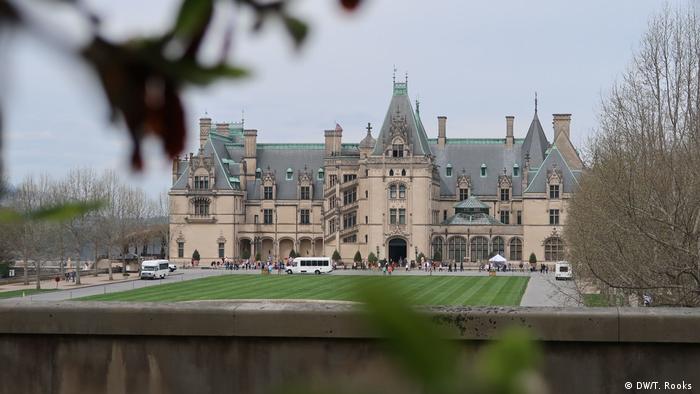 Seeing Biltmore House is a surreal experience. It is the biggest house ever built in America and dwarfs the rolling Blue Ridge Mountains that surround it. Built between 1889 and 1896 for George Washington Vanderbilt II, the Gilded Age anomaly is set in tiny Asheville, North Carolina. It is also a one-of-a-kind business, unlike any other on Earth.

Though the family stopped living in the mansion in the 1950s, it is still owned and run as a tourist attraction by the fourth generation of Vanderbilt descendants. The proportions are staggering: 250 rooms with all the original furniture, 35 bedrooms, 43 bathrooms, 65 fireplaces, two elevators, three kitchens, a banquet hall with a table that can seat 64 diners and an indoor pool — all this and much more inside its 175,000 square feet (16,250 square meters) of space. The local tax authority recently assessed it at $157 million (€140 million).

Over the years the house has served as a backdrop for many films like "The Swan" with Grace Kelly, "Richie Rich" with Macaulay Culkin, and "Being There" starring Peter Sellers and Shirley MacLaine. Even Prince Charles came for a visit. But it is the 1.7 million paying visitors in 2018 that make the property one of the biggest businesses in western North Carolina. 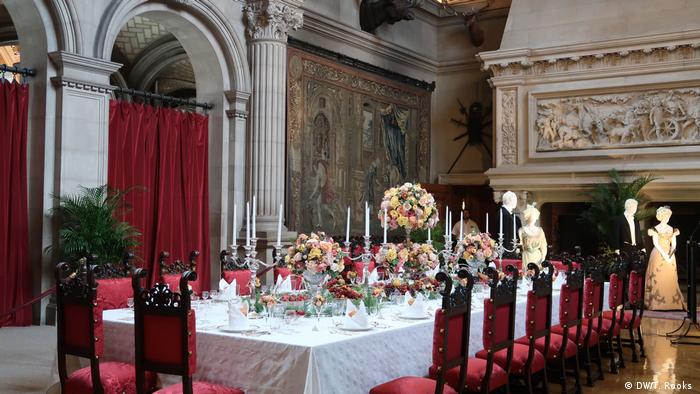 The massive dining room at Biltmore. Here the table is set for 18, but it can be extended to seat 64 people

The estate is much more than its big French chateau-like house. The surrounding property was always meant to be self-sustaining and today its remaining 8,000 acres are doing just that. First opened to the public in 1930, the property has 75 acres (30 hectares) of formal gardens created by America's premier gardener Frederick Law Olmsted, 100 buildings, 80 structures — garages, a dozen barns, greenhouses, stables, cottages, sheds, offices — and 40 bridges.

When the estate was new it was 125,000 acres and had just over 400 employees. In 1986, though the property was much reduced in size, the New York Times reported that the company had 375 employees. Now Biltmore employs over 2,500 people; during the busy Christmas season even more are on the payroll. "That's a lot of paychecks going out into the community," said John Boyle, longtime Biltmore observer and columnist for the Asheville Citizen Times, adding that, "Biltmore has always been considered a good place to work."

For the surrounding community, Biltmore is extremely important as it is a huge driver of tourism and "those visitors also usually visit other attractions, eat at restaurants and visit art galleries and brewpubs, so the estate is a real economic engine for the area," Boyle told DW.

The benefit of being 'too commercial'

All of this is possible today because of one man, William Amherst Vanderbilt Cecil, a Harvard graduate who once worked at Chase Manhattan bank. He inherited the house and the property along with his brother, both grandsons of George Vanderbilt. At the time, the Biltmore Dairy was doing well and was able to support the whole place.

Most historic houses in the United States like Monticello, Mount Vernon or San Simeon are owned by nonprofits, trusts or the government. Most offer tours have a gift shop and a restaurant and don't make a lot of money.

Biltmore offers much more, and has therefore been accused of being too commercial. The preservation world usually wants to keep things how they are. Biltmore being privately owned — and hugely expensive to run — had to make money in order to preserve the mansion and everything inside.

William Cecil experimented and opened the estate's first restaurant, Deerpark, in 1979. That same year William and his brother decided to finally divide up the business. William got the unprofitable house with 8,000 acres: The Biltmore Company. George took the dairy, about 4,000 acres and the entire business infrastructure: Biltmore Farms. Suddenly, without the dairy to pay the bills, William Cecil was on his own. He would make or break the entire estate. 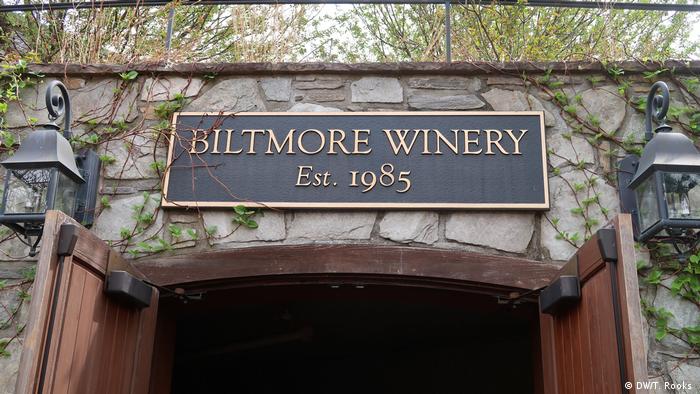 The Biltmore Winery was the company's biggest investment — and risk — in the 1980s. At the time it was thought that fine wine could not be made in North Carolina. William Cecil proved them wrong

With a shoestring budget, Cecil proved to be very creative over the years. He sold the estate's crops and plants from the greenhouses. For a while he made a business of his employee's restoration knowledge and even rented out the landscaping crew for off-property clients. To keep money coming in, he spent lavishly on marketing. He also focused on repeat visitors and to "keep bringing them back" he opened new parts of the house in 1980, which included the kitchens, swimming pool, bowling alley and gym.

Things moved along slowly until Cecil opened his biggest gamble of all, the $12 million winery in May 1985. It was a risky move and went against all advice that it was not possible to make fine wine in North Carolina. The winery, which operated in the old dairy building, offered free wine tastings to all (appropriately aged) visitors and was a huge success. In 2004, it sold 1.4 million bottles wine. Last year it produced around 1.8 million bottles. The company says it is the "most visited winery in America."

Soon after the winery opened, so did Biltmore's second restaurant and first gift shop in the former stable building. Later a bookstore, candy shop, toy store and Christmas shop were added. Investments and visitor numbers were racing skyward. 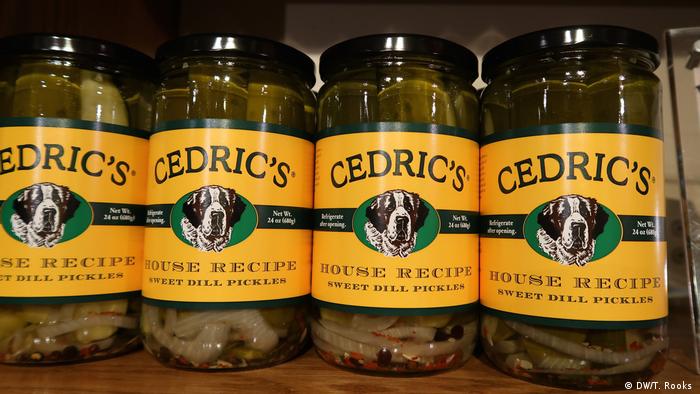 Besides wine, the company now has numerous gift shops and even sells its own brand of pickles named after George Vanderbilt's favorite dog, Cedric. The pooch also has a restaurant named in his honor

After shaping the Biltmore Company for decades, William Cecil retired in 1995. His son, Bill Cecil Jr., took over as president and CEO and his daughter, Diana Pickering, also worked for the company. Both had been raised on the property and felt a strong connection to it.

In 2001, they opened the 210-room luxury Inn on Biltmore Estate. In 2010, they opened a new complex of shops and an English pub-style restaurant next to the winery. Around this time they added horseback riding, fishing, Segway tours, biking and the Land Rover Driving School. This was followed by another hotel and specialty tours of the house.

In 2016, combined revenue from all the Biltmore companies was reported at $207 million.

Soon it will be handed over to the next generation: Bill Cecil Jr. has two children who work at the company and his sister, Diana, has one. And though the property is technically divided into parcels held by different companies for tax and inheritance reasons, the family has pledged to keep it together. Any additions will surely be in keeping with the vision of George Vanderbilt when he started building 130 years ago, but meet the needs of 21st century visitors.

"The company is conservative by nature, with a passionate, smart family in charge," said Boyle. Adding, that "they are good business people, but they're not commercially crass. In short, they keep it classy, yet profitable."

The internet giant Google has signed up with 18 Loire Valley chateaux to create virtual tours of the former royal dwellings. (06.07.2016)

Valletta - Living in a Baroque Mansion

The Maltese capital, Valletta, was founded in the 16th century by the Knights of St John, who built some beautiful churches and palaces. Many have survived and are now privately owned. (06.01.2017)

Normally Germany's castles are visitor magnets, but because of the coronavirus their doors remain closed. Someday this crisis will end, and when it does, here are our recommendations for a tour of Germany's castles. (14.04.2020)

Running a big winery has traditionally been the job of men, but in North Carolina Sharon Fenchak is tasked with turning the best grapes into the best wine. For her it is the perfect mix of science and food.