The Everglades are famous throughout the world, with alligators as perhaps their best-known inhabitants. However, there's a new predator in town — and it is wreaking havoc on this remarkable ecosystem. At a coffee shop in Davie, Florida, I'm waiting for wildlife biologist Ian Bartoszek. He causes a huge stir as he walks in with a giant platter of what could easily be choux pastries. Patrons look on confused, some approaching to ask if they are potatoes.

"These are Burmese python eggs," he tells them. "Right now in the field, there are many female pythons we didn't catch sitting on a clutch like this that will probably hatch."

The clutch of 40 desiccated eggs he carries is a highly effective hammer to drive home his point. Bartoszek, who works for the Conservancy of Southwest Florida, feels it is necessary to do everything he can to bring people's attention to the havoc these creatures are wreaking.

Florida's Everglades are known internationally for their alligators. But now another reptile has become king in the unique wetland: the invasive Burmese python. Native to South and Southeast Asia, the snake species was first sighted in the Everglades in the 1970s, after irresponsible pet owners released them into the ecosystem. 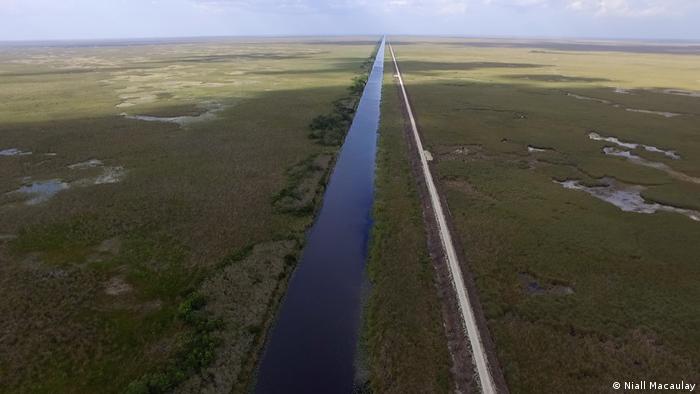 The Everglades' subtropical environment, with its ideal temperatures and abundance of defenseless prey, has helped the population of Burmese pythons explode

The subtropical environment, with its ideal temperatures and abundance of defenseless prey, helped their population explode. Today, the consequences are being felt.

Eating their way through native wildlife

By some estimates, their numbers may now exceed 150,000. The huge reptiles, which can grow to lengths of 23 feet (7 meters), and which weigh in at 250 pounds (113.4 kilograms), have eaten their way through much of the native wildlife, including raccoons, foxes, marsh rabbits, and birds.

Read more: Can The Everglades Be Saved?

"We have recorded a 99% reduction of fur-bearing animals," says Michael Kirkland, a biologist specializing in invasive animals at South Florida Water Management District (SFWMD). "They are now preying on wading birds and even the occasional alligator."

As populations of smaller mammals dwindle, the effects ripple up the food chain, and native predators like alligators and endangered Florida panthers lose their primary food sources.

"The pythons have essentially wiped out their prey base in Miami-Dade County, Everglades National Park and surrounding areas. We suspect they are going to be expanding their territories both west and north," says Kirkland.

The Everglades ecosystem, which once sprawled across more than 6,250 square miles (16,187 square kilometers), has been reduced to half its original size by agriculture and urban expansion, and now the pythons threaten to make the 'glades barren of life. 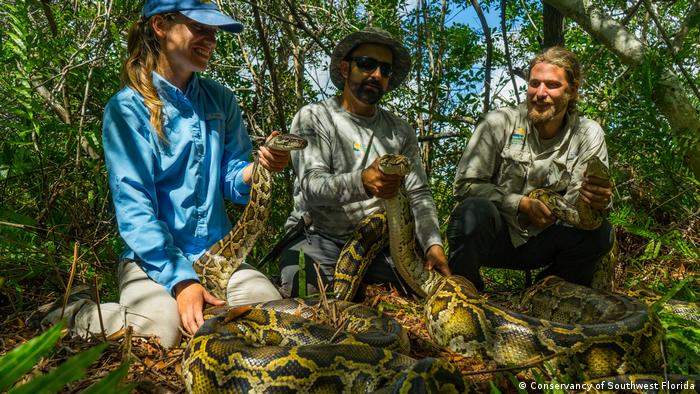 The Everglades are known internationally for its alligators, but now another reptile has become king: the invasive Burmese python

"Doing nothing is not an option," Kirkland asserts. To protect the remaining wildlife, the SFWMD has licensed a select group to participate in its python hunting program, which began last year.

Recording its 1,100th python catch recently, the agency has extended the program and the Everglades National Park is joining the effort, recruiting python hunters to remove the snakes and permitting the use of shotguns.

"I believe the park is really the epicenter of the python invasion," asserts Kirkland.

Hunting in the dark

The Everglades are a tough environment — a vast, slow-moving waterway with a surprising variety of terrain and dramatic seasonal changes. With oppressively sticky heat, biting flies, razor-sharp sawgrass and even poisonous trees, it's no walk in the park.

Hunters can spend a whole week of 12-hour days looking for pythons without finding a single one, so perseverance is key. Thomas Rahill, one of those authorized to remove the snakes, is founder of the Swamp Apes, a group mostly composed of military veterans dedicated to fighting invasive species. He is well aware of the perils of the job.

"When you come across a big python, I don't care where you are, it is a very dangerous animal, you have to know what you are doing," he says.

Once the sun sets, impenetrable darkness quickly descends over the 'glades. Firing up a spotlight mounted on his car roof, Rahill looks for pythons crossing on the levees, which are the perfect places for these cold-blooded predators to warm up.

They are one of largest snakes in the world and are ectotherms, meaning their body temperature regulation depends on external sources, such as sunlight or a heated rock surface.

Rahill says most of the 500 snakes the Swamp Apes have caught were found while road cruising on the levees, especially at night. 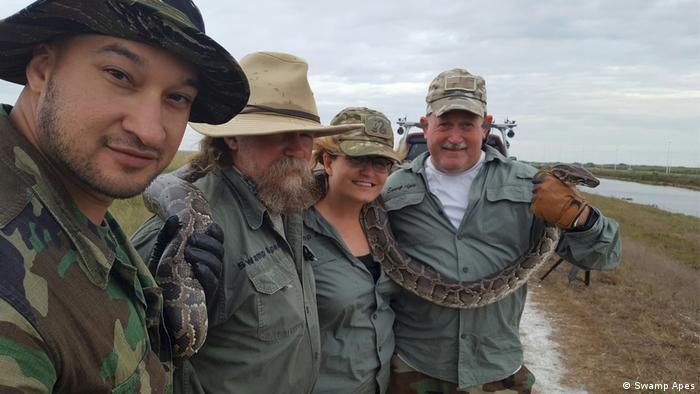 Swamp Ape python hunters also walk along the sides of the levees, searching every hole and burrow, looking for python nests with a borescope camera. As they move on, they cover the holes with dried sawgrass, returning later to check for disturbances.

Rahill's team also takes boats out to tree-covered islands, where they push through dense vegetation on foot — a technique they call "jungle busting."

Back at the coffee shop, biologist Ian Bartoszek expands on the urgent need to understand the pythons' behavior. The team at Conservancy of Southwest Florida has implanted male pythons with transmitters and tracked them, with definite success.

Their research area now covers 50 square miles, having expanded significantly over the past five years. In February this year, an implanted snake they named "Argo" led them to a 99-pound pregnant female python. Three days later, Argo was released and tracked again to seven snakes, including a 115-pound female.

In four years of tracking, the team has removed 10,000 pounds of python biomass from their research area.

The conservancy now has 20 male snakes working for them. Other researchers are attempting to synthesize the python's pheromones to attract larger numbers of pythons.

"I have a feeling we're definitely gaining some ground in some key areas," Bartoszek tells DW.

The Burmese python's reign is challenging the Everglades apex predator, the alligator. Recently, Mike Kimmel, a hunter with the SFWMD, rescued a 4-foot alligator from the grip of a 10-foot python.

As Mike Kirkland puts it, "pythons really are the apex predator now — a large python and a large alligator, either one could win that battle. The alligator is about the only native animal down here that could possibly win." 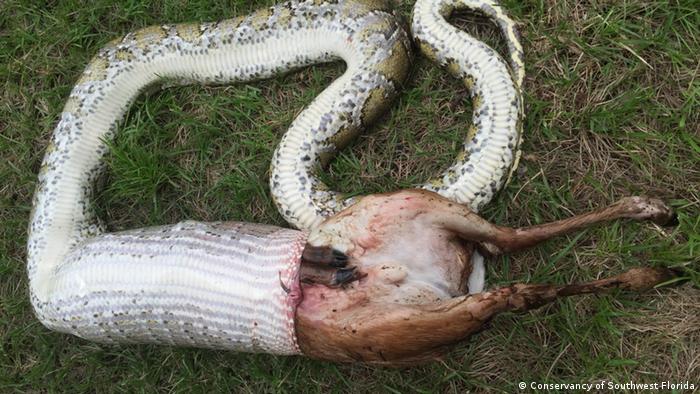 Earlier this year, conservancy biologists discovered an 11-foot-long female python with a white-tailed deer inside its mouth

Earlier this year, conservancy biologists from Collier-Seminole State Park, a Florida State Park located on the southwest coast of the US state, discovered an 11-foot-long female python with a white-tailed deer inside its mouth.

"That was a 31.5-pound python that had a 35-pound white-tailed fawn in it. It was eating 111 percent of its body weight," says Bartoszek.

It is the largest documented prey-to-predator ratio for a Burmese python.

"I'm holding it in my hands looking at this small jaw. It was a turning point," remembers Bartoszek. "I knew then the beast we're dealing with and what it is capable of."

The self-cloning crustaceans exploded amongst Germany's aquarium hobbyists in the 1990s. Now it has become an invasive species in countries as far away as Japan and Madagascar. (12.02.2018)

With its high number of parks and historic villas, Rome has become a top attraction for invasive species of birds. Reporter Megan Williams provides a personal take on sharing the city with the new avian arrivals. (01.08.2017)