The Bundesliga looks back at 50 eventful years

The Bundesliga has turned a half-century old and is now reflecting on its rich and varied past. What may now be the world's best domestic league had some very humble origins indeed. 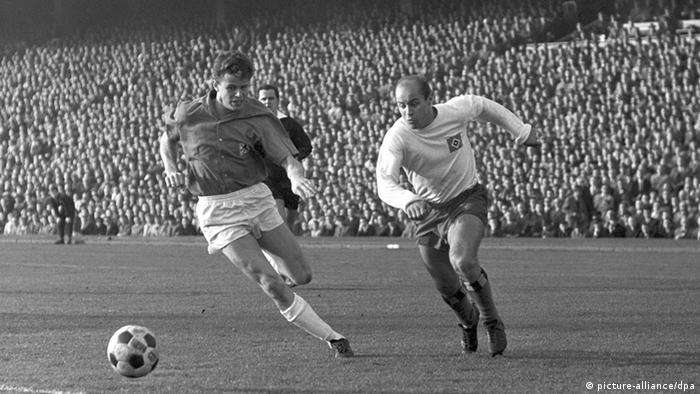 The Bundesliga was formed in 1963 to address a problem that seems unbelievable to today's fans, who know football as the biggest money sport on the planet - lack of professionalism.

For most of the first century of the game in Germany, football was played in regional leagues, with the national champion being determined in a play-off between local winners. West Germany had won in the 1954 World Cup in what became known as the “Miracle of Bern,” but the country's footballing fortunes had been declining ever since.

Even the top players were at best semi-professionals who only practiced twice a week and had to have outside jobs to make ends meet. Moreover, there was an official cap on what footballers could earn.

"I believe Hans Schäfer and I had the highest wages authorized by the German FA," legendary Hamburg striker Uwe Seeler recalls. "It was only 1250 marks gross. I couldn't even afford a flat for my family in Hamburg."

It was no accident that Cologne, the most professionally run club at the time, nabbed the first-ever Bundesliga championship ahead of Meiderich SV, today's MSV Duisburg. The sixteen original members of the new German first division included now obscure teams like Prussia Münster and Saarbrücken, and some very big names were missing.

By the end of the 1960s two promoted teams won the title. They would go on to set the tone for the decade to come: Bayern Munich and Mönchengladbach. 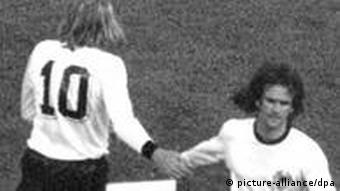 The 1974 World Cup gave the Bundesliga a big boost

Attendances were good in the Bundesliga's early years, but the popularity of the new league - and the money it generated - had negative as well as positive consequences. In 1971, the sport was rocked by revelations of match-fixing. Dozens of players, two coaches and a handful of club functionaries were given lengthy suspensions.

The scandal could have been fatal for the young league. Fortunately, though, German football was entering its first golden era. West Germany won the World Cup again in 1974.

"It was only when we travelled through the city after winning the final in Munich that we realized what we'd achieved,” Mönchengladbach and Germany midfielder Rainer Bonhof remembers. "There were hundreds of thousands of people cheering us. That had never happened before then. After a while you realized that all of Germany, after everything that had happened in the early ‘70s, had bonded into one footballing entity again."

Gladbach got the better of Bayern in the 70s, but the Bavarians had an advantage that would prove telling over time. Their home grounds, Munich's Olympic Stadium, dwarfed the Bökelberg in Gladbach, giving Bayern crucial extra ticket revenue.

And when oft-injured striker Uli Hoeness was named the team's commercial manager in 1979, Bayern were perfectly poised to become the Bundesliga's powerhouses. 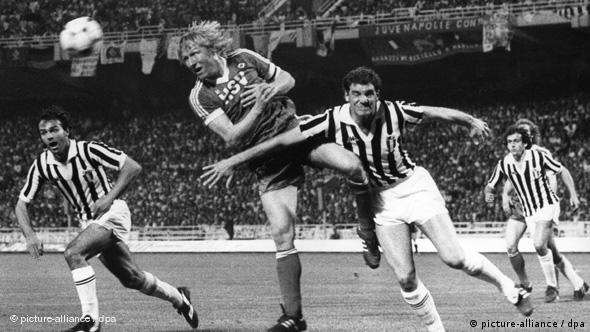 By the 1980s, the following pattern had been set. Bayern would win the Bundesliga roughly half of the time, with the other clubs taking turns trying to dethrone them. Munich's biggest rivals were Hamburg. The team from the wealthy Northern German city won in 1982 and 1983.

Bayern didn't even bother to scout opponents in those years.

"We hardly ever based our setup on our opponents," Bayern striker Dieter Hoeness - Uli's younger brother - told DW. "Back then all we thought about was playing OUR game, and that summed up our approach to matches. It became part of everything we did, you just internalized it."

Hoeness and Hamburg's hulking center forward Horst Hrubesch were typical of an era in which German football was oriented around efficiency rather than inspiration. There were lots of high speculative balls into the box and rarely much good combination play.

Then in 1989, the Bundesliga was revolutionized along with the rest of German society with the fall of the Berlin Wall and the end of the Cold War. 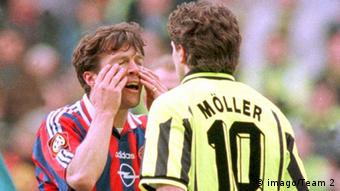 Matthäus (L) was a master of winding up opponents

West Germany won the 1990 World Cup, causing coach Franz Beckenbauer to assert that with the influx of players from sports-obsessed East Germany the reunified nation would be next to unbeatable.

That prediction did not come true. Although some 40 players born in East Germany would play for the German national team, the Nationalelf would win the 1996 European Championship – but nothing more. And the best club football was now being played in Italy, Spain and England

"Money scores goals" - it was during the 1990s that the truth of this axiom became fully apparent. Under Uli Hoeness' leadership, Bayern had become a financial as well as sporting juggernaut, and after the Bosman Ruling in 1995 allowed players far more latitude in selling their services, being the highest bidder was key to forming the best team.

Borussia Dortmund emerged as Bayern's greatest rivals, winning the league in 1995 and 1996 and capturing the Champions League crown the following year. That squad, which featured Portugese midfielder Paolo Sousa and Swiss striker Stéphane Chapuisat, reflected the fact that the Bundesliga was becoming more and more international. Krassimir Balakov and Giovane Elber won a title with Stuttgart while Youri Djorkaeff did the same with Kaiserslautern.

But while the contenders rotated, the dominant team remained Bayern.

"It's like a Formula One race," Bayern legend Lothar Matthäus puts it. "We get overtaken when we have to pit. But later they have to pit too and we go back in front."

And to extend the simile, many of the Bundesliga clubs would be like cars overheating their engines in trying to keep pace with Bayern. 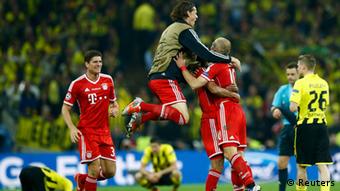 Bayern and Dortmund were the class of Europe this season

In 2000, Germany exited the European Championship in the first round bottom of their group. And the inflated salaries and transfer fees of the final years of the twentieth century had driven many German clubs to the brink of bankruptcy.

These were dark days for German football. But it was also the start of a youth kick that has led to a second golden era of German football. After the Euro 2000 debacle, the DFB required German clubs to invest in youth academies, and that initiative has paid off in an incredible wealth of new talent, from Bastian Schweinsteiger and Philipp Lahm to Mario Götze, Marco Reus and Thomas Müller.

The 2006 World Cup in Germany unleashed a new wave of football euphoria among the general populace. And in the past few seasons Borussia Dortmund under Jürgen Klopp and Bayern under Louis van Gaal and Jupp Heynckes have played the sort of high-velocity, pressing football never seen before in a nation better known for great goalkeepers and uncompromising defenders.

"There have been many discussions about the great football generations, teams from ‘54 and ‘70, the European and World Champions," Klopp said with characteristic simplicity and frankness. "The ‘90s squad, what a team. But the fact is today's teams run more and faster."

The 2012-13 Bayern Munich squad that pulled off an unprecedented German treble and rewrote the Bundesliga record books must surely rank among the greatest teams of all time. And it was no accident that this year saw the first-ever all-German Champions League final.

Clearly, the Bundesliga and German football have come a long way since the days when Uwe Seeler needed a part time job to afford somewhere to live.