Deutsche Welle recognizes the best from the blogosphere at an awards ceremony during the Deutsche Welle Global Media Forum on June 4, 2009. Bloggers from Cuba and China unable to attend 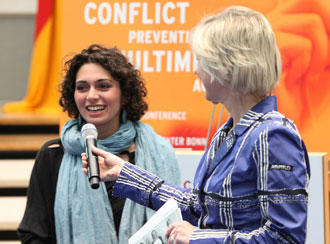 “This prize comes at the right time for our campaign,” said Nazli Farokhi from Iran. Her blog, “4equality”, has existed for around four years now and has been blocked by authorities time and again. “The BOBs award has given us a boost.” The winner of the Reporters Without Borders Award attended the awards ceremony for The BOBs – DW’s international weblog awards on June 4 during the Deutsche Welle Global Media Forum in Bonn. Farokhi’s blog accompanies a campaign in Iran fighting for women's rights and an end to discrimination.

Notably absent was Yoani Sánchez from Cuba. The winner of the top prize from 2008 wasn’t able to make the trip as authorities in Havana apparently rejected her request to attend the event. However, she did greet the audience with a video message, explaining that maintaining a blog In Cuba “is an adventure that can drive one close to madness.” In her winning blog “Generacíon Y“, the renown blogger reports on the daily life of the younger generation in Cuba.

The winners from China, Liu Xiaoyuan, and Zeng Jinyan, were also unable to attend. Deutsche Welle has learned that Zeng Jinyan remains under house arrest. She is the wife of the detained human rights activist Hu Jia and uses her blog to describe having a life that is constantly under surveillance from the Chinese authorities. The Iranian actress Pegah Ahangarani received the awards in place of The BOBs winners from Cuba and China, who weren’t able to attend. She wrote a blog for Deutsche Welle earlier this year, covering her impressions from the Berlinale.

The following winners received their awards at the ceremony on June 4 in the World Conference Center Bonn:

Last year, Internet users from around the world suggested more than 8,500 blogs for the Deutsche Welle Weblog Awards in 11 languages. An international jury made up of journalists, media scientists and bloggers chose the winners from those suggestions.

Photos from the Global Media Forum