During Nazi rule, the Berlin Philharmonic was the "Reichsorchester." 70 years later, the orchestra played a memorial concert on violins once owned by Holocaust victims and survivors. An Israeli is first violin. 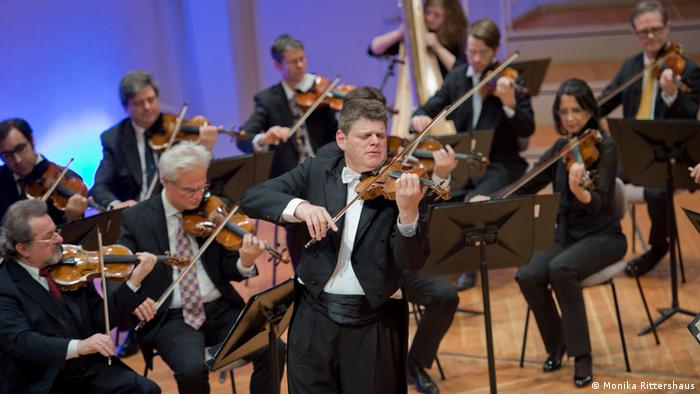 Guy Braunstein is famous for never having stage fright. The Israeli devours the stage. When he's not playing his violin, the tall and athletic musician carries it as if it were a football.

Braunstein started playing when he was seven years old. He performed in major halls as a child and a teenager, developing his career as a solo musician. His first stint with the Berlin Philharmonic Orchestra came at age 21. Braunstein was doing his military service at the time - his shaved head offered an unusual combination with the tail coat. He was appointed as concertmaster of the Berlin Philharmonic in 2000, the youngest the orchestra ever had. He stayed in Berlin 13 years, then left to pursue his solo career. 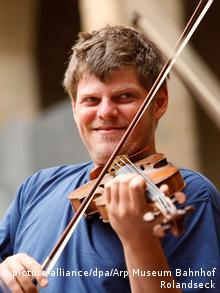 On January 27 he returned for a memorial concert marking the 70th anniversary of the liberation of Auschwitz. This time, it felt different. Guy Braunstein, the first violin, was nervous.

Violins of Hope - from Tel Aviv to Berlin

After all, some very venerable guests were in the audience for this special concert. Seated in first row of the chamber music hall, right by Germany's foreign minister Frank-Walter Steinmeier - who gave the opening speech - were Auschwitz survivors Yehuda Bacon and violin maker Amnon Weinstein.

Weinstein made it his life's mission to restore instruments that survived the Holocaust, preserving the memory of their previous owners through his work. He was the evening's guest of honor, as the 16 instruments played in this memorial concert called "Violins of Hope" all came from his workshop in Tel Aviv. Among them is the violin played by Guy Braunstein - a very special one.

Braunstein was the only violinist in the orchestra who was allowed to pick his instrument in advance. Visiting his family in Tel Aviv, he took the opportunity to stop by Weinstein's workshop. "I took it in my hands and knew immediately: This is one is mine," he said before the concert. "The sound impressed me. I didn't even know at that point that it had been played in an orchestra in Auschwitz."

The violin lived through tragic events, but its story also carries hope, as the owner of the instrument survived as well. After the war, he could not play the instrument himself - the memories were too horrific. So he sold it in 1946 to another Holocaust survivor, whose son brought it to Amnon Weinstein's workshop. Now the violin is getting another opportunity to be played again, by Guy Braunstein.

The memory of instruments

"When I play this violin," said Braunstein, "it is simply overwhelming. We musicians are not very good at using words to explain things, we speak with our instruments." And the violin certainly delivered its story: when Guy Braunstein and the Berlin Philharmonic played Johann Sebastian Bach's Concerto for Violin, Strings and Basso continuo, tears streamed down the cheeks of many of the listeners in the audience. 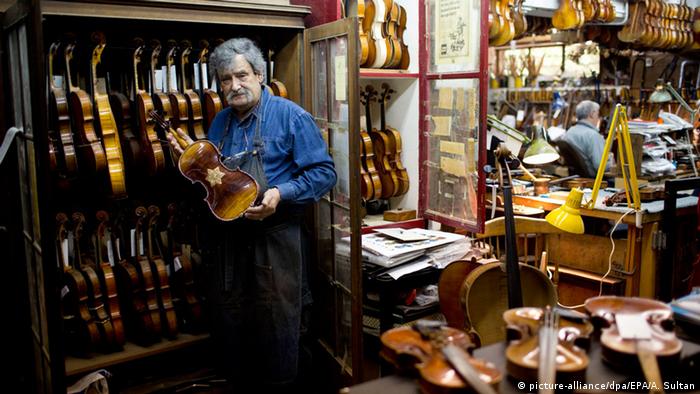 Violin maker Amnon Weinstein in his workshop in Tel Aviv

"Just as we musicians deeply believe that concert halls carry music in their walls, I also believe that instruments remember the circumstances in which they were played," said Sir Simon Rattle just before he started to conduct the opening piece of the memorial concert that evening, the Adagietto from Mahler's Symphony No. 5. "When you hear these instruments, you can feel what they have experienced."

Rattle revealed he had a very personal approach to this memorial concert. His mentor was another Holocaust survivor. Rudolf Schwarz, chief conductor of the City of Birmingham Symphony Orchestra from 1951-1957, a position occupied by Rattle decades later, was the most influential man in his career. Schwarz told Rattle about Auschwitz. While conducting the concert, Rattle is certain to have sent thoughts out to the man he affectionately calls "Rudy."

From "Reichsorchester" to orchestra of reconciliation

Violin maker Amnon Weinstein and violinist Guy Braunstein both agreed that the concert symbolized "a victory over the Nazis." "A double victory," added Braunstein. After all, the Berlin Philharmonic is no ordinary orchestra. 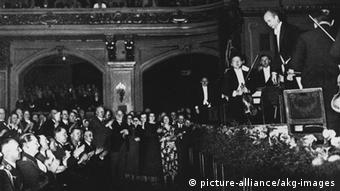 Furtwängler conducting in front of the Nazi political leadership (around 1934)

During the Nazi period, the Berlin Philharmonic had the status of "Reichsorchester," so named by Joseph Goebbel's Ministry for Public Enlightenment and Propaganda. Until the end of the war, the orchestra conducted by Wilhelm Furtwängler was at the service of Hitler's government, playing for the Nazi Party rallies in Nuremberg and the Olympic Games, holding regular concerts in support of the Nazi charity initiative "Winterhilfswerk" (Winter Relief) and the state-operated leisure organization "Kraft durch Freude" (Strength Through Joy). The orchestra went through an Aryanization process; four outstanding musicians had already left by 1934, among them concertmaster Szymon Goldberg.

Unlike other orchestras, musicians with one Jewish parent were allowed to stay in the Berlin Philharmonic. This is one of the reasons why Wilhelm Furtwängler's role in the Third Reich is still debated, even though the post-war denazification process classified him as a "follower."

The concert was followed by several minutes of standing ovations. Amnon Weinstein, the violin maker, was speechless. "I need to breathe first," he stammered. "The way you played was so beautiful - I cannot put it into words." He added that he kept his handkerchief in his hand the whole time, to dab his tears once in a while. He was certainly not the only one to do so.

The artworks created in concentration camps are usually appreciated for their testimonial value. An exhibition in the German Parliament, the Bundestag, aims to change this limited perception. (27.01.2015)