Born 200 years ago in Germany, the adventurer-archaeologist Heinrich Schliemann was obsessed with finding the kingdom of Troy described in Homer's "Iliad."

A Greek armada sails eastward. Its aim: to bring back Helen, the most beautiful woman in the world, back to Greece. They besiege Troy for 10 years, but only through cunning do they finally find her. The warriors hide within a wooden horse, which the unwitting residents of Troy pull into the walls of their city. This proves to be their downfall.

The Greek poet Homer created an epic of antique world literature from this story. His "Iliad" fascinated innumerable generations and in this manner, the lost city remained alive in people's minds.

"Despite its location in Asia minor, Troy marks the beginning of European history," says Ernst Baltrush, professor for ancient history with focus on Roman history at the Free University of Berlin.

Homer's "Iliad" had a huge significance even in antiquity. "The ancient excitement regarding the Greeks and Romans has been carried over to this day," Baltrush says. 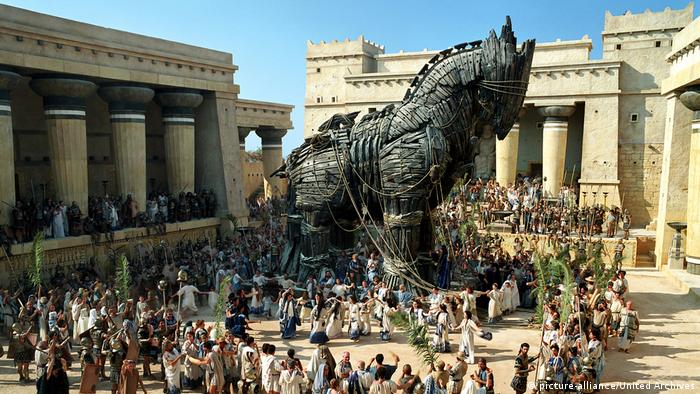 An enduring myth: the Trojan horse, shown here in the 2004 film 'Troy'

Born on January 6, 1822 to a pastor's family in present-day Mecklenburg-Western Pomerania in northern Germany, Heinrich Schliemann developed his fascination for Troy as a child; the 7-year-old was particularly impressed by a picture of the burning city in the book "Weltgeschichte für Kinder" (World History for children). The boy firmly believed that there should be at least some remains of the city walls, and dreamed of unearthing Troy.

Schliemann clung to his ambition for more than 40 years, until he began with unauthorized excavations in 1870 at Hisarlik, in present-day Anatolia in Turkey.

He got the official permission for excavation only a year later, on October 11, 1871. Schliemann was so convinced he had found the Troy of antiquity and of Homer's poems that he asked the US embassy to support him. His request was granted.

A night in the Trojan horse

For the adventurer, antiquity was a life dream, although his career initially led him on a different path. Growing up with eight siblings in a pastor's family, he was unable to continue formal education, so he began a business apprenticeship.

He finally reached Amsterdam after many detours, where he found a job as a messenger at a trading post. His ability to learn languages helped him. In only a year, he learned Dutch, Spanish, Italian and Portuguese. Later, he added Russian to his repertoire and knew when to strategically deploy his language skills.

After moving to Russia, he dealt in raw materials for munition and made a lot of money.

He later went to Paris and studied ancient Greek and Latin. An educational tour led him to Ithaca in 1868, where he undertook excavations to find the palace of Odysseus. From there, he traveled further to the sea of Marmara.

Looking for Troy with a copy of the 'Iliad'

Schliemann was a combination of a dreamer and underestimated genius. A dreamer, because he traveled through Turkey with a copy of the "Iliad" by Homer in his hand and a genius, because he invented a research method around the end of the 19th century, which still is being used today. His German counterparts however, did not recognize his achievements for a long time.

Schliemann is a controversial character even today and is seen more as an adventurer rather than an archaeologist. He did not have a problem with adding his own inventions to his records. "Every archaeologist today will warn against using Schliemann as an orientation, because he did not stick to the standards of archaeology at the time," historian Ernst Baltrusch says.

Even Schliemann's competitor, expert archaeologist Ernst Curtius, did not really respect him. Many researchers were annoyed with Schliemann because he let his workers dig deep trenches without paying attention to losses, thus leading to the permanent destruction of important traces of settlements.

But Schliemann obtained much support in England, where he was hailed as the discoverer of the fabled Troy.

The Trojan war: myth or reality

The search for the city of Troy consumed thousands of years, but no one could prove that Homer's epic about the Trojan war was true.

"What is written by Homer and what Schliemann used as a basis for his archaeology is still debated," Baltrusch says. "We don't know whether this battle really took place." What makes Schliemann important is his literal interpretation of the "Iliad," according to Baltrusch. "He learned ancient Greek for this book and then set off to find the sites. Schliemann assumed the existence of the Trojan war."

In 1871, the 49-year-old Schliemann bumped into the suspected remains of Troy in Hisarlik, in northwestern Turkey. Schliemann was not the first who thought he had discovered the city described by Homer.

The Englishman Frank Calvert had already begun excavating in the region before the German adventuer. Both got to know each other by coincidence. Calvert owned the land around Hisarlik, but did not have any money to dig further.

The millennia-long settlement of Troy, beginning from 3000 BC to the High Middle Ages, made it initially difficult to determine the exact origin of the findings. Calvert convinced Schliemann to take up what he had left unfinished and in 1872, Schliemann was sure that the thick walls, which he had excavated, belonged to the fort of ancient Troy.

Schliemann smuggled the treasure out of the country. When the Ottoman government got wind of this, they charged him and demanded he return half of the findings.

But at the end of the trial, Schliemann gave away only some of the less important pieces, which he bought back later, and paid a penalty of 10,000 gold francs.

He tried selling the treasure to the Louvre in Paris and the Hermitage Museum in St. Petersburg, without success.

Finally, he gifted them to Germany and gained a lot of recognition in return: He was appointed honorary member of the Berlin Society for anthropology, ethnology and prehistory and was pronounced honorary citizen of the city of Berlin.

During the tumult of World War II, the treasure found its way to Russia and was considered lost for many years. Today, it is kept in the Pushkin museum in Moscow.

Germany has been trying to recover the objects for some time now, but Russia has consistently rejected the demands, saying that they function as wartime reparations. The Turkish government also lays a claim to the artifacts and is negotiating with Russia since some years now. 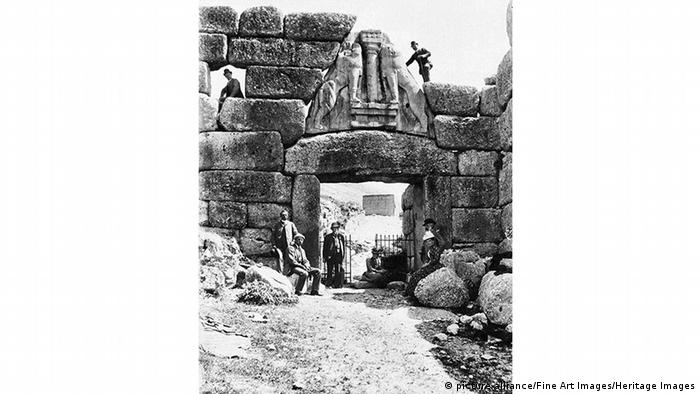 At the Lion's Gate: the entrance to Mycenae

Not the actual treasure of Priam

Even during Schliemann's lifetime, suspicions began to grow that his sensational findings were not the treasure of Priam, the legendary King of Troy.

They were rather found to come from an unknown high culture, which is around 1,250 years older than Troy.

Even in Mycenae, where Schliemann excavated from 1874 to 1876, the German adventurer was mistaken: The gold mask which he dug up did not belong to the Mycenaean King Agamemnon.

Regardless, the world forgave Schliemann for his errors and the man, who died in Naples on December 26, 1890, is still remembered around the world today.

"Beyond his archaeological methods, Schliemann is naturally connected to the name of Troy forever," says historian Ernst Baltrusch. "He is probably the best-known archaeologist ever because of his work on Troy."

German archaeologist and antiquity lover Heinrich Schliemann searched the ancient city of Troy. His legacy still inspires the field of archaeology — but some of his methods were controversial.

The legendary world of Agamemnon

Treasures of Mycenaean culture, one of Europe's earliest advanced civilizations, are exhibited for the first time in Germany in a major exhibition at the Schloss Karlsruhe Museum.