London marks the 350th anniversary of the Punch and Judy puppet shows this spring. Punch and his German counterpart Kasperl have their origins in 16th-century Italy although things have changed a lot since then. 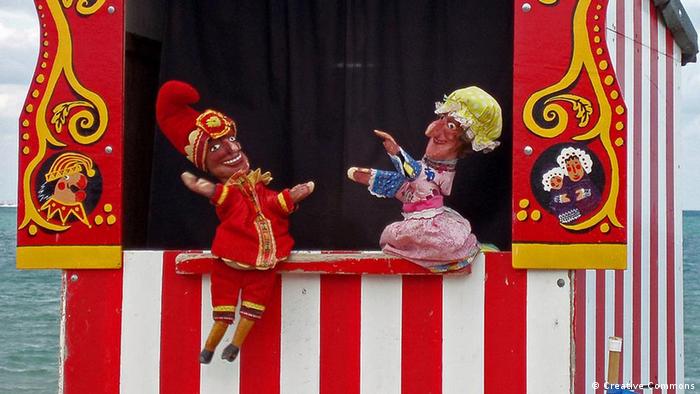 When Mr. Punch comes out on the puppet stage, he's instantly recognizable with his clownish grin, glowing red cheeks and a long, hooked nose.

His wife, Judy, bears a certain likeness to her husband, and sometimes asks him to look after their baby when she has to go out. But when the baby begins crying, Punch usually remedies the situation with the huge stick he usually carries, whacking the baby over the head.

"That's the way to do it!" he'll yell, as the children in the audience erupt with laughter.

Punch doesn't stop at the baby; he hits Judy and just about all of the other characters that make an appearance: a crocodile, a police officer, even the devil himself get a whacking by the unstoppable Punch.

The Punch and Judy Show, England's most popular street-puppet play, celebrates ist 350th anniversary this year and this May most of the performers who put on the show in the UK and around the world will gather at London's Covent Garden for a puppet extravaganza.

There will be hundreds of Punch and Judy shows around the city, with Punch invariably causing absolute mayhem on the stage.

Besides being a hit in England, Punch was very popular in Paris and even made a splash in England's American colony. It is said that George Washington even bought tickets for a production. 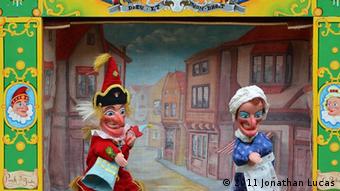 Punch made his earliest appearance in the 14th century in Italy, where he was Pulcinella

In the 18th and 19th centuries, children's puppet theaters began using glove puppets instead of marionettes, largely because they were sturdier and stood up better to frequent transport. But they also opened up new possibilities for the show, which was always fairly rowdy.

Gloved puppets don't have the marionette's strings that can get tangled up when the action - and the whacking - starts.

"If you've got a puppet on each hand, and they are made of wood, knock about is what they do," said Clive Chandler, a Punch and Judy puppeteer for over 30 years. "They're not going to deliver long speeches."

Germany's equivalent to Punch is Kasperl, who has an equally long history but who these days is a nice, helpful guy who has a kind word for everyone and wouldn't harm a thing. Kasperl is a far cry from the boisterous Punch, although he wasn't always so gentlehearted.

The Museum of Munich has a permanent exhibition on puppet entertainment, which features a puppet stage from the 1920s. The exhibit features several characters from a Kasperl play, including a judge, a grandmother, a crocodile and more.

There are also a lot of "tools" that can be used to bash someone with, such as a pitchfork and a frying pan. 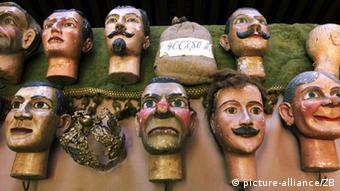 Puppetry is a very ancient form of theater

In these traditional plays, Kasperl used everything at his disposal to vanquish his opponents, often in brutal and quite crude ways. But things changed after World War II, according to Manfred Wegner, in charge of the puppet exhibit at the Museum of Munich.

"Nobody wanted to see killing anymore, or hitting - or senseless hitting at least," he said. "If there was to be hitting, it would be for a reason, or in order to right a wrong."

In the 1960s, Karsperl came under attack again when he was seen as representing authority, someone who dictated to children. Puppeteers began rethinking Kasperl, again.

"They said, 'We want to encourage children to think. We need a different kind of role model - not a Führer figure, who passes on unquestioned values,'" Wegner said.

So while Britain's Punch can hit all he wants, that style has become relatively rare in Germany.

"Even the evil crocodile doesn't get killed anymore! If you did do that, you would have a thousand people from the animal protection league on your case," said Thomas Fischer, a Kasperl puppeteer.

According to him, it is inconceivable that Kasperl would hit Gretl or his best friend Seppl, since most German puppeteers don't believe a child should have to deliberate whether or not to hit his or her friend. They want children to leave a Kasperl show relaxed and happy, not tearful and disconsolate. In the Kasperl shows, Germany's Punch and Judy, the violence has been tamed

Given Germany's past, the wish to avoid exposing children to violence - even of the wooden-puppet variety - might be understandable. But as has been debated for years - usually around violent TV shows or video games - the jury is still out on whether children mimic the violent behavior they see on the screen or stage.

"Children can either take these behaviors as being instances of things that they can do themselves, or they might take them as instances of behaviors they need to be aware of," said Andrew Tolmie, chair of psychology and human development at the University of London's Institute of Education..

"And of course if people have ever been to a Punch and Judy show with children, they will know that children actually enjoy it immensely," he added. "They get so engaged with it, in a very humorous way. They laugh a lot, so the reaction is not one of disturbance."

Clive Chandler, the Punch and Judy puppeteer, thinks the shows have positive lessons to teach; they're not just about hitting your way out of every situation.

"I'm not saying that Punch and Judy is going to save the world, but throughout all time it has connected with the desire not to take any form of authority too seriously," he said.

"A society that can understand that, is a much healthier society," he added.

The British Film Academy has announced its nominations for the 2012 BAFTAs, handing out 12 nominations to French silent film "The Artist." The awards are to be held on February 12 in London. (17.01.2012)

Former British Prime Minister Margaret Thatcher remains a divisive figure in the UK, 20 years after she left office. Even in her home town the locals are still arguing about whether to honor her, possibly with a statue. (05.01.2012)