Iron Lady′s home town loathe to see her cast in bronze | Europe| News and current affairs from around the continent | DW | 05.01.2012

Former British Prime Minister Margaret Thatcher remains a divisive figure in the UK, 20 years after she left office. Even in her home town the locals are still arguing about whether to honor her, possibly with a statue. 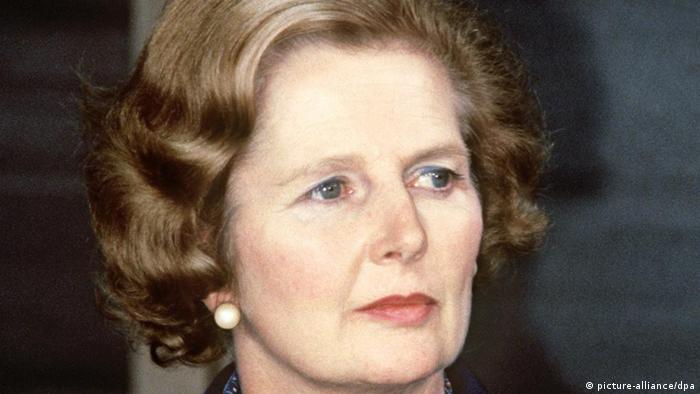 A new film - The Iron Lady - has just been released in Britain and the US. It stars Meryl Streep and charts the rise and fall of the former British Prime Minister, Margaret Thatcher. Streep is tipped to get her 17th Oscar nomination for the role. But aside from Streep's performance, the critics have both praised and decried the movie in equal measure.

Xan Brooks, writing in The Guardian newspaper, said Streep's performance was "the one great weapon of this often silly and suspect picture." Others have criticized the fact that the film was made at all, given the fact that Thatcher is still alive.

The division over the film's reception is reflective of the controversy surrounding Thatcher's career. More than 20 years after she left office, she remains as divisive as ever. Arguments still rage around the changes to the social welfare system and economic structures she brought about in Britain in the 1980s. 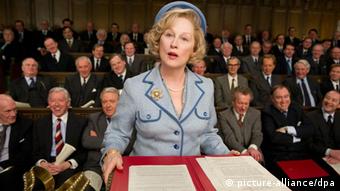 Streep is tipped for an Oscar for her role as Thatcher

Even in her home town of Grantham in Lincolnshire, the locals can't agree on how - or even whether - to honor the local girl who became Britain's first, and to date only, female Prime Minister.

As a girl, Margaret Thatcher lived above a modest shop in Grantham. Her father owned a greengrocer's. Today, the building is used as an alternative medicine clinic. There's little to connect it with its former - now famous - inhabitant.

"All you will see is a small rectangular plaque above the shop where Mrs Thatcher lived," local Conservative politician Ray Wooten told Deutsche Welle. "Apart from that there's nothing at all in Grantham to say that she was from here."

Wooten has called for a statue of Grantham's most famous daughter. He wants it to be erected alongside an existing statue of the town's most famous son: the man who discovered gravity, Isaac Newton.

Wooten says that Thatcher allowed people to defy gravity and rise above their humble origins.

"She made Britain a fairer place to live in," Wooten said. "A country, where regardless of your background, you can get on, have opportunities to succeed in life." 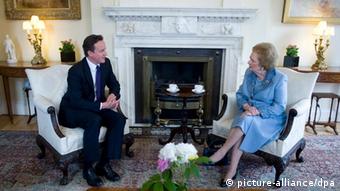 Thatcher remains a towering figure of the Conservative party

In her years as Prime Minister from 1979 to 1990, Thatcher shook up the British economy by curbing the power of the trade unions, and pushing for a free market. She bulldozed her way through any opposition to her plans, earning herself numerous enemies along the way, not least back home in industrial Grantham.

"I'd rather Grantham was known for Isaac Newton than for Margaret Thatcher. Her economic policy, as is shown now, was totally wrong," says local resident Ursula Brown.

Like many Britons, Brown believes that Thatcher ruined the British economy, because she withdrew state aid from manufacturing, while promoting financial services.

"All the manufacturing industry has been much reduced. And the banking and financial services … it's terrible what they are doing."

Thatcher tried to cut the size of the state. She sold off many state-owned assets like water and power companies, claiming their services would be delivered more efficiently in the private sector. They're certainly more expensive says local Labour councillor, Ian Selby.

"We've got electricity bills going up … astronomical increases: 20, 30 percent increases in some of these."

Selby is vehemently opposed to any plan to erect a Thatcher statue in Grantham. He says she failed the ultimate test of leadership: she did not unite the country, she divided it. But does he not at least feel some sneaking pride that a local women went on to achieve the highest office in the land?

"Proud? I'm definitely not proud," Selby says. "I'm actually embarrassed. When I go anywhere and people ask me where I come from and I say 'Grantham,' they turn around and say 'Ugh, that's where Thatcher came from isn't it?' And it's so, so embarrassing."

Of course Margaret Thatcher does have her supporters in Grantham. There are those who see her as the leader who arrested Britain's economic decline. And for some, she even became a feminist icon.

But that apparently did not endear her to many locals. One local paper asked its readers what they would like to see displayed at a prominent site in the town: a bronze statue of Margaret Thatcher or an antique steamroller. 85 percent voted for the steamroller.

With unemployment affecting nearly one-in-five young people, there's growing concern that the UK is developing a youth "underclass," set to spend a large part of life on welfare. (22.05.2011)

A student demonstration against higher fees which turned violent could be a taste of things to come for the British government. Unions and students are promising to continue protests against the austerity drive. (12.11.2010)

At its peak more than 70 percent of British people owned their own home. But, as the economy struggles to return to pre-2008 levels, buying is no longer an affordable option for the so-called "generation rent." (02.09.2011)