A sea turtle has died of blood poisoning following surgery to remove nearly 1,000 coins she swallowed while in captivity. Vets hope Thais will pause before tossing coins into ponds with live animals. Nearly all species of sea turtle are endangered, largely thanks to human activities. Biologists in North Cyprus are trying to save one species with GPS and education. (06.03.2017)

Europe's high court has ruled that Greece has failed to protect an important nesting site for the loggerhead sea turtle. Nesting sites are of utmost importance, since loggerhead breeding is infrequent and precarious. (11.11.2016)

For the love of turtles

The endangered hawksbill sea turtle lays its eggs in the Dalyan Delta on Turkey's southwest coast. With charm and dedication, June Haimoff of England devotes her efforts to saving the species. (27.06.2016)

A 25-year-old sea turtle called Omsin - "Piggy Bank" in Thai - died after two surgeries to remove a large amount of coins from her stomach, veterinarians in Thailand said on Tuesday.

The green turtle underwent a pioneering seven-hour-long operation earlier this month to remove 915 coins that she had swallowed after tourists tossed them into the pond where she lived.

She was thought to be recovering well from the surgery when she took a turn for the worse over the weekend. Piggy Bank received an emergency operation on Monday, but slipped into a coma thereafter.

"At 10:10 a.m. she went with peace," Dr. Nantarika Chansue, the vet in charge of Chulalongkorn hospital's aquatic research center, told reporters on Tuesday.

"She is my friend, teacher and patient," the vet added.

The space left by the removal of the coins in Piggy Bank's stomach caused her intestine to become strangled and blocked blood flow, the vets said. An acute infection in her intestine then caused a blood infection.

"She at least had the chance to swim freely and eat happily before she passed," Dr. Chansue added. 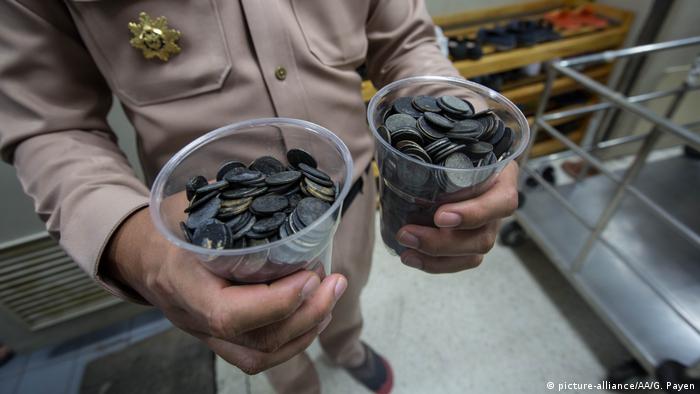 Around 915 coins were removed from Piggy Bank's belly

The vets also said they would perform an autopsy on Piggy Bank as a case study to help the treatment of turtles in the future.

The sea turtle lived in a pond at a public park in Chonburi Province. Visitors and tourists frequently tossed coins into her bond seeking good luck.

The sick turtle's plight was reported on in precise detail in news updates and captured the hearts of many Thais. Her case also raises questions over the conflict between traditional beliefs in good luck and animal welfare in the country.