A Thai committee has revealed a new constitution draft which calls for an appointed senate and the possibility for an unelected premier. Prior to the draft's release, the military banned criticism of the proposal. 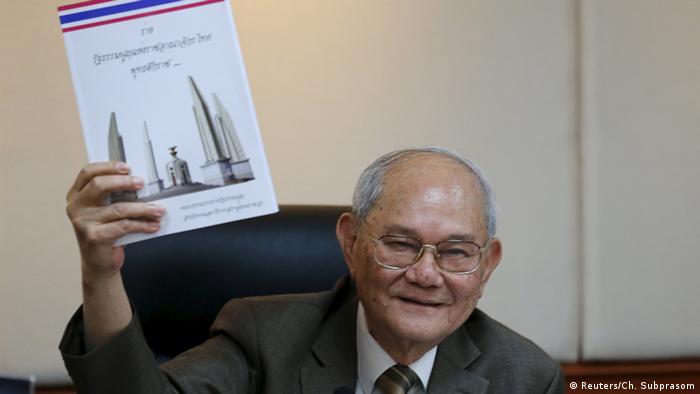 Constitution Drafting Committee head Meechai Ruchupan proclaimed that "the drafting of the constitution is done," on Tuesday as he presented the documents to reporters. The draft will be put to a national referendum on August 7 this year.

The contentious draft was deliberately presented at 1:39 p.m. local time on March 29. The number nine in Thai is pronounced "gao" which sounds like the word for "advance," mirroring the military government's proclaimed hope that the draft will speed up Thailand's return to democracy.

"The constitution is not meant to give sole power to citizens but to ensure the well-being of the citizens," said Meechai, 77, told the press during the formal handover.

The presented charter contains provisions for a new senate where the junta would appoint all 250 members, leaving six seats open for the heads of the armed forces. This appointed senate would check the powers of lawmakers during a five-year transitional period following the first elections.

"The senate will serve in an advisory capacity and when there are problems within the House of Representatives will step in for a joint session of both houses," Meechai said.

In addition to an appointed senate, the draft also includes a path for a parliament-selected premier.

"We have included an avenue" to a unelected premier, he said. "If there's no reason to use this clause, then it won't be used. It will be up to the elected MPs." The new prime minister could be selected if over 250 members of parliament support the motion and if it is subsequently approved by a joint session of the lower house and the appointed senate.

Constitution 'at the expense of democracy'

Politicians on both sides of Thailand's divided politics oppose the constitution draft, saying that it will enshrine the military's influence. They also doubt that the constitution will resolve the country's bitter political disagreements.

Paul Chambers, a Thailand-based academic, agreed with the critics and said the draft will actually prolong army rule and establish a "frail democracy" which would be easily controlled by a junta-stacked senate.

"It is a charter which expands military and judicial power at the expense of democracy," he told news agency AFP.

"Because of the transition period outlined in the new charter, military rule in Thailand could well extend to eight years: 2014-2017 of direct military rule; 2017-2022 of military veto power" through the Senate, he added.

Prior to the constitution draft's release, the military government banned criticism of the proposal, going so far as to detain a politician over a Facebook post which called for junta chief Prayuth Chan-ocha to resign if the constitution is rejected during the referendum.

Prayuth restricted free speech in Thailand since the 2014 military coup. He also banned public protests alongside other civil liberties crackdowns.

The military staged a bloodless coup in May 2014 following months of street demonstrations in Bangkok - the latest in a long cycle of military removals of elected governments in Thailand.

Since it seized power last year, the Thai military has been ruling the country without success. While Thailand finds itself increasingly isolated internationally, criticism of any sort is punished with harsh sentences. (14.12.2015)