Telling the story of Aceh in Berlin

A recent literary salon brought together an Indonesian writer and a German-Indonesian musician. 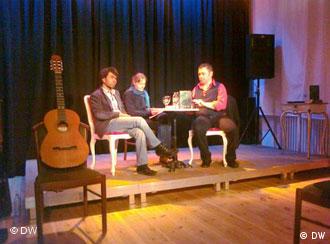 The audience at the Kulturhaus Mitte in central Berlin was small but enthusiastic, eager to discover what an evening of Indonesian poetry and song would entail.

Tomi Simatupang launched into a wistful folksong about coming home. Born in 1980 in Indonesia, Tomi spent much of his childhood in North-Rhine Westphalia. Today, he lives between two worlds, two cultures – missing Indonesian food while in Germany and organic shops while in Indonesia. 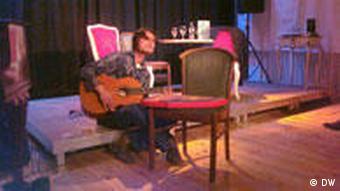 His musical tastes range from folk to rock, and he plays guitar, the drums, the sitar all as well as he sings. His songs (in English, German and Indonesian) are about love, about politics, about life. "I like Miles Davis' idea of 'social music'," he says, explaining that he plays to the audience and the important thing to him is the connection.

One could say that Azhari produces "social writing", works that have an educational function, connecting the reader with the wider world. He describes himself as a troubadour who passes on his impressions.

Wanted to tell his friends stories

The "author of Aceh" was born in Lamjamee, a small coastal village not far from Banda Aceh, in 1981. His family was poor but he went to school. A children's book revealed to him the fascination of reading. He began to write because he wanted to tell his friends stories.

The military presence in Aceh as he was growing up was very evident. He even learnt to speak Bahasa Indonesia with the children of policemen and soldiers who were stationed there. 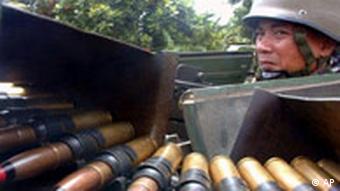 However, he and other children did not really understand the situation. They, like much of the Acehnese population, were caught between two enemies – the Indonesian army and GAM, the Free Aceh Movement.

Another way of dealing with the situation

As Azhari grew up, he became an activist himself but says the lack of humor pushed him to find another means of dealing with the situation, with the daily reports of torture and death, to find another way of telling the story.

His 2003 collection of short stories Perempuan Pala (Nutmeg Woman was published in English in 2004) deals with the impact of the conflict on ordinary people.

"My book is about the women and children and what happened to the fathers. The women did not know what to tell their children and their stories became fairy-tales."

Azhari was awarded the Free Word Award by the Netherlands-based Poets of All Nations in 2005 for the work and for his social engagement.

He studied literature in Banda Aceh and set up the Tikar Pandan Community with some of his friends. The NGO was conceived as a space to raise political and cultural awareness, as well as to help children and adults learn to write and read.

But on 26 December 2004, the tsunami struck, killing Azhari's parents and his sister, as well as approximately 170,000 other Acehnese. 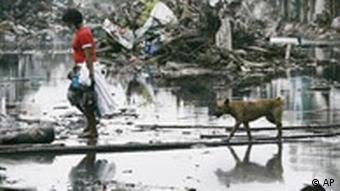 Azhari could no longer write. He was overwhelmed with grief, anger, aggression. Eventually, he explains, he understood that his only way of coping was to be like the people in the same situation, in his village, where nobody had a better or worse fate.

He and his friends revived their cultural community and decided to live together so long as there were still tsunami refugees living in temporary accommodation. He became an outspoken critic of the reconstruction efforts.

How to get rid of an "unwanted gift"?

Moreover, he started writing again – about the political situation in Aceh today, for example. "Instead of a solution for injustice, poverty and gender imbalance, hardcore Shariah came," he laments.

"The Acehnese didn't want Shariah law. They wanted independence. Now it's difficult for them to get rid of this unwanted gift."

This seems the right moment for Tomi Simatupang to perform again. His song is about an "unbeliever down to burning hell" who receives an unorthodox marriage proposal from a 17-year-old woman who fears no good man will want her hand.

Azhari jokes that maybe women are neglected in Aceh today because GAM also means "man" in Acehnese. The governor is a former GAM fighter.

Azhari is currently working on a historical novel about pirates. He thinks he needs time before he is ready to confront the tsunami in his writing.

He says that despite the tragedy, "there were good consequences for Aceh, which came out of cultural, political and social isolation." There would be no peace today without the tsunami.

A report published by Human Rights Watch this week has once again highlighted the continuing influence of the military in Indonesia. More than 10 years after military dictator Suharto was forced to leave office, the armed forces still control a considerable business empire. Behind the scenes, they also retain a say in politics. (15.01.2010)