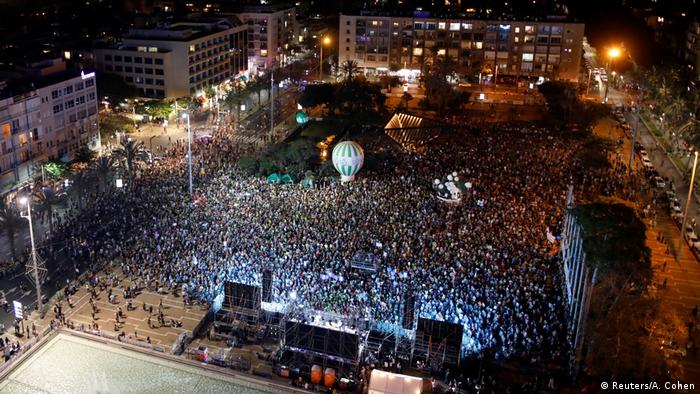 Israeli supporters of a Palestinian state alongside Israel, including the non-government group Peace Now, heard a written message from Palestinian president Mahmud Abbas that it was time for both peoples to "live together in harmony."

It was read out at the Tel Aviv rally, where the turnout was 15,000, according to the Israeli newspaper Haaretz.

"It is time to live together in harmony, security and stability," Abbas was quoted as saying.

Early this week, Netanyahu hosted US President Donald Trump, who also visited East Jerusalem's Western Wall and Abbas in Bethlehem in the occupied West Bank, but made no specific mention of the two-state model.

In June 1967, Israel seized the West Bank and east Jerusalem from Jordan during the so-called Six-Day War withneighboring Arab-majority states.

Israel's later annexation of east Jerusalem was never recognized by the international community.  Palestinians claim the city's eastern part as the future capital of their anticipated state.

Netanyahu's right-wing government has pressed settlement in the West Bank despite international legal objections, raising the settler count to beyond 400,000.

'Lack of hope' being perpetuated

Peace Now head Avi Buskila said Saturday's rally was to protest what he termed "the lack of hope being offered by a government perpetuating occupation,  violence and racism."

"The time has come to prove to the Israelis, the Palestinians and the entire world that an important segment of the Israeli population is opposed to occupation and wants a two-state solution," Buskila said.

Saturday's rally coincided with the start of the Muslim holy month of Ramadan and the end of a hunger strike by hundreds Palestinian prisoners in Israeli jails.

The Middle East peace process has been deadlocked since April 2014 when indirect negotiations led by then US secretary of state John Kerry collapsed.