The head of Tanzania's main opposition party has been detained after calling for nationwide protests over last week's presidential election. The opposition has demanded a fresh vote amid allegations of vote-rigging. 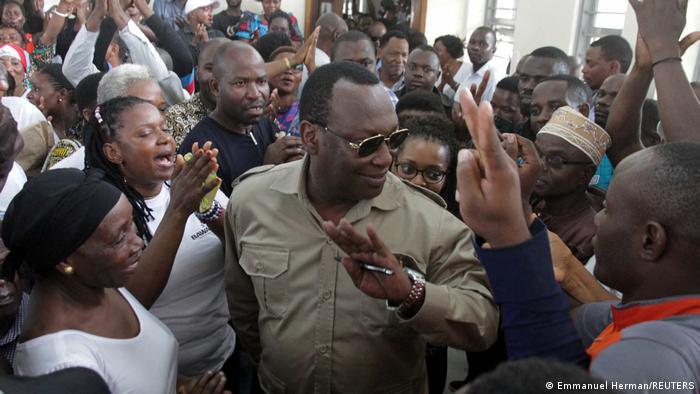 Police in Tanzania arrested the leader of the country's main opposition party and several other top political leaders ahead of planned protests on Monday.

Authorities said they detained Freeman Mbowe, the chairman of the opposition party Chadema. In recent days, he'd called for countrywide protests on Monday as well as a fresh election.

"We have arrested Mbowe, he is in our hands," said Dar es Salaam police chief Lazaro Mambosasa. He added that six other top members of the party were also under arrest.

Police said the leaders were accused of planning "illegal demonstrations."

"On top of these protests which we banned, they wanted to incite the vandalization of buildings, burn petrol stations, markets and public transport vehicles," police chief Mambosasa said. "Any person implicated in the planning of illegal protests will be arrested and will face justice."

Official results showed the incumbent head of state picked up 84% of ballots cast. The ruling Chama cha Mapinduzi party also picked up 97% of the seats in parliament — which would be enough to change the country's constitution.

Over the weekend, the leaders of Chadema and another opposition party, ACT-Wazalendo, urged their supporters to come out in large numbers to peacefully protest and demand fresh elections.

An East African Community observer mission said on Friday that the election was "conducted in a regular manner," although the US embassy in Tanzania said there had been credible allegations of intimidation and fraud.